Last year, I read and reviewed three mystery novels by John V. Turner, published as by "Nicholas Brady," which are part of a little-known, lamentably short-lived series about a passionate botanist and amateur criminologist, Rev. Ebenezer Buckle – who shined as a gumshoe priest in The Fair Murder (1933) and Ebenezer Investigates (1934). This once expensive, hard-to-get series was rescued from obscurity by Black Heath and they recently reprinted another series of forgotten detective stories by Turner.

Between 1932 and 1936, Turner penned six detective novels, all of them published under his own name, which stars a solicitor and fisherman as its series-detective. 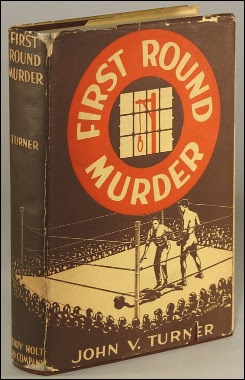 Amos Petrie is a short, five feet four, bespectacled man with an exhaustive knowledge of angling and has the habit of rubbing his hands on a huge, gaudy handkerchief every two minutes. He also has a proclivity of making riddles out of questions and conundrums out of riddles. Admittedly, this makes Petrie little more than an assortment of unusual character-traits and ticks without a real personality of his own, but he serves his purpose as a "Great Detective" who can get to the bottom of seemingly insoluble murder cases – such as the impossible poisoning of a boxer smack in the middle of the ring.

Death Must Have Laughed (1932) was published in the U.S. as First Round Murder and concerns the death of the middleweight champion of the world, Al Fanlagan, who has been undefeated in nearly "a hundred fights." A ruthless winning streak that earned him the moniker of "the Great Unbeatable."

The story begins on the evening of Fanlagan's title defense against Archie Polder at the Albert Hall, but the title bout is preceded by three, emotionally-charged rows in his dressing room.

Firstly, Fanlagan tells his manager, Harry "Socker" Mottram, in no uncertain words that he no longer has any use for them, which does not sit very well with the grizzled, in-ring veteran. Mottram had slugged his way to the lightweight championship in "the hazy, distant past" and had made an unbeatable prize-fighter out of his protege by teaching him how to hit "like nobody's business" with both hands, because before that he had been a right-handed, one-trick pony – who was "absolute cold meat" for any opponent with a left hand and a pair of fast feet. And now the old, broken down ex-champion is being cast aside by his golden pupil.

A second confrontation happens when one of Fanlagan's many women, Miss Doris Shannon, turns up in the dressing room. Miss Shannon had been very much in love the "coarse champion of the ring," but Fanlagan tells her he's through with her and she retorts by telling him that it would be better for everyone around him if he simply died. The third row came with the arrival of Edward Franklin, an eminent toxicologist, who demands that the boxer stops seeing his wife. Fanlagan yells at him to go to hell and Franklin tells him he'll be there long before himself.

Words that'll turn out to be somewhat prophetic when "the champion of the whole globe" goes down in the first round and doesn't get up again. At first, it looks as if Polder has slammed the champion into oblivion in less than three minutes, but then the Master of Ceremonies addresses the crowd with a grave announcement: Al Fanlagan has passed away.

So he had "three rows, one fight, and then the mortuary" on his last night and this brings Amos Petrie, who was in the crowd, to the ring and he's soon joined by his policeman friend, Detective Inspector Ripple of Scotland Yard – who are faced with a crime that "looks more like a miracle than a murder." Fanlagan's ate his last meal five hours before the fight and had his last drink three hours before he got through the ropes, but the poison that killed him acted within two or three minutes. And nothing he touched showed the slightest trace of poison. So how did the murderer administrate a lethal, fast working poison to a boxer who's in the middle of a fight?

Overall, the plot and the explanation for the impossible poisoning are pretty easy to pick apart. However, it took me a while to get around to the obvious explanation, because I was nursing a pet theory and the first quarter, or so, appeared to confirm my educated guess – which turned out to be completely wrong. You see, I assumed the poison was dabbed on the boxing gloves of Fanlagan's opponent and this pet theory looked to be confirmed when it was revealed that the poison in question can kill "whether a person smells, swallows or takes the acid on their skin." So this anchored the theory in my for the first half of the story and even pegged Polder's American manager as the murderer. Polder was too broken up about what happened and wanted to retire, but his manager had a gem of a motive. 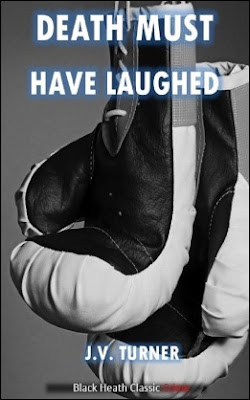 Fanlagan was a ruthless fighter with a killer temperament and a reputation of physically, and mentally, whittling down his opponents and in the "alleyways of the boxing world were many shadows who had crossed gloves" with the champion – men with broken bodies and spirits who cursed the day Fanlagan was born. So whoever ended his winning streak would not only win a championship title, but a reputation that brings in buckets full of money. An unscrupulous manager might have seen an opportunity here and used poison-smeared boxing gloves to ensure his client's opponent would go down for the long count.

I suspected this would turn out to be a boxing murder, through and through, with all of the personal motives and suspects being nothing more than red herrings. Well, I was completely wrong, but I hope you liked my reading false solution. And I began to catch on the truth halfway through the story. Hey, better late than never. Anyway, the actual solution turned out to be more practical and less dangerous than my solution.

My only real complaint about the poisoning is that the pathologist missed that during his initial examination of the body. Particularly when looking for poison, but that's a minor offense that can easily be forgiven. What's not as easy to forgive is how Petrie conducted himself towards the end of the story, which is even worse than Dr. Gideon Fell's behavior in John Dickson Carr's Death Turns the Tables (1941), in which he allows the shadow of suspicion of the (officially) unsolved murder to fall on an innocent person – only Petrie went a step or two further than Dr. Fell. Petrie allowed one of the suspects to sacrifice his, or her, life, in order to save the murderer, only to turn around and hand over that person to the authorities. Not only that, he actually prevented the actual murderer from committing suicide. Or so it appears. Maybe I read too much into these scenes, but Petrie didn't emerge from them like an overly sympathetic character.

Regardless, this is only a small blotch on a pleasantly written, leisurely paced detective novel with a truly grand stage for an impossible murder and that's what makes Death Must Have Laughed an interesting title for every locked room reader. The story also made me wonder whether there are any detective stories from this period that take place in the “squared circle” of professional wrestling. Now that would make for an interesting mystery novel with a cast of truly unique and odd characters! Just imagine a classic detective story filled with character reminiscent of Gorgeous George, Ed "The Strangler" Lewis and Andre the Giant.

Anyway, Death Must Have Laughed turned out to be another interesting, if imperfect, discovery from the ever-expending catalog of Black Heath Crime Classics. Hopefully, they'll republish more obscure impossible novels in the future. It would be great if they would focus some of their attention on the work of a specialized locked room writer, like Anthony Wynne, because I think we would all welcome affordable editions of Sinners, Go Secretly (1928), The Case of the Gold Coins (1933), Door Nails Never Die (1939) and Emergency Exit (1941).

So, if someone from Black Heath is reading this, please consider a (locked room) writer, like Wynne, for a future run of reprints. I can assure you that I would not be the only one who would appreciate that.
Geplaatst door TomCat on 4/02/2018