Murder at the Tokyo American Club (1991) by Robert J. Collins

The Tokyo American Club was founded in 1928 by "a group of American and Japanese businessmen" as "a facility for family dining and social intercourse" and the club only ceased its activities during "the 1941-45 misunderstanding," but by 1947 they were off and running again – one of the club's former presidents used the place as a setting for a detective novel. Robert J. Collins is an American author who became a resident of Japan in 1977 and served as the president of the Tokyo American Club from 1984 to 1990. 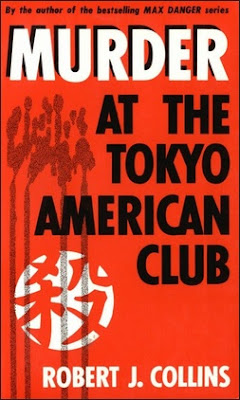 Captain "Tim" Kawamura of the Azabu Police Department was brought up on "a collection of dog-eared British mystery books" and this helped develop a linguistic talent, which proved to be a useful and helpful skill. Bilingualism was still "a special and relatively rare gift" in Japan. So the police had approached Kawamura with an offer of permanent employment and assign him to handle "whatever it was that had happened among the foreigners" in Tokyo.

Firstly, I have to point out the dedication of the book, which acknowledges someone named Cork, who had "the kindred spirit to publish this as a newspaper serial before anyone, including the author, knew the outcome" – which explains the stronger and weaker points of the story. I was unable to the find the name of the newspaper that originally serialized Murder at the Tokyo American Club, but my suspicion is that it might have been in The Japan Times.

Captain Kawamura is summoned to the Tokyo American Club where a gruesome, double murder was discovered during the annual dinner.

Out in the courtyard pool, at the bottom of the shallow end, a severed head was gently bobbing and rolling, while at the deep was a formally clad torso of a man. There is, however, one puzzling problem: the head is identified as the club manager, Pete Peterson, while the torso belongs to a Japanese man. One thing Collins got spot on is the tendency of Japanese detective stories to toy around with severed body parts, e.g. and Akimitsu Takagi's Shisei satsujin jiken (The Tattoo Murder Case, 1948) Soji Shimada's Senseijutsu satsujinjinken (The Tokyo Zodiac Murders, 1981). Something I have come to refer to as Corpse Puzzles.

Despite the gruesomeness of the murders, the story is written in a humorous, tongue-in-cheek way that looks at the life of expatriates living in Tokyo. The writing is definitely the strongest aspect of the book, but the very short chapters, showing its origin as a newspaper serial, prevents the plot and characters from fully developing to their full potential – giving you the idea that you're reading a first draft based on a plot-outline that needed polishing. And it's the plot in particular that suffers from this.

However, I have to give Collins props for coming up with an answer as to how a severed head and a headless torso, belonging to two different men, ended up in the swimming pool. Collins even inserted an interesting clue of a cold body suddenly becoming warm again, but the drawback of this explanation is that it required a lot of coincidences and moving about. By itself, this flaw could have been easily forgiven, as it fitted the tone of the story, but the plot has some problems. One of these problems is that Collins made the same mistake Craig Rice made in Having Wonderful Crime (1944). He completely underestimated how difficult and bloody beheadings are when a knife or cleaver is all you have to work with.

A good example of this is the account of one of the two murders and tells how the murderer "swung the knife down" on the back of the victim's neck and the head simply fell off. Just like that! This is where the plot becomes hard to defend, because where the head landed is one of those unbelievable coincidences that already asks a lot from the reader to accept. And it didn't help that it was later explained that the murderer did not really respond to this coincidence by saying this person was not the right frame of mind at the time. You won't say!

A second problem concerns the missing, headless body of the club manager, Peterson, which doesn't turn up until the final page of the story, but how did the police miss finding it in such an obvious place? I remember it was being said that every nook and cranny of the club was being searched. So why did it not turn up sooner or did I miss something? Like I said, the plot sometimes felt as a first draft of a plot-outline that needed more work and fine-tuning.

So you can hardly qualify this book as a Westerner's take on the shin honkaku school of detective fiction. That's a real shame, because the potential was there.

Still, Murder at the Tokyo American Club was a fast, fun read, but more for the writing and the backdrop of expatriates in Japan than the actual characters or plot. This will, however, not deter me from giving Murder at the Tokyo Lawn Tennis Club a shot sometime in the future.
Geplaatst door TomCat on 4/05/2018