The Theft and the Prophecy: Two Fictional Impossible Crimes

In my previous blog-post, "The Ghost and the Canary," I covered two real-life examples of the impossible crime story and decided it would be a nice touch to follow it up with a look at two fictional locked room problems. There happened to be two, relatively short, works lingering on my big pile. So let's dig in!

Barry Ergang is the former editor of Futures Mystery Anthology Magazine and received a Derringer Award from the Short Mystery Fiction Society for the best flash story of 2006, titled "Vigilante," but on the web Ergang is perhaps better known as a reviewer and member of various mystery-themed groups – such as the now sadly erstwhile JDCarr messageboard. You can find his reviews all over the web, like the GADWiki, which also hosts his parody of "Dr. Gideon Fell, Hardboiled Sawbones" (2003). 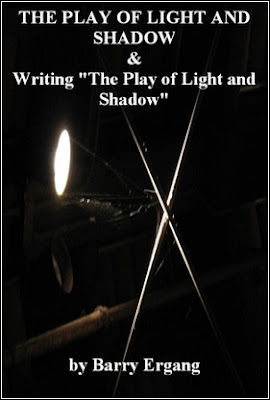 I think Ergang's hardboiled take on one of detective fiction's foremost experts on the locked room puzzle foreshadowed a short story he would come to write only a year later.

"The Play of Light and Shadows" was originally published in Futures Mysterious Anthology Magazine, vol. VII, Issue 35: Autumn 2004 and Patrick Ohl accurately described this short story as "a traditionally-told hardboiled story" in his 2011 review. The story is narrated by Dr. Alan Driscoll, a university professor, who's on a sabbatical to escape from department politics and "the hermetic insularity of academia" at the City University of Philadelphia. So to re-familiarize himself with the real world he takes job as a bartender and there he strikes up an acquaintance with a private-eye.

Darnell is a stern man who has no time for small talk, but "discussions about books pierced his reserve" and "evoked a veiled passion." When the story opens, Darnell is sitting at the bar reading The Sound and the Fury. This reminded me of Bill Pronzini's popular private-eye, "Nameless," whose undying love for pulp magazines has even driven the plots of some of his most well-known, highly praised cases – like Hoodwinked (1981) and Bones (1985). Interestingly, they're are perhaps two of the best known examples of the hardboiled locked room story.

However, this story is only indirectly influenced by Darnell's veiled passion for literature and comes about when Driscoll asks how business is going. Darnell simply taps his book and says that he has "lots of time to read."

Well, Driscoll got a phone-call from a colleague, Dr. Barton Gaines, who's the Chairman of the Art History Department and he could really use a detective.

Dr. Gaines is hosting a party the following Saturday afternoon to celebrate the acquisition of a painting by Charles Riveau, entitled Nomad, but the painting came with a back-story and concerns the criminal past of its creator – who once acted as a master forger to an Arséne Lupin-like thief, Paul Marchand. Riveau forged masterpieces, but, instead of selling the forgeries, Marchand "stole the originals from private collections or museums" and "substituted the fakes." However, the police eventually caught up with Riveau and did a spell in prison. After his release, Riveau continued to paint and his original work started to gain a reputation. So he turned down Marchand when he wanted to revive their old partnership, but this disagreement ended with Marchand promising he would destroy all of his original work "to prevent him from attaining the fame he desperately wanted."

Ever since, paintings have disappeared from galleries, museums and the homes of collectors. And this is exactly what happens during the party.

The gallery is a long, wide, white-walled and marble-floored room without windows and the door offered its only way in or out of the gallery, which can only be opened with a set of specially-made keys that can't be duplicated. After the gallery is searched, the door is locked from the outside and Darnell takes his place guarding the door, but when the gallery is unlocked and guests stream in they make a startling discovery – someone, somehow, spirited Nomad from a hermetically sealed and guarded room! But this is not their only problem.

A photographer who was present at the unveiling of the painting, Derek Trevor, is found with a camera-strap looped tightly around his throat and the murderer has taken a 3.5" disk from his photo camera. On a side-note, these diskettes were the predecessor of memory cards. 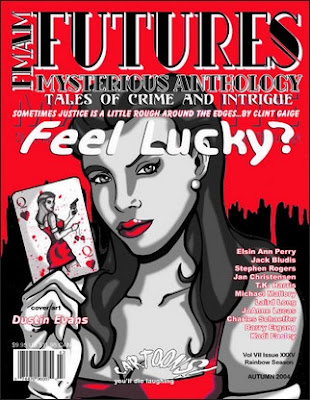 The writing and characterization clearly shows the influence the private-eye genre had on Ergang, who holds Raymond Chandler's The Long Good-bye (1953) in very high regard, but the plotting also betrays a weakness for cleverly clued, puzzle-oriented locked room mysteries. Ergang planted clues and hints throughout the story subtly nodding in the direction of the solution, which is always a pleasant discovery in a modern detective story, and the excellent writing and dialogue makes "The Play of Light and Shadow" anthology material.

There is, however, one (minor) problem I have with the premise and explanation for the impossible theft, which seems to be indebted to the Jonathan Creek episode The Scented Room (1998). An episode that had lifted its plot directly from Edgar Wallace's "The Stolen Romney," collected in Four-Square Jane (1929), which had been spoofed before by Robert Arthur in The Mystery of the Vanishing Treasure (1966) – all four deal with a very similar impossible theft and the explanations play around with the same ideas. Only difference between the Jonathan Creek episode and the novel and short story by Arthur and Ergang is that they put their own spin on the ending of "The Stolen Romney."

So I was glad to discover Ergang took a different direction with his solution, but the close resemblance of the plot to those other impossible crime stories took some of the shine off the story. Regardless, "The Play of Light and Shadow" is a well-written, tightly plotted detective story and a welcome addition to that lamentably short list of hardboiled locked room mysteries.

The second story, or rather a novella, comes from the hands of an incredibly prolific British writer of detective and thriller novels, named Gerald Verner, who was frequently compared to the previously mentioned Edgar Wallace and was noted for his "exiting, fast-action plots" – some of them "recognized as classics of the locked room and impossible crime genres." I don't remember anyone ever hailing Verner as a long-overlooked locked room artisan, but any mention of an impossible crime arouses my curiosity. And one of his impossible crime stories just happened to be in print!

A warning to the reader: my review necessitated something that can be construed as a spoiler, because the plot warranted a comparison with a fairly well-known detective novel by a very famous mystery writer. So, if you have read that fairly well-known mystery, you can probably guess the central idea behind the impossible murder from this novella. The reader has been warned!

The Beard of the Prophet (1937) was originally printed in a November, 1937 issue of Detective Weekly No. 246, later collected in Mr. Budd Again (1939), but was curiously enough reprinted separately in 2011 by Borgo Press. I believe our friend, Philip Harbottle, had a hand in getting Verner's work back in print. 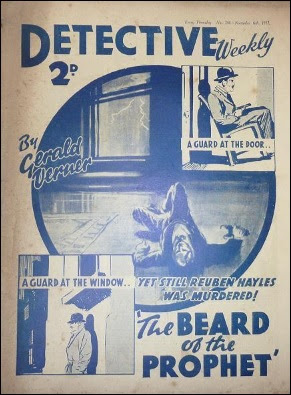 One of Verner's series-character is Robert Budd, an obsese Detective-Superintendent of Scotland Yard, who has deceptively sleepy-eyes, a plodding mind and a taste for beer. Budd is assisted by the melancholic, slow-witted Sergeant Leek and is often "the butt of Mr. Budd's biting sarcasm." These two unassuming, now long-forgotten detective-characters had a long shelf-live. Butt and Leek appeared in more than twenty novels and short stories between 1934 and 1966.

The Beard of the Prophet begins with a series of threatening letters addressed to a celebrated archaeologist, Reuben Hayles, who claimed to have discovered the tomb of Mohammed. One of the letters warned Hayles that his "sacrilege will bring violent death in its train," while another say that "every passing hour brings your doom nearer," but the last letter told the archaeologist "death will come to you on the night of the full moon" – signed The Prophet. After this very specific threat, Budd and Leek are installed in the household. A household filled the usual, and some very unusual, suspects, but their protection proved to be ineffective.

Budd stationed himself in front of the bedroom door and Lees was standing guard outside of the house, underneath the open bedroom window, but, shortly after Hayles wished Budd a good night, a scream and a thud is heard inside the room. Budd flung open the door and greeted by "a deafening crash of thunder," which is hoary, but nice, atmospheric touch. Hayles lay in the center of the room on ancient rug, a gaping wound on the front of his head, clenching a false beard in one of his hands!

Funnily enough, The Beard of the Prophet shares exactly the same strength and weaknesses as "The Play of Light and Shadow." After the opening chapters, it becomes patently obvious Verner had looked at Agatha Christie's Murder in Mesopotamia (1936) for inspiration and the locked room trick here mimics Christie's (semi) impossible alibi-trick. There's even an archaeological background in Verner's story.

So I doubt this was a mere coincidence, but Verner made the trick his own by tinkering with it and giving it a nifty twist. You can almost say this is the impossible crime version of the ingenious alibi-trick from Christopher Bush's Cut Throat (1932). And this alteration of the nature of the trick neatly tied-in with the identity of the murderer. So this definitely saved the novella from being nothing more than a shameless ripoff.

The Beard of the Prophet is perhaps not very original as a detective story, but Verner's treatment of the idea was transformative enough to make for an enjoyable read with a new variation on a trick we've seen before.

A note for the curious: the trick from Murder in Mesopotamia was also used in a 1950 short story by Charles B. Child, titled "All the Birds of the Air," which was collected in The Sleuth of Baghdad (2002). There you have a short story, a novella and a novel, which toy around with variations of the same (locked room) trick and have a Middle Eastern theme. I'm convinced Verner borrowed from Christie, but wonder how much of an influence she had on Child's short story. In any case, I find it fascinating that this particular trick turned up in stories with such similar backgrounds.

So, a short story and novella, written in two very different periods of time, but, when read back-to-back, turned out to strangely reflect one another. They both resembled more well-known impossible crime stories, which had preceded them, but the well-handled treatment of these older ideas pulled the stories away from being disappointing – especially the more original "The Play of Light of Shadow." Only thing you can hold against these two stories is that they failed to break new ground, but hey, I can easily forgive that.
Geplaatst door TomCat on 4/18/2018