Georgiana Ann Randolph is best remembered by her penname, "Craig Rice," which she adopted in the late 1930s when creating a triumvirate of hard-drinking, morally ambiguous, but comical, detective-characters as memorable as Erle Stanley Gardner's Perry Mason and Rex Stout's Archie Goodwin – earning her the title of Queen of the Screwball Mystery. An honorary title nobody to date has disputed and with good reason.

Rice was one of those rare mystery novelists who could write genuinely funny detective stories and her second effort, The Corpse Steps Out (1940), is arguably her best screwball mystery. 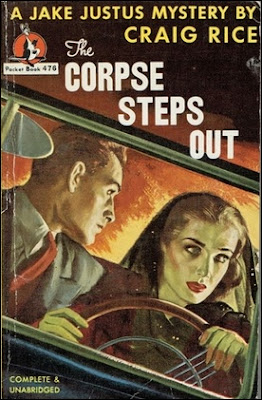 The Corpse Steps Out takes place one and a half year after 8 Faces at 3 (1939) and John J. Malone, Jake Justus and Helene Brand have gone their separate ways. However, they have a knack for attracting copious amount of trouble and this destined them to meet again, which happens when a client of Justus becomes involved in a blackmail plot with multiple murders and bodies being lugged around the city of Chicago – which makes this a darkly comedic, madcap chase story in the spirit of Carter Dickson's The Punch and Judy Murders (1936) and Norbert Davis' The Mouse in the Mountain (1943). All of this running around begins with the lead star of the Nelle Brown Revue finding the body of the man who tried to blackmail her with a stack of embarrassing love letters.

Jake Justus appeared in 8 Faces at 3 as a newspaper reporter, but has since gone into business for himself as a press agent and manager. When the reader meets him again he wonders why, with untold billions of people in the world, "everything had to pick him to happen to." Nelle Brown is a client of Justus and he sees it as his duty to keep her out of trouble. Even if it turns out she shot her ex-sweetie to pieces.

There are, however, complication and they crop up at an ever-increasing pace: one of these complications concerns the removal of the body from the kitchen of the crime-scene and the person responsible left a note for the landlady – asking her to sent the belongings to Honolulu, Hawaii. So that took care of one problem, but the love letters are still out there and these letters pose a greater threat for Brown's radio career than a potential murder rap.

According to Justus, radio reaches every household in America and "you've to keep it clean," because their sponsor would cancel the contract in "a minute if this thing broke the wrong way."

As you would expect by this point in the story, a second blackmailer rears his head and wants Brown to sign a personal-management contract, which means that he collects all of her income and pays her a weekly salary. A nice, legal way to apply an inescapable vise-grip on a blackmail victim, but this is not the only thumb-screw this second blackmailer tries to apply on the radio star. Brown is forced to perform in a secret audition for a prospective buyer of her revue, an out-of-town soap manufacturer, but at the end of the show they discover his body in the private room where he was listening to the show – slumped in a chair with a bullet in his head. So they did the only sensible thing you can do in such a situation. No, no, no. They did not phone the police. That would be silly. They dragged the body out of the studio, drove it to Lincoln Park and dumped the body on a bench. But the various blackmail schemes and rising bodycount is not the only source of comedy in this story.

After Justus is reunited with Helene Brand, a famous beauty, socialite and heiress, they decide to get married, but getting to knot tied is easier said than done and every time they determined to go to Crown Point to get married a monkey wrench, or two, is thrown into the work – such as getting chased by a squad car full of police officers with a body in the backseat. She even has to go into hiding until Malone can get an arson charge off her neck. Not to mention a case of body snatching, obstruction of justice, falsifying evidence and resisting arrest. 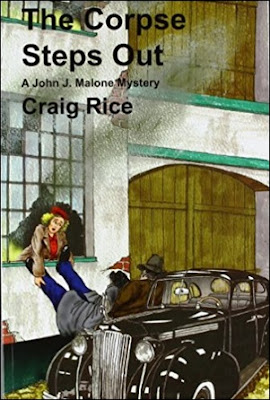 Well, you get the idea. The Corpse Steps Out is a fast-paced, rip-roaringly funny detective story, but this does not mean that all of the outrageous plot develops are played merely for laughs. There's method to Rice's madness.

There are three, convincingly motivated, shooting deaths in the story and the second murder, one committed in the radio studio, comes with a nifty, unexpected twist in the tail and this makes the plot rewarding as well as funny. But even the more serious aspects of the story are not devoid of humor. Rice mercilessly pokes fun at the type of 1920s detective novel John Dickson Carr criticized in his famous essay, "The Grandest Game in the World," in which the author makes the scene of the crime resemble a bus terminal at rush-hour as characters wander in and out of the room – leaving behind cuff links, bus tickets, handkerchiefs and cigarette ends. Justus observed at one point in the story that the first murder "seems to have been one of the major social events of the year," because "everybody was there." Everybody was walking in and out of the apartment as the victim was bleeding out on the kitchen floor.

My only complaint is that my favorite shady lawyer-detective, the incomparable John J. Malone, only has a very small role in the book.

Malone is basically just there to provide a solution when the time comes to wrap up the show, which is why some editions bill The Corpse Steps Out as "A Jake Justus Mystery." However, this does nothing diminish the sheer joy and clever aspects of the story. I would actually recommend readers who are new to Rice to begin with The Corpse Steps Out instead of 8 Faces at 3, because it gives you a good idea what Rice was capable of doing when she was in top-form.

Anyway, in my case, I'm glad that for once I saved one of the better entries in a series for last, which is not something that happens very often. There are, however, two posthumously, ghostwritten novels, The Picked Poodles (1960) and But the Doctor Died (1968), but they're considered to be piss-poor in quality and the latter was reputedly written as an attempt to cash in on the spy craze – except that this last "official" title in the series is completely devoid of Rice's trademark sense of humor.

So this only leaves me with a collection of short stories (The Name is Malone, 1960) and the three mystery novels she wrote as "Michael Venning," but those are stories I'll get to another time.
Geplaatst door TomCat on 4/21/2018