It's a Dog's Life

"They all agreed that it was a huge creature, luminous, ghastly, and spectral."
- Dr. Mortimer (Conan Doyle's The Hound of the Baskervilles, 1902)

There weren't a myriad of opportunities amidst the busy hum of the holiday preparations and celebrations to chip away at Mt.-to-be-Read, but now that life has snapped back to normal, it's time to pick up where I left off. And surprisingly, it's not a locked room mystery!

I was in the mood for a flippant, humorously inclined and, above all, a fast paced read to start the New Year, which brought me to The Mouse in the Mountain (1943) by the highly regarded pulp writer Norbert Davis – whose first foray in full-length novels garnered praise from the Austrian-British philosopher Ludwig Wittgenstein and introduced a pair of unique detectives to the scene. Doan is a short, plumb, low-end private eye with the imposing, fawn-colored Great Dane, named Carstairs, being the brains and strong arm of the duo. Oh, Doan knows how to shoot people! There is, however, a slight consequence to their unusual partnership in that it gives the books a slight nod to the borders of SF/Fantasy, because Carstairs is obviously capable of higher cognitive thought processes and basically the brave, literary ancestor of Scooby-Doo. I would even go as far as placing Carstairs in the detective lexicon alongside such notable snobs as Philo Vance, Lord Peter Wimsey and early-period Ellery Queen. 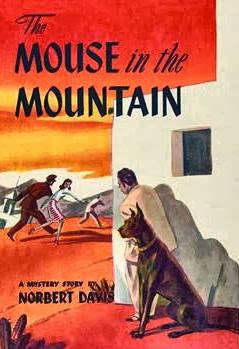 The Mouse in the Mountain can be categorized as both a World War II mystery, Carstairs is in the army training dogs to protect airfields and is now on furlough, and a Busman's Holiday, which begins before they can board a bus from the Hotel Azteca to the remote, isolated Mexican mountain village of Los Altos – in spite of being advised to cancel the tour for the time being by the local authorities. Doan and Carstairs meet their fellow passengers and the first they bump into is Miss Janet Martin, a schoolteacher following the trail of the long dead pioneer Lieutenant Perona, but there are also the Henshaws and their horrendous offspring, Mortimer. I honestly kept my fingers crossed someone would chuck Mortimer under the bus or tossed him to Carstairs as a chew toy. Happy New Year, by the way. The party is rounded out with a flypaper heiress, Patricia van Osdel, her gigolo, Greg, and personal maid, Maria, but the real star of this company is their driver. Bartolome is a licensed chauffeur and tour guide with "English guaranteed by the advanced correspondence school," adding, "conversational and classic," but uses these acquired skills to string together flowery insults – like calling his fat boss "a flesh-laden criminal."

While banter and comedic scenes mark the overall tone of the story, there's a dark undercurrent flowing from the personalities and motives of the characters. Even the most innocent characters are moral derelicts in one-way or another. Mrs. Henshaw's over-motherly, protective behavior created an uncontrollable monster and his father can only resort to idle promises to twist his neck. Van Osdel bribed the hotel to put the tour back on the road and Doan's reason for going to Los Altos is up for debate through out the story, but does not flinch in demonstrating his flexible morals upon their arrival by shooting a bandido under surveillance by the local authorities – represented here by Captain Emile Perona. Granted, it was a clear case of self-defense.

The Captain is a descendant of the man who captured Miss Martin's imagination and didn't conform to most of the stereotypes of the day, but this lovely subplot had the emotional depth of a low-budget, daytime soap opera. However, the way in which this plot-thread was tied up was, inadvertently, hilarious. Captain Perona is one of more honest characters in The Mouse in the Mountain, but Perona is vain with old-fashioned, aristocratic notions. The final bit was simply a portrait of an undaunted man who, after the first feminist wave subsided, calmly whisked out a discreet handkerchief to dab his face and mentally noted the day when it all really ended.

Anyhow, the arrival of the company at Los Altos brings along more than just rich tourists hunting for overpriced souvenirs, there's a boatload of trouble and a soaring body count in the surroundings of the once peaceful village – which also suffers under the tremors of a small earthquake. Doan's original quarry is killed when a roof collapses and the cause of a conflict of interest between the detectives, which leads to Doan and Carstairs being briefly incarcerated. The earthquake also gave cover to an opportunistic killer (and the exact opposite of the revealing quake in Bones (1985) by Bill Pronzini), but the plot never blazes with the same fire as the descriptions of the Mexican highlands or the crisp, witty hardboiled storytelling, dialogues and the (somewhat) morally decrepit characters. They were the real draws of The Mouse in the Mountain.

Note(s) for the curious: I've read the second Carstairs and Doan novel, Sally's in the Alley (1943), shortly before I began blogging, which left me with an unanswered question. Why didn't Carstairs smell the blood-spattered corpse in the boot of their car? Couldn't he be bothered or was prolonging the discovery of the body designed to cause as much discomfort to Doan as possible?

Carstairs may also be tagged as the ancestor of the soft-boiled, semi-comedic television series Kommissar Rex (Inspector Rex) – a krimi from Austria.