Paul Halter's La tête du tigre (The Tiger's Head, 1991) is the fifth novel, alongside a dusting of collected and uncollected short stories, to be translated from French into English by our very own purveyor of miracles – John Pugmire of Locked Room International. 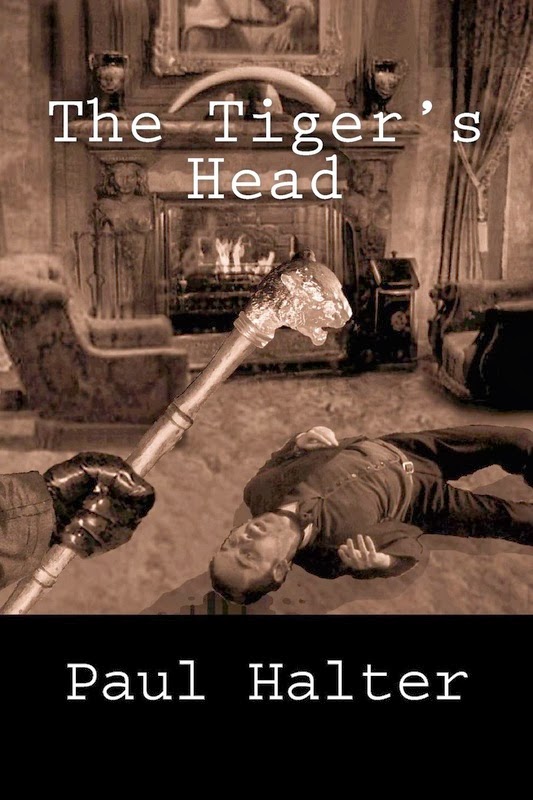 The first half of The Tiger's Head is divided between chapters entitled "On the Trail of the Suitcase Killer" and "The Leadenham Chronicles," in which we follow Dr. Alan Twist, Inspector Archibald Hurst and the inhabitants of a normal sleepy village before their respective problems collide in the second half. Twist and Hurst are tasked with roaming train stations for clues in a particular brutal murder case. Someone has been discarding suitcases containing the severed arms and legs of women, however, they've been unable to locate any of the heads or romps – which is not a case you'd think interest Twist. Until the "Suitcase Killer" strikes again in unfathomable circumstances.

Jenny Olsen is a flower girl of reputedly questionable virtue and was seen by her boyfriend, Tom Ross, entering her apartment in the company of a shadowy figure and flees to the nearest pub. A friend convinces him to go back and confront the bloke, but they find the door and windows secured from within. However, the lights are still on and the sound of running water can be heard. They force the front door and the place appears to be deserted, but someone turned off the water tap, made a bloody mess of the bathroom and left a suitcase behind – containing a severed set of woman's legs and arms. The murderer and the remaining body parts seem to have faded from existence!

Meanwhile, in the otherwise quiet and dormant village of Leadenham, another series of crimes are being perpetrated, but the petty thefts of chocolates, candles and hats are fairly tame in comparison with the Suitcase Murders. The best part of these so-called village chronicles is the introduction of the people who live there and those who'll be there for the second act. I have often criticized Halter's depiction of villages as nothing more than a small, tight cluster of houses where the suspects happened to be living for the purpose of the story (e.g. The Fourth Door, 1987), but here there's more of a communal feeling – even though the characterization remains on the surface.

Major John McGregor is one of Leadenham's citizens with a bagful of tall stories and anecdotes from his days in India, which includes witnessing the famous Rope Trick in person and an account of an unsolved murder case eerily similar to the suitcase murders.

The major finds a new audience for his tales with the arrival of his nephew, Jim, who's a professional tennis player and his fiancée, Evelyn Marshall, but there's also the engaged couple of Clive Farjeon and Esther Dove and the former adopts a skeptical attitude towards the stories. One of the prized items in Major McGregor's collections of swords and daggers is in fact a bamboo cane with a lump of bronze as big as a fist and shaped like the head of a tiger, which he won from a fakir in a crooked bet. It's said that the head of the tiger is the home of an ill-tempered genie and prone to violence after being summoned, especially towards those who refused to believe in him before appearing.

Major McGregor and Clive Farjeon lock themselves up in the lounge room and every possible exit is being guarded by their friends, which does not prevent something from viciously attacking both men with the titular cane – killing the major and seriously injuring Farjeon. However, there's nobody else to be found in the room afterwards! The nature of Farjeon's wounds clears him from suspicion and the actual solution was far cleverer, original and better executed than the first locked room murder, which had an intriguing set-up but a lousy explanation.

Plot-wise, The Tiger's Head is the most complex and ambitious novel I have read from Halter since La quatrième porte (The Fourth Door), but (alas!) this intricate braided rope of plot-threads has a few weak spots and flaws. It's so complex you can understand and forgive Halter for bringing luck and coincidence into the game, which were words too often dropped by Twist in the explanation. But in the authors defense... what an imagination! However, the real flaw in Halter's works (IMHO) remains the lack of sense of time (and often a place), which is not an unimportant aspect of stories set in the past. I wonder how different the writing in these stories would've been, if they had been set in France instead of England. Anyhow...

To sum this review up, The Tiger's Head is not a novel of crime that fleshes out characters by going over every minutiae of their life, with a dash of social commentary, but a detective story that takes great pride in being elaborate for the sake of being elaborate. I liked it in spite of some of its shortcomings.
Geplaatst door TomCat on 1/17/2014