Nocturne of Remembrance (2013) by Shichiri Nakayama

In my previous blog-post, I looked at Craig Rice's zany The Corpse Steps Out (1940), a madcap chase novel with method to its madness, but the plot only gave a minor role to one of my favorite characters from the American detective story, John J. Malone – a crumpled, hard-drinking Chicago lawyer with malleable ethics. So I was considering reading The Name is Malone (1960) or an Erle Stanley Gardner novel next, but then I remembered there was a shin honkaku mystery on my pile with an unscrupulous attorney as the protagonist. 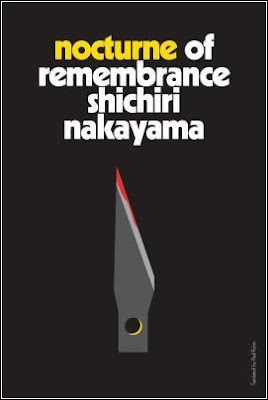 And, as to be expected from the Japanese, they took the concept of an unethical criminal defense lawyer as the anti-hero to the next level. Perry Mason, Arthur Crook and even that villainous hypocrite, Joshua Clunk, look like saints compared to Reiji Mikoshiba!

A translation of Shichiri Nakayama Tsuioku no nocturn (Nocturne of Remembrance, 2013) was published in 2016 by Vertical and is a sequel to the untranslated Shokuzai no sonata (Sonata of Atonement, 2011), which is what made the opening chapters a little bit confusing and muddled – as they dealt with past events. Apparently, Mikoshiba was attacked and wounded in his first recorded case "by the family of the opposite side," because he had the body of "the victim that the accused had murdered removed from the crime scene." The opening chapter also revealed a dark childhood secret.

A fourteen-year-old Mikoshiba had murdered and dismembered a child, littering the neighborhood with body parts, which earned the then unknown murderer the nickname of the "Corpse Delivery Man."

Mikoshiba was apprehended by the police, before he could dump the torso, but the law in Japan prohibits the identification of juvenile offenders and rehabilitation is preferred over punishment. So, upon release, Mikoshiba was able to resume a normal life and even carve out a name for himself as a criminal defense lawyer. I assume Mikoshiba's back-story was partially inspired by the real-life murder case known as "The Sasebo Slashing." The murderer in that case was an 11-year-old student who had slashed a classmate to ribbons and was referred to in official police documents only as "Girl A," but the internet bestowed a nickname on her that stuck with the case – namely "Nevada-tan." So you can hardly call Mikoshiba your ordinary, shady neighborhood defense lawyer and after getting discharged from the hospital he immediately blackmails a colleague into handing over a case to him. A kind of case he would normally never touch, let alone demand.

An abused, downtrodden housewife, Akiko Tsuda, has been sentenced to sixteen years in prison for the murder of her husband, Shingo Tsuda, who was stabbed to death in the bathroom of their home. The marriage had begun as a happy one and they had two daughters together, but their family life began to deteriorate when Shingo was laid-off from his software company. Shingo became a shut-in and poured all of his severance pay into the stock market, but the only thing he accumulated was debt. And this ended with him becoming physically abusive.

Obviously, the Tsuda affair is an open-and-shut case: Akiko had practically been caught in the act by her father-in-law and she gave a full confession to the police. So why does Mikoshiba insist on representing Akiko during a hopeless appeal process with no prospect of a fat fee. He simply tells the family to pay him whatever they can afford. Something that's very out-of-character for the shady lawyer.

This not only makes Akiko very suspicious, who regards him as dangerous, but necessary, tool needed to reduce her sentence and return to her two children, but also arouses the suspicion of Deputy Chief Prosecutor Kyohei Misaki and he decides to take on the case himself – who proves to be a formidable adversary for Mikoshiba. Misaki even has the upper-hand in the courtroom right up until the end when Mikoshiba slowly unfurls the truth, which hits everyone in attendance like a proverbial bombshell. And has reporters shooting out of the courtroom with "a precious scoop cradled in their arms." 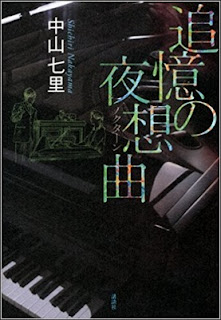 I think most seasoned mystery readers can probably make an educated guess about the solution and why our lawyer-detective picked this apparently hopeless case, but this only gives you a very rough outline of the plot. So pay close attention to the detective work done by Mikoshiba, which lays bare enough clues and hints to help you discern the finer details of the overall plot. One of these all important details is the dark, depressing motive of the murderer and the truth behind the stabbing places the story as close to the gritty crime novels of today as to the clever, plot-driven courtroom dramas of the past.

So, while it's not a entirely perfect, Nocturne of Remembrance is a perfect example of what the modern crime novel in the West could have looked like had coherent plotting and proper clueing still been a thing.

Ho-Ling Wong drew in his own review a comparison with the work of Keigo Higashino and certain aspects of the plot recalled Yogisha X no kenshin (The Devotion of Suspect X, 2005), which also succeeded in taking a grimy, sordid and everyday crime and structure it like a traditionally detective story – complete with clues, twists and a memorable detective character. Nocturne of Remembrance accomplished doing the exact same thing and demonstrated, when you have writer who knows how to plot and clue, how well a traditional detective story can work in a contemporary setting with pitch-dark material.

Sadly, the West has a chronic shortage of such mystery writers at the moment, but we can console ourselves with these little gems that reaches our shores from Asia. I sincerely hope we'll see more of Nakayama and Mikoshiba in the future. Until then, I can highly recommend Nocturne of Remembrance as a dark take on the Perry Mason-like courtroom drama with an excellent, well clued plot that should especially delight readers of Gardner and Higashino.
Geplaatst door TomCat on 4/24/2018