Murder Most Ingenious (1962) by Kip Chase

I really, really like impossible crime fiction and currently have more than four-hundred of my nearly nine-hundred blog-posts tagged with the "locked room mystery" label. It made me wonder how many of titles listed in Robert Adey's recently reissued Locked Room Murders (1991) I have read and, if would tally all of the novels, novellas and short stories, I would probably be able to cross out nearly 50% of this comprehensive bibliography of the locked room sub-genre – likely somewhere between 800-900 titles. And that's a conservative estimate.

In my defense, a good chunk of that number comes from prolific locked room practitioners like John Dickson Carr, G.K. Chesterton, John Russell Fearn, Edward D. Hoch, Arthur Porges and Bill Pronzini. I'll probably do a tally in the future. 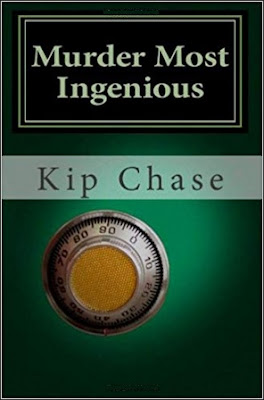 One title I can now scratch out is the modestly titled Murder Most Ingenious (1962) by "Kip Chase," a pseudonym of Trevett Coburn Chase, who wrote his first mystery novel, Where There's a Will (1961), on "a Remington portable typewriter on the fender of a Ford panel truck parked along the coastline of Trinidad." The book was published by a British publisher, Hammond, Hammond & Co, who ordered two more books, Murder Most Ingenious and Killer Be Killed (1963), which were "dictated to a tape recorder" while Chase commuted to his work – ending when his publisher was absorbed by another company that did not publish detective novels. So he only got to write three of them.

That's a damn shame, because Chase basically was a next generation Golden Age mystery writer who combined a more modern, up-to-date style of story-telling and characterization with a classical, traditionally-structured plot. The impossible crime element is practically unique. So let's dig in!

Hubert Goodall is an estate owner from Palos Verdes Peninsula, California, whose income from the family holding allows him to live in comparative luxury and run his own, second-rate art gallery from a building on the estate. A building that will play a not unimportant part in the story. Anyway, Goodall also "participated vigorously in civic activities" and is particularly concerned with keeping the Peninsula as it is, quiet en peaceful, which is why he turned to an unsavory character, Jock Harrison, who had survived "the wild, free-swinging prohibition days" – now he manipulated real estate deals, managed legitimate night clubs and dabbled in blackmail. Goodall wants Harrison to force a man, named Jack Christie, out of the Sleeping Hills Development. Simply to keep the peninsula as it is.

The subsequent chapters introduces the character who are, in various ways, connected to either Goodall or Harrison and will play their role in the impending murder of the former.

Firstly, there are the three heroic veterans of the Korean War of 1950-53, George Craig, Tony Ortega and John Williams, who came back from Korea with "a bucketful of medals" and the press had dubbed them The Three Musketeers. After the war, Craig became a painter and Goodall made him member of the Board of Directors of the Peninsula Art Association, which is a position he used to get Ortega a job in Goodall's art gallery. His lovely wife, Pat Craig, is a night-club singer with a past link to Harrison, but Williams, a genius when it comes to electronics, is only connected to Goodall and Harrison through Craig and Ortega. These are three very important characters in the overall story, but there are more: Geraldine and Jennifer Goodall, who are the wife and granddaughter of Hubert Goodall, but there's also the owner of the Swinging Times, Willie Delaney, and one of his waitresses, Jeanie. Both of whom are associated with Harrison. And Jeanie had a special role in the scheme to ensnare Christie.

However, before their blackmail scheme can be set in motion, Goodall is brutally gutted in the office of his art gallery and the safe had been drilled open, which happened to contain the only valuable picture they had on loan from San Francisco Coberly Collection – a Gauguin that had been neatly cut from its frame. Only problem is that the office can only be entered, or exited, through a corridor that goes pass a desk with an all-night guard. The guard swears nobody entered or left while he had been on duty and the man is put through the wringer by the police, but never deviated from his story. So Detective-Lieutenant Horowitz is stuck with a seemingly impossible knifing. 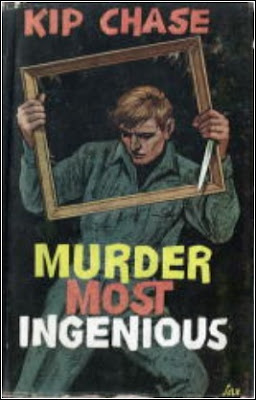 Fortunately, he gets help from a retired, wheelchair-bound colleague, Justine Carmichael, who used to be the well-known, highly regarded Chief of the Homicide Division. Despite his handicap and being far pass the retirement age, Carmichael is often called upon by his former colleagues as a special consultant and is paid from a special fund. Carmichael is pretty much a predecessor of the TV-detective Ironside.

Carmichael is not merely an armchair detective who reasons from a wheelchair. He drives around in a specially adjusted car to pay personal visits to suspects, views the body at the morgue and inspects the crime-scene on several occasions – picking up hints and clues to the murderer and method as he goes along. The clueing here is a dead giveaway that Murder Most Ingenious is a detective story written and plotted along classical lines punctuated by the excellent locked room situation of the gallery-office and its original solution.

Mike Grost mentioned on his website, when discussing Helen McCloy's The Further Side of Fear (1967), that "the late 1960s is an atypical era in mystery history for a writer to develop an interest in locked room puzzles." I think the entire 1960s is a period unlikely to be associated impossible crime fiction, but have come across quite a few over the past year or two. Some of them were quite innovative.

You have Robert Arthur's The Mystery of the Whispering Mummy (1965), The Mystery of the Vanishing Treasure (1966) and the massively underrated "The Glass Bridge" from Mystery and More Mystery (1966). A.C. Baantjer's Een strop voor Bobby (A Noose for Bobby, 1963), Leo Bruce's Nothing Like Blood (1962), Robert Colby's In a Vanishing Room (1961), Paul Gallico's Too Many Ghosts (1961), Robert van Gulik's The Red Pavilion (1961), Helen McCloy's excellent Mr. Splitfoot (1968), Martin Méroy's Meartre en chambre noir (Murder in a Darkened Room, 1965) and Donald Westlake's Murder Among Children (1967). And then there are the numerous short stories by Hoch and Porges. So it's interesting to see how many good locked room mysteries were actually being published during this dark decade for traditional detective-fiction. Who knows? Maybe John Norris was right that we were too hasty with completely writing off the sixties. He was right about the 1950s.

All in all, Murder Most Ingenious definitely lived up to its book-title. A cleverly written and plotted detective story that harked back to the glory days of the genre, but the ending also showed the dark grittiness of the modern crime story. And the reader got a glimpse of a darker, more dangerous, side of the gray-haired, wheelchair bound retiree. However, even that was more classical than modern, because the morally questionable action of Carmichael can be found as far back as Sherlock Holmes and (more memorably) used by such writers as H.C. Bailey, Gladys Mitchell and Rex Stout. Chase can now be added to that list.

Murder Most Ingenious well worth the effort of tracking down for fans of the traditional-styled detective story and the locked room mystery. You can definitely expect Chase to make another appearance or two on this blog.
Geplaatst door TomCat on 10/14/2018