The Kindaichi Case Files: The Murder in the Phantom School Building

Kindaichi Shounen no Jikenbo R (The File of Young Kindaichi Returns) series was serialized in Weekly Shônen Magazine from 2012 to 2017 and reviewed a number of stories that were adapted for the animated series, such as The Alchemy Murder Case, The Prison Prep School Murder Case and The Rosenkrauz Mansion Murders, but not all of the cases were used for the anime – some have very alluring premises. I noticed one of these unused stories combined an abandoned island setting with a treasure hunt, urban exploration, bloody murder and a pack of minutely-timed alibis. So I simply had to read it. 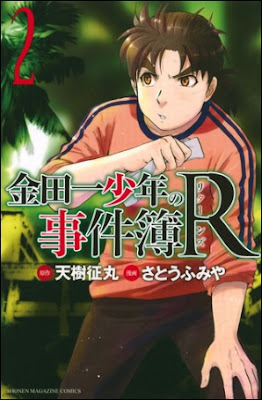 Gunkon Island on the Izu Peninsula is the backdrop of The Murder in the Phantom School Building, but is locally known under another name, Kogane (Gold) Island, which once held rich gold deposits and the small island prospered.

The island used to be crowded and resembled a busy town rather than a mining village. After this brief, prosperous period, the gold suddenly ran out and over two-thousand people left – turning the island into a godforsaken ghost town of abandoned ruins. And these ruins have a story to tell. Legend has it that there's "an estimated amount of 200kg in gold bars" secreted on the island.

A treasure rumordly stowed away by the Vice-Principal of Kogane Junior High School, Yuuki Genshou, who had worked on the island for over thirty years and was the only person who remained behind. This fanned the flames of the rumored treasure of gold bars, but the gold was never found and when two men from the mining company returned to the island, to confront him, all they found was "the shriveled, mummy-like body of the Vice-Principal" sitting in a chair – which promptly disappeared when the police arrived. Since a year, every month a group of people are given access to the island to poke around the abandoned ruins for the gold.

Miyuki had a bit of good luck when she, out of nowhere, secured two slots on the next expedition to the island and this means that Hajime Kindaichi is coming with her!

On the island, they meet the rest of the expedition: Akaguma Takeshi (tour guide), Tomoe Soujuurou (treasure hunter) and Kubiki Tomorou (supernatural researcher). The rest of the group consists of students who are members of a college urban exploration club (Ruins Explorer Club): Yamori Yukio, Kijou Ayuma, Hanaizumi Kyouya, Tsuruno Fuyuka, Tooma Moegi and Muronoi Ran. However, there are two other unexpected visitors. Inspector Kenmoichi and Superintendent Akechi arrive on the island under the guise of civil servants inspecting the place, but Kindaichi is soon informed by them that they received evidence that the "Puppeteer of Hell," Yoichi Takato, is going to be at the bottom of what is about to unfold among the ruins of Kogane Island.

For those who missed my previous reviews, Takato is a magician of crime who designs perfect murder plots for those craving revenge or long for private justice. So the stage is properly set for murder!

The group of treasure hunters uses the Kogane Junior High School building as a base and the place resembles an obstacle course for urban explorers. There are corridors blocked by rubble, stairways that have collapsed and rotting floors with holes in it. A feature that comes an integral part of the alibi-trick when the group hears over the wireless how one of the club members is murdered in the music-room, on the second floor, but the staircase has collapsed and they needed to take the long way round to reach the music-room, which takes a good six minutes – nobody within the group was out of sight for more than three minutes. Not enough time to take the long way round, commit the murder and return without being seen.

I think any astute mystery reader can piece together one part of this alibi-trick, but the second part is a lot trickier and borders on cheating, because it took more prep work than you can reasonable expect even from a fictitious murderer. And this probably why the Puppeteer was inserted into the background. It kind of justified this elaborate part of the trick. Still a good and even a somewhat original alibi-trick.

A letter was found inviting the victim to come to the music-room without telling anyone, signed "The Vice-Principal," which are followed by more letters asking the explorers to come to various locations in the school building – all of the letters came with a tiny piece of gold. But then the radio-transmitter vanishes, their boat is torched and two more names are added to the body-count. The last murder is a diabolical one with almost childish trickery to lure the victim into a deadly trap, but very well done and more believable than the first murder.

The Murder in the Phantom School Building has a solid premise with a great backdrop for a deadly treasure hunt and using urban explorers to pad out the cast of characters was interesting, but, besides the previously mentioned tricks, the plot was standard fare for the series. I easily spotted the murderer and the motive was the same old, same old. So, on a whole, the story is a not standout title in the series, but also a long-way from those at the bottom-rung. It's just very average.

So far this lukewarm review, but probably have something good again for my next post.
Geplaatst door TomCat on 10/29/2018