Nevada Barr is the author of a series of suspense-driven mystery-and thriller novels centering on the tribulations of a National Park Ranger, Anna Pigeon, beginning with the Anthony Award-winning Track of the Cat (1993) and seems to have ended with Boar Island (2016) – comprising of nineteen titles in total. A series "loosely based" on Barr's experiences as a ranger and partially inspired by the vividly written detective novels by the great Australian mystery writer, Arthur W. Upfield. 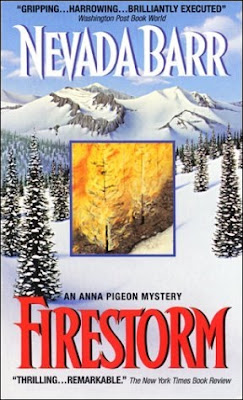 What lured me to this series is the inclusion of the fourth title, Firestorm (1996), in Brian Skupin's Locked Room Murders: Supplement (2019) with an original-sounding impossible crime, "death by stabbing of a victim apparently alone in a fire shelter." An inexplicable murder during a raging firestorm? It sounded to me more like the premise of a disaster/survival thriller than a proper locked room mystery, but, predictably, it still got my attention.

So I decided to look the series up and made some surprising discoveries that warranted further investigation.

My first surprises were Barr naming the traditionally overlooked, or ignored, Upfield as one of her favorite (past) mystery writers and the possibility that she has another locked room novel to her credit, Blind Descent (1998), which takes place in a dangerous, endless underground cavern system – not listed in Skupin's Locked Room Murders. This potentially second, unlisted locked room novel lead me to a third, pleasant, surprise when learning Barr often included "a very professional and useful map" in her stories. Honestly, the underground map from Blind Descent alone was enough to get it short-tracked to the snowy peaks of my to-be-read pile. So I knew enough to get myself a copy of Firestorm.

Firestorm opens on the tenth day of battle between an army of firefighters and California's "Jackknife Fire," which started near Pinson Lake and has taken "two newsworthy sacrifices" when it started, a camper and his dog, but the fire has since spread out "over thirty thousand acres of prime timberland." Consuming everything and everyone crossing its path. As the Jackknife Fire "cut a black swath" through the Caribou Wilderness and Lassen Volcanic National Park, in northern California, small camps ("spikes") were springing up along the fire-line.

Anna Pigeon volunteered as a medical technician, to help staff the medical units, where she spends more than a week bandaging cuts, treating blisters and handing out supplies at one of these tented, village-like spike camps – a "city of a thousand souls" that appeared "suddenly in the wilderness." A cold front moving in over the Cascades coincides with a call to Pigeon's medical unit to rescue Newt Hamlin, a swamper with the Forest Service out of Durango, Colorado, who busted a knee when a log rolled down on him. Unfortunately, as they returned with the wounded swamper, the cold front gave "a spectacular swan song" to the Jackknife as it exploded into a firestorm. This is where the book becomes a truly engrossing and superb disaster/survival thriller! 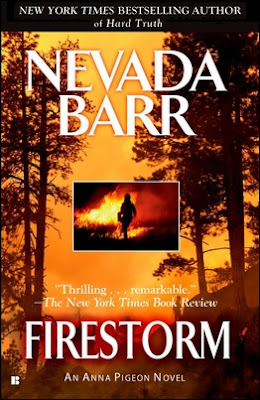 Pigeon's team is confronted with "tornadoes of pure fire shrieking through the treetops" slaking "a hunger so old only stones and gods remembered." Tragically, they have to leave Newt behind on his stretcher to die and run for their lives, until coming across a Safe Zone, where they can huddle down in a small, silver pup tent to protect them from the scorching winds and fire. When the unit reemerge, they face a devastated landscape and a second casualty, Leonard Nims, whose body is found inside his fire shelter with a knife-handle sticking out of his back, but the murderer had to have walked "through fire to accomplish the task."

Something that was, if not outright impossible, unthinkable. A murder in the middle of a firestorm is not even their most dire problem.

The storm front that caused the blowup brought snow and sleep in its wake, which grounded air support and the long, twisted road leading to the remote spike camp had to be cleared. So they're stuck on a snowy ridge in the Cascades with scant, dwindling supplies, untreated burn wounds and batteries running low as they fight against cold, hunger and insanity – while a murderer walks among them. What a phenomenal setup for a detective story!

It's tempting to compare Barr's Firestorm to Ellery Queen's The Siamese Twin Mystery (1933), but the only point of commonality they have is a massive forest fire marooning the characters on a patch of land surrounded by "a sea of black and flame." Firestorm is a full-scale disaster novel with a detective plot and the only thing that comes close enough to it is Izo Hashimoto's manga pulp-series, Fire Investigator Nanase, but written with same verve and strong sense of setting as one of her favorite Golden Age mystery writers, Arthur Upfield. Barr has a similar talent as Upfield when it comes to vivid, lifelike descriptions of scenery, wildlife or simply the weather that reminded me of Upfield's written portraits of sandstorms (Winds of Evil, 1937), droughts (Death of a Lake, 1954) and the desolate Nullarbor Plain (Man of Two Tribes (1956). So, where setting and story-telling is concerned, Barr inherited the mantle of Upfield as the top geographical mystery writer of her time.

I only have Firestorm as an example, but, if its indicative of her other novels, you should only read her for the vivid scenery, action and thrills, because the characterization is dull and intrusive. The plot is ultimately disappointing.

Firestorm is set in the middle of a disaster area, in which the characters have to survive with a murderer among them, but the immersion is broken by the dry patches of characterization and in particular the scenes with Frederick Stanton – "an offbeat FBI agent" and love-interest of Pigeon. Stanton is an outside line of information to the isolated unit, but his musings about his ex-wives, disappointing children, wood carvings and his feelings had no place in this otherwise gripping disaster thriller. Same goes for Pigeon. She was at her best when grappling with their precarious situation or diverting her mind by analyzing the murder. 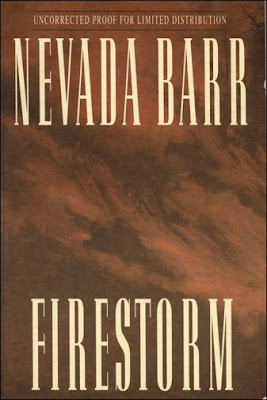 Actually, the best bit of characterization is that of an foolish, unlikable firefighter, Hugh Pepperdine, who somehow managed to "pass his step test to become a red-carded firefighter" and is slowly cracking under the pressure. I suppose this part of the story is one of the reasons why Firestorm has been compared with Agatha Christie's And Then There Were None (1939) and Pigeon even compared him with "one of the wretched little boys in Lord of the Flies." Firestorm needed more of that, but Pigeon had to put him in his place the hard way "to keep him from tearing their fragile society apart." So that's where that story ended.

Unfortunately, the solution to the apparently impossible and fantastical murder in the firestorm failed to deliver on its promise with a simplistic, underwhelming explanation. I can already hear JJ frowning disapprovingly at its status as an impossible crime novel. The weak clueing and the finer details of the motive coming out of nowhere didn't exactly help either, but, what annoyed me the most, is that the story suggested a far more elegant and satisfying solution.

So, purely as a detective story, Firestorm is a good example why I'm always so hesitant with modern crime writers, especially when they have close ties to the character-driven thrillers of today, but, as a disaster/survival thriller and geological crime novel, they probably don't come any better than Firestorm. And the reason why I'm still going to read Blind Descent.
Geplaatst door TomCat on 3/06/2020