Brian Flynn's The Padded Door (1932) is the eleventh title in the Anthony Lotherington Bathurst series and has plot resembling Tread Softly (1937), in layout and structure, but The Padded Door worked its way towards a much more traditional conclusion than Tread Softly – which can be partially seen as a very early precursor of the modern crime novel. Just an example of Flynn's versatile abilities as a writer and plotter that allowed him to effortlessly shift from classic whodunits and impossible crimes to scheming serial killers and pure, undiluted pulp fiction. 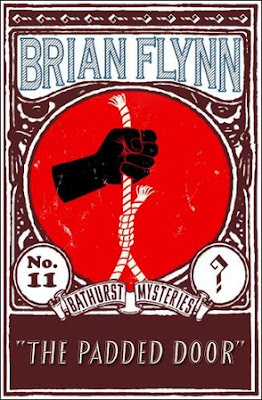 Nevertheless, while The Padded Door is on the surface a typical, plot-oriented 1930s detective novel, it has one of the most audacious solutions of the period that begins with an astonishing surprise at the halfway point. So it's going to be one of those reviews where I dance around the finer plot details.

The first half of The Padded Door centers on the murder of a shady moneylender, Leonard Pearson, whose business practices "sailed exceedingly close to the wind and lay perilously near to blackmail." On the night of his murder, Captain Hilary Frant called on Pearson to fork over a thousand pounds in exchange for letters that belong to his sister, Pamela, which could ruin her engagement to the heir of tobacco empire, Richard Lanchester. Pearson's butler overheard Captain Frant telling his master he would like to cave in his skull and that "the world will be a thundering sight better place to live in," before making his exit through the french windows with the letters in his pocket. But the next day, Pearson is found beaten to death in his study and the money is nowhere to be found.

Detective-Sergeant Waterhouse and Detective Inspector Andrew MacMorran quickly pick up the scent of Pearson's last visitor, Captain Frant, when he finds his name and time of appointment written down in the victim's diary, but things go from bad to worse when he tries "to foist on Scotland Yard a counterfeit alibi" – nor was it very helpful that he lost his heavy, knobbed walking-stick. So he was arrested and charged with murder. Pamela tells their father, Sir Robert Frant, to get Sir Gervaise Acland for the defense and Anthony Bathurst to find the real murderer, but he's abroad on another case. Six weeks elapsed before he could be "called to the scent" and by then, it was "within an ace of being cold." And it was way too late to stop Captain Frant from going to trial.

You can argue that the whole buildup to the trial, culminating with the verdict, is nothing more than one long prologue to the second murder, but the first and second act were so cleverly and daringly tied together that it worked. Second act opened with a smashing surprise with the discovery of a body stuffed inside a large cabin-trunk that was left near a village road. Honestly, I didn't expect [redacted] to bite the dust! This makes everything that preceded it not look as straightforward as it was initially laid out. 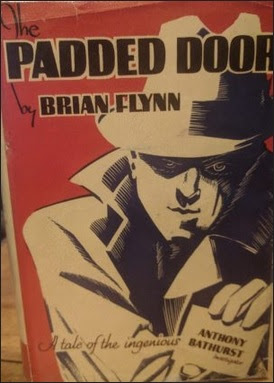 Unfortunately, this makes discussing what happens in the second half very difficult, but let's give it the good old college try.

Bathurst has more to do, as a detective, in the second act and becomes ensnared in a webbing of contradictions, dead ends and a latticework of strange clues such as blue-veined cheese, a magazine interview, uncharacteristically light thuds and a cinema fire that claimed the lives of seventy people – a tragedy that had briefly pushed Pearson's murder from the headlines. But even with all those clues and foreshadowing, I was unprepared for the ballsy solution or how the two murders linked up. Flynn came up with something fresh and original here, but it's the kind of cleverness and originality that cuts on two sides. As ingenious as the solution is, it stretches credulity to its limit and it's the kind of precarious, tight-rope stunt more commonly associated with Flynn's better-known, celebrated contemporaries. John Dickson Carr managed to do it with The Hollow Man (1935) and Agatha Christie did it with The Murder on the Orient Express (1934). Very fittingly, the plot of The Padded Door, like The Murder on the Orient Express and The Hollow Man, hinges largely on the author's specialty. I don't believe he'll ever play that game better than he did here.

A second, incredibly cheeky, move is the truth behind Pearson's murder and how it related to the second killing, but the who is something most of his contemporaries would have probably shied away from. Flynn made it work and, while stretching things considerably, did it seemingly effortlessly. I also begin to believe Flynn loved Conan Doyle and Sherlock Holmes more than oxygen. Flynn was a little more subtle here and the only obvious nod to Holmes was reference to making bricks out of straw, but you can see how big of an influence Doyle had on Flynn in the finer details of the solution.

So, all of that said, not everyone's going to agree with my praise and, by the time this review is posted, surely some reviews of that effect will already have appeared. After all, I was less enthusiastic about Tread Softly than Steve and Kate, but The Padded Door was the antidote I sorely needed after a string of weakly plotted, lightweight and somewhat disappointing detective novels. Sometimes it's just fun to have clues thrown in your face and the wool pulled over your eyes at the same time.
Geplaatst door TomCat on 11/15/2020