A Prize to Pay

"But in the circus you never know what kind of house you're going to have. It's especially difficult with children."
- Dodo the Clown (Alan Melville's Death of Anton, 1936)

The Secret of the Crooked Cat (1970) is the thirteenth case for that troop of meddlesome kids, who are known in the area of Rocky Beach, California, as The Three Investigators, which was penned by an award-winning crime novelist and pen-for-hire, Dennis Lynds – writing here under the name of "William Arden." Lynds was one of the three most frequent contributors to the series and wrote the excellent The Mystery of the Shrinking House (1972). 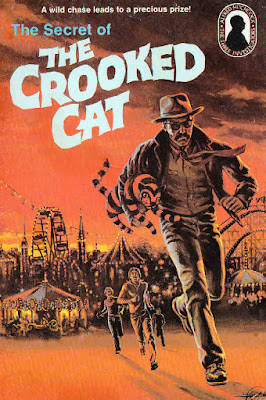 The third book he wrote for the series, The Secret of the Crooked Cat, begins on an afternoon in early September as Uncle Titus, owner of the Jones Salvage Yard, comes to the boys with an unusual chore. He wants a pair of washtubs painted in red, white and blue stripes! It is, quite literally, an odd-job, but they were given to understand that the painted tubs were to be delivered to the star of Carson's Colossal Carnival: The Great Ivan and Rajah – The World's Greatest Performing Lion. Ivan wants to use them as seats for Rajah.

So "the boys went to work with a will" and a short time later they were ready to personally deliver the lion seats to the carnival, which is where they find their next case. One that offers them an impossible problem in the style of Fredric Brown and Clayton Rawson.

Jupe, Pete and Bob took a spin on the Ferris wheel and amused themselves with the antics of a small, fat clown, but, when they headed to the game booths, they witness a man arguing with the boy operating the shooting gallery – yelling "you're a cheat" and "give me that prize." Suddenly, the tall man with the moustache, dark glasses and slouch hat snatched a stuffed animal from the hands of the boy and began to run. He briefly entangled himself with the trio of investigators, but eventually managed to fled and run around a jutting corner of a high wooden fence. As one of the guards observed, "it's a dead end round that corner." The thief seemed to have trapped himself!

However, when they went after him they arrived on a completely empty spot: the high fence was on the right and the deep water of the ocean on the left. There "was no way out except the way they had come in," but the only trace the thief had left behind was the stuffed animal. Later on, they learn this person pulled-off a similar vanishing act when he was chased into "a totally blind alley" by the police. 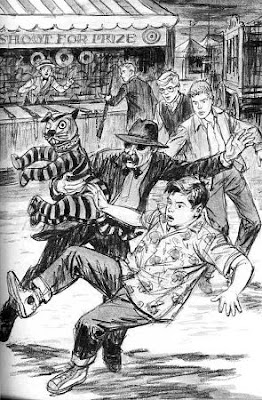 Sadly, the explanation for these two impossible disappearances are exactly what you'd expect from a detective story with a carnival background. It's very carny and hinges on the talent of a particular carnival worker, which makes it a good thing that this aspect of the plot was only minor part in the motor of the plot – which centered on the question of who and why anyone would want to steal a plush toy.

The boy who operates the shooting gallery, Andy Carson, is the son of the carnival's proprietor, Mr. Carson, who kind of tags along with Jupe, Pete and Bob on this case. It's from Andy that they learn he had already handed out several stuffed cats, as the big prize in the gallery, but the one that was snatched from his hands was the last one of the lot. So what was the reason? As they probe deeper, they discover that the carnival has been plagued by very costly accidents: several ponies had died of food poisoning, three tents were burned down and the young investigators themselves were present when the lion escaped from his cage – giving an opportunity to Pete to play the hero and Jupe later determines someone had picked the padlock of the cage.

So they've to conclude they're dealing with a saboteur, as well as a sneak thief, which lures them into several dangerous and life-threatening situations, but the best part of the book is perhaps the backdrop of the story. The carnival background is well conceived and convincingly drawn, which subtly describes a struggling business in a trade that had its golden days behind it and had to grapple with the modern world. Andy tells the boys early on the story that security is a problem, because "people are always trying to steal from carnivals." For this alone, The Secret of the Crooked Cat comes recommended to readers who love mysteries with a carnival or circus background.

Finally, the plot, itself, is rather simplistic, even a bit ridiculous in some aspects, but there's a twist in the tail of the story that's pure Scooby-Doo. There's an unmasking scene at the end of the story and several disguises have to be peeled away to reveal the face of the villain, but the best part is that the bad guy uttered the following sentence, "I'd have got away except for those stupid kids."

So, yes, the book can be a bit silly and there have been better plots in the series, but The Secret if the Crooked Cat is a fun adventure/mystery and one that uses its carnival background to full effect. I would say this was a pretty decent entry in the series.