In the Teeth of the Evidence

"It is really a most extraordinary case."
- Dr. Constantine (Agatha Christie's The Murder on the Orient Express, 1934)

Molly Thynne was born into nobility, a member of the English aristocracy, who was related, on her mother's side, to the painter James McNeil Whistler and as a young, impressionable girl met such literary luminaries as Rudyard Kipling and Henry James – which may have influenced her own literary endeavors later on in life. But, as Sherlock Holmes once famously observed, "art in the blood is liable to take the strangest forms." 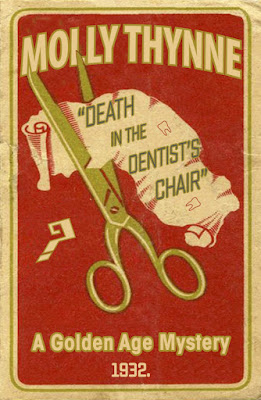 In the case of Thynne, this meant that she turned her back on the lofty heights of literature and descended into the dark bowels of popular-fiction. Over a period of six years, she penned half a dozen detective stories, of which three were standalone novels, but the remainder were part of a short-lived series about Dr. Constantine – a Greek "chess playing amateur detective" who was placed by the critics among "the Frenches and Fortunes" of the genre.

Lamentably, the relentless march of time was not very kind to Thynne and she eventually fell prey to obscurity. Even the fairly comprehensive Golden Age of Detection Wiki, a veritable who's who of who the hell are these folks, does not have single page on Thynne or any of her books. Now that's genuine obscurity! However, Thynne and Dr. Constantine are about to be rescued from the purgatory of biblioblivion.

Dean Street Press is going to reissue all six of her detective stories and our resident genre-historian, Curt Evans, furnished these new editions with an introduction, which touched upon her family background and brief career as a mystery novelist. It adds some interesting background details to these long-forgotten mysteries and the person who wrote them.

So let's take a look at one of them: Death in the Dentist's Chair (1932) is the second book about Dr. Constantine and Detective-Inspector Arkwright, who made their first appearance in The Crime at Noah Ark: A Christmas Mystery (1931) and bowed out in He Dies and Makes No Sign (1933), which also happened to be Thynne's swan song – after which she vanished from the scene. She retired from authorship without a discernable reason. The critics were very positive about her books and she was "independently wealthy," which would have allowed her to continue to dabble in the genre, but, perhaps, she got bored in the end. Anyway...

The opening of Death in the Dentist's Chair takes place in the dental practice of Mr. Humphrey Davenport, society dentist, where several patients are congregating in the waiting room: Mr. Cattistock is taking a breather after having several of his front teeth removed, which he experiences as a terrible blow to his self-confidence. Mrs. Vallon, widow of a theatrical manager, had a bad toothache, but she found that the pain had subsided after a pleasant conversation with Dr. Constantine. Sir Richard Pomfrey was introduced as "a prey of unease" who, sincerely and devoutly, wished the morning was over. Finally, there's Lottie Miller, wife of a London jeweler, but she's described as an unpleasant, garish-looking woman with a bad-tempered mouth.

Mrs. Miller is the first one to be ushered into Davenport's consulting room, but her appointment seems to drag on and on. Dr. Constantine decided to poke around and finds what, initially, appears to be an embarrassment: Davenport left Mrs. Miller behind in the consulting room to adjust her dentures, but, upon his return, he found the door to be locked from the inside. Mrs. Miller seems to be completely unresponsive.

So the dentist's mechanic is summoned from his workshop to remove the screws from the lock on the door and what they find is horrifying: Mrs. Miller is seated in the dentist's chair and underneath her chin was now "a larger and more gaping travesty of the toothless mouth above," which is an ugly, dark gash – in which "the blood that had now ceased to spurt still frothed and bubbled." On the floor, to the left of the chair, was a bloodstained knife. Someone had slipped in, cut her throat and escaped through the open window, which had traces of blood and soot on it. The key to the door was found outside.

I guess this premise proved I suffer from, what Edmund Crispin described as, "locked rooms on the brain," because I was convinced this was an impossible crime in disguise and Davenport was the murderer. After all, why slash someone's throat when she was having a dentist’s appointment? I reasoned this was the only opportunity Davenport had to get to the victim, but this, potentially, also made him a prime-suspect. So he needed to distract the attention away from himself by making it appear someone else entered the room and left through the window. This could simply be accomplished by cutting her throat, opening the window, creating the blood-and soot traces on the window sill and locking the door behind him. He could simply fling the key out of the window of another, nearby room in the building.

However, the whole affair revealed itself to be far more complicated and original than my own locked room fancies!

Dr. Constantine and D.I. Arkwright are immediately confronted with a whole slew of complications: Mr. Cattistock has vanished and Sir Richard briefly left the waiting room at the time of the murder, which looks very suspicious when the police suspects him of having a past with the victim. Mrs. Vallon seems above reproach: no apparent motive and her alibi is Dr. Constantine, but, of course, that means nothing in a detective story. Then there's the widowed husband, Mr. Charles Miller, who has a dark, murky past and did not get on well with his wife, but now he appears to be "badly frightened."

The case truly becomes complicated when the body of a second woman is discovered on a doorstep of Eccleston Square, throat cut with a similar looking knife as was used on Mrs. Miller, which is entangled in a crisscross of international connections. The second victim is found to have Russian antecedents. Both of the murder weapons are of Chinese origin and Cattistock worked in that country as a missionary. Mr. Miller's shady past is rooted in South Africa and they extend all the way to Switzerland and eventually England.

Arkwright finds the whole case "too damned geographical" for his taste, but he forms an engaging duo with Dr. Constantine and they do an excellent job at following all of these globally scattered plot-threads back to the killer. One of Dr. Constantine's approach to uncover information clearly showed the influence Dorothy L. Sayers had on Thynne's detective fiction: Dr. Constantine used his valet, Manners, to do a spot of legwork – which I found to be very reminiscent of Mervyn Bunter's role in the Lord Peter Wimsey mysteries.

However, as was pointed out in this review, the reader was sometimes kept in the dark about the finer details of Dr. Constantine's investigation, but that turned out to be a minor complaint when the explanation was unveiled – an explanation that was build around parts of what was then still fairly recent history. And those parts were used better than I expected. The plot could’ve easily dissolved into a third-rate thriller in the final leg of the book, but Thynne kept the story firmly grounded in the detective story territory and this made the ending all the more effective. So I definitely want to read the other two Dr. Constantine mysteries.

On a final, hastily scribbled note, I’ve to point something out: one of the first things that came to mind when I read about this series was Agatha Christie's The Murder on the Orient Express (1934), because one of the characters is a Greek physician, named Dr. Constantine, which could've been just a coincidence.

However, I've a good reason to believe this may not be the case. Death in the Dentist’s Chair and The Murder on the Orient Express also have an interesting plot-thread in common: they both share an almost identical language-clue, but it gets better. These clues are not only based on the Russian language, but they also concern the except same letter in both novels! It's not exactly a stock-in-trade clue you'll find any other mystery novel from this era. So maybe the inclusion of a Dr. Constantine was a nod and wink at the book that helped Christie plot The Murder on the Orient Express. It’s possible, right?
Geplaatst door TomCat on 8/29/2016