"Suddenly, all around us, there sounded a drip, drip, drip, upon the floor of the great hall. I thrilled with a queer, realizing emotion, and a sense of a very real and present danger—imminent. The 'blood-drip' had commenced. And the grim question was now whether the Barriers could save us from whatever had come into the huge room."
- Thomas Carnacki (William Hope Hodgson's "The House Among the Laurels," from Carnacki, the Ghost-Finder, 1913)

There's a Reason for Everything (1945) is E.R. Punshon's twenty-first book from his voluminous series about policeman Bobby Owen, now Deputy Chief Constable of Wychshire, which has one of the authors patent carpets of densely knotted plot-threads, but the emerging patterns usually form a logical, well-defined image. This one is no exception in that regard!

Bobby Owen has risen through the ranks of the Wychshire police department and has now become the Deputy Chief Constable, but he felt "both a trifle unemployed and a trifle grand" in his new office. The daily grind of the police apparatus were now taken care of by the men below him, like his assistance Inspector Payne, which is "a loss he was inclined occasionally to regret." Opportunely, the new Deputy Chief Constable receives an unusual invitation that places him on the spot of a fresh crime-scene. 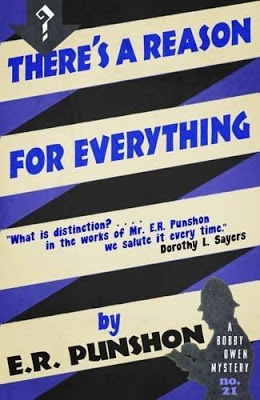 Dr. Clem Jones, of Wessex and Mercia University, secured permission to investigate "the rumors or renewed hauntings" at Nonpareil, the ancient seat of the Tallebois family, where blood once flowed like beer at an Irish pub – which packed the house to the rafters with ghosts. There were some pretty famous ghost stories associated with Nonpareil.

During the English Civil War, a Cavalier's family sought refuge from a troop of marauding Roundheads in its great cellars, but they were locked in and died of starvation. On the anniversary of this tragedy, their disembodied "groans and lamentations" can be heard coming from the basements. Another story involves twin brothers, rivals in love, who fought a duel to the death in one of the rooms, but the ghost they left behind is that of their grief-stricken mother – who was often seen hastily walking through the corridors in search of her sons. A third story is closely intertwined with the second one: a bloodstain is often seen in the room where the twins perished, usually after their mother is seen walking the hallways, which then gradually begins to fade away. According to the legend, the "appearance of the bloodstain is a sign of an approaching death."

Dr. Jones and one of his colleagues, Mr. Parkinson, reported to have found a fresh bloodstain in the room where, reputedly, the tragic duel took place. Naturally, bloodstains are of professional interest to Owen. So he decided to poke around the place, but what he found there had very little to do with ghost stories.

Nonpareil is a dark, abandoned and largely empty house. Only a row of statues in the picture gallery are a reminder of its glory days, but a stone bust, "of a Roman emperor apparently," was toppled over the balustrade of the inner hall – nearly crushing Owen, Payne and Parkinson. And that’s just for starters! The second problem concerns the ghostly bloodstain: Dr. Jones and Mr. Parkinson drew a chalk outline round the stain and sealed the room, which was done by placing "threads in position across the crack of the door" and "a small paper wad fixed between the doorpost and the door." So that if would fall if the door were opened. Parkinson claims these "most effective precautions" makes it impossible for anyone to have been there during absence, but the only traces they find on the bare, wooden floorboards is a chalk outline. The bloodstain has completely vanished!

I first assumed the bloodstain-angle was some kind of chemical trick, which made it fade from a sealed room, but the actual explanation, given one or two chapters later, hinges on a common gambit of the locked room mystery. However, this very explanation betrays a very shaky claim to the status of a locked room, but, considering the premise and explanation, I still decided to tag this blog-post as an impossible crime – which I also had to do with Punshon's Crossword Mystery (1934).

Finally, there's a third complication that'll provide a great deal of trouble for Bobby Owen: between the space of a statue of a prostrate stag and a posturing goddess are the strangled remains of the paranormal investigator, Dr. Clem Jones. 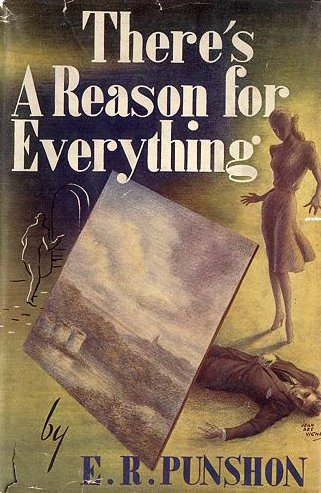 The introduction, written by genre-historian Curt Evans, notes how "haunted houses figured in Golden Age detective fiction with some frequency," which include such notable examples like John Dickson Carr's Hag's Nook (1933), Carter Dickson's The Plague Court Murders (1934), Gladys Mitchell's When Last I Died (1941) and John Rhode's Men Die at Cyprus Lodge (1943). It's a rich enough background to draw on for a good, old-fashioned detective story, but Punshon never seemed to be satisfied unless he was clutching a whole jumble of apparently confusing plot-threads.

This is what makes his books seem so complex. But, by the end, they usually reveal themselves to have a logical and comprehensible plot-structure, which is perhaps Punshon's greatest accomplishments as a mystery novelist: being able to manipulate a multitude of plot-strands without getting entangled in them. So let's have a quick look at the plot threads.

One of those plot-threads triggered Owen's interest in the bloodstain at Nonpareil. Owen had read in one of Inspector Payne's daily reports how Constable Reed and Major Hardman, who lived at The Tulips, had heard a gunshot coming from the direction of Wychwood forest – which is not unusual for the countryside. But it had been late in the evening and Major Hardman was worried about his young, troublesome nephew, Francis "Frank" Hardman. He had been discharged from the army as medically unfit, but had already caused trouble in the village, which did not sit very well with both his uncle and twin sister, Frances. Major Hardman had given his nephew a five-pound note and told him to get a decent job if he wanted another penny, but, since then, he seems to have vanished from the face of the earth. How does the gunshot and disappearance of Frank Hardman ties in with an attempted burglary at the village of Major Hardman?

A different plot-thread involves a young woman, Miss Betty Anson, who works in Wychwood and takes a footpath through the forest when going homeward, which means she might have heard the shot. She has hurt her foot and a footprint, corresponding with her size shoes, was found near a spend cartridge and something seems to be weighing on her mind. But the question is whether or not any of this is related to the murder at Nonpareil or tied to the unidentified corpse that was found in Midwych Canal with two bullet holes in his back.

However, the most important of all the plot-threads from this novel concerns "a first-class, long-lost Vermeer," which, as a Dutchman, I always find an interesting angle for a detective story (e.g. Herbert Resnicow's The Gold Frame, 1986). I should also point out that Evans' introduction makes a connection between this plot-thread and a famous, real-life forgery case from my country, which could have inspired Punshon. However, this book has very little to do with forgers.

Apparently, the lost masterpiece is "a view of Rotterdam in sun and rain" and Vermeer described it in a letter as one of his best works, but parted with the panel when an English lord made a generous offer, forty guineas in gold, which he was unable to refuse – after which the painting vanished from the history books. But now there are several people hunting for the painting. A Mr. Marmaduke Clavering, "an Honourable," who entered the story as an art expert who assessed the value of those "deplorable specimens of sculpture" in the picture gallery of Nonpareil, but it becomes apparent that what he's really after is the lost Vermeer. And he has a rival: a junior partner of a Mayfair Square picture dealer, Mr. Tails, who's "not too particular in his business methods."

As you can probably deduce, There's a Reason for Everything is made up of an intricate, multifarious and complex web of plot-threads, but Punshon laces all of these plot-threads up tightly. There are also a fair amount of clues and hints dropped along the corridors and rooms of this maze-like plot, which should point out the truth to the observant reader. It also provided another demonstration of Punshon ability to navigate the reader through a labyrinthine plot. I also like how he handled the abundance of twins appearing in this story and how he sidestepped the clichéd fate that usually befalls long-lost paintings and manuscripts in detective stories.

So, all in all, I found There's a Reason for Everything to be a rewarding read and even slightly better than Punshon's much touted masterpiece, Diabolic Candelabra (1942), which really was more along the lines of a Mitchellian crime fantasy than that of a traditional whodunit. And I begin to believe that I'm becoming a fan of Punshon.

Well, I guess that's a good a place to end this drawn-out review and let's see what I'll fish up for my blog-post.
Geplaatst door TomCat on 8/05/2016