"One of the most extraordinary cases Ellery has ever investigated. The newspaper called it "The Case of the Wounded Tyrolean;" more specific identification may not be given here. It is one of the few problems, to my knowledge, which stalemated Ellery; and it is still an unsolved crime."
- J. McC. (Ellery Queen's The Spanish Cape Mystery, 1935)

Last month, I wrote a blog-post, headed "The Locked Room Reader IV: The Lazy Anthologist," that used a line from an essay by Donald A. Yates, titled "The Locked Room: An Ancient Device of the Story-Teller, But Not Dead Yet," which attracted the attention of our resident archivist, Mike Gray – who can be found blogging at Ontos. This resulted in a compilation post with links to the essay, articles, blog-posts, a short video-clip and a short story by Yates. 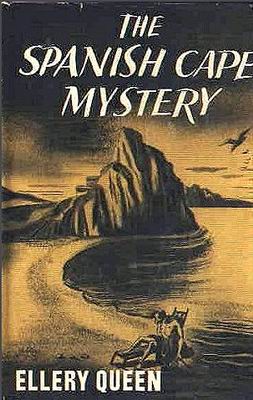 Yates' short story, "The Wounded Tyrolean," began as a Watsonian reference in Ellery Queen's The Spanish Cape Mystery (1935), which was meant as a nod and a wink at the unrecorded cases noted by Dr. Watson in the official Sherlock Holmes canon. As Ellery Queen observed, Dr. Watson's allusions have "sent Sherlockians screaming into the night hunting for the reference source and finding only a ghostly chuckle," but the consequence of these tantalizing allusions is that people began to write their own Sherlock Holmes stories – which has grown into a sub-genre of its own. The mountain of Holmesian pastiches, parodies and semi-official sequels dwarfs the number of original stories by Sir Arthur Conan Doyle.

So it was only to be expected that Ellery Queen's oblique reference to "The Case of the Wounded Tyrolean" would result in at least one write-up.

According to this blog-post, Yates wrote "The Wounded Tyrolean" during the early fifties and at the time he was "trying repeatedly to write a story" that "he [Fred Dannay] would accept for EQMM." One of the editors, Mildred Falk, suggested writing a story that could carry the title "The Wounded Tyrolean" and "be so perplexing that even Ellery himself had not been able to solve it." Yates picked up the gauntlet and decided to turn his hand to the classic locked room mystery, determined "to come up with a new solution that had never been devised before," but the fruit of his labor was rejected by Ellery Queen's Mystery Magazine and only a Spanish translation of the story made into print – appearing in the Argentine magazine Leoplán in July of 1955. Fifty-seven years after being published in Argentina, the story appeared in English in the Fall 2012 issue of the Michigan Quarterly Review, published in Ann Arbor, the "very setting where the action of the baffling locked-room murder had been situated." So, let's take a look at the story.

The Austrian-born Professor Behring of the Middleton University physics department is "The Wounded Tyrolean," whose "characteristic limp was the consequence of a leg wound he had suffered in the First World War," but the "indelible figure" of the old professor was cruelly snatched away from the campus-town – stabbed to death in his study. There was a sense of the unreal clinging to the circumstances of the crime, because, from all perceivable angles, it seems like an impossible murder.

Professor Behring had scheduled an appointment with Dr. Gaines and Wenley, the College President, but nobody appeared to be home and when they entered the premise found that only the study door was locked. Dr. Gained and Wenley forced open the door and discovered the body of the professor in the middle of the room, "the handle of a kitchen knife protruding from his back," but they found nobody else inside the windowless room, which had walls lined with bookshelves. The only door was locked from the inside and the modest furnishings, a desk and some chairs, offered no hiding place for the killer.

The rundown of these facts showed a missed opportunity for a false solution and one that would have been as classic as the locked room problem itself, which would have been very similar to such short stories as Agatha Christie's "The Idol House of Astarte" (The Thirteen Problems, 1932) and Peter Godfrey's "The Flung-Back Lit" (The Newtonian Egg, 2002). Essentially, it would have been a play on the "replacement of space-and time" illusion and this trick would have fitted the given facts, but Yates deserves some points for trying to come up with an explanation that was a little bit different.

A bright senior and editor of the student newspaper, John Rossiter, eventually stumbled to the truth "through a feat of inspired logic," but "never revealed the solution to a soul." I think the best part of the plot is explaining how someone like Ellery Queen could have failed to reach the correct answer. I can easily imagine Queen would've read about the case and came to the campus-town to investigate it himself, but by that time, Rossiter had already swept the whole affair under the rug and the tell-tale clues expunged – which makes it very difficult for even the best logicians to reach a sensible and rational conclusion.

With that being said, the locked room facet of the plot under-performed to the who-and why, which were far better imagined and linked than how the trick was pulled off. The locked room was pretty incidental to the whole thing. Not to mention borderline insane and extremely risky. If it weren't for the high concentration of spoilers, I would probably slap together a re-imagining of this plot, because I see an alternative explanation for the locked room that would've served the purpose of the guilty party a whole lot better.

Regardless, "The Wounded Tyrolean" is a good and laudable attempt at an original locked room story by a then still young and ardent mystery enthusiast, which, arguably, required some polishing. But you can read and judge the story for yourself by clicking here.
Geplaatst door TomCat on 8/10/2016