"The more we dig in the surer we get. The picture, atmosphere, are the same. A killer who came and went and didn't even leave a shadow on a windowshade."
- Inspector Richard Queen (Ellery Queen's Cat of Many Tails, 1949)

Arthur W. Upfield's Winds of Evil (1937) is the fifth book about one of the genre's most unusual policeman, Detective-Inspector Napoleon "Bony" Bonaparte of the Queensland Police, which tells an equally curious tale about "a mad strangler who strikes only in dust storms" and was deservedly praised by Anthony Boucher – extolling the clear-cut plot and "a new quality of horror" permeating the story. It definitely deserves the attention of genre historians and mystery scholars as an early incarnation of the modern serial killer novel. 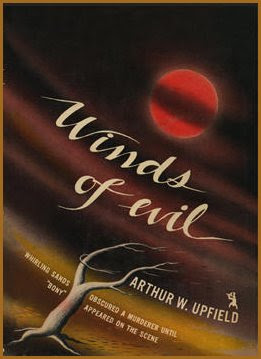 The initial setup of the plot tailgates one of the series familiar patterns: in a far-flung corner or settlement of the Australian continent a murder is committed or a person vanished under mysterious circumstances, but the local police failed to find an explanation and the trail grew cold. So the authorities usually assign these cold, dead-end cases to Detective-Inspector Napoleon Bonaparte. Bony is of mixed blood, a "half-caste," whose aborigine heritage endowed him with the tracking skills of his maternal ancestors, which he used to rise through the ranks of the police force and carving out a name for himself as a relentless man-hunter in Western attire.

His talent for tracking in the wild and uncanny ability to draw conclusions from observation about his immediate surrounding, plants, trees and animals has a prominent role in Winds of Evil – which adds an additional layer of interest to the plot. But more on that later.

The setting of the book is a small, wind-swept township in the dusty outback of New South Wales, called Carie, which is ruled over by the owner and licensee of the only hotel in town, Mrs. Nelson. She clinched her rule over the town by holding the mortgages on most of the property there, but it was a quiet, peaceful settlement. That is, until the murders started happening.

Two years prior to the story's opening, the body of a young, half-aborigine girl, Alice Tindell, was found on the bank of a watering hole: she had been strangled! A police sergeant from Broken Hill came down to investigate the case, but failed to uncover as much as a shadow of a motive for the murder. The story was repeated a year later when a recently arrived laborer, Frank Marsh, was found near a fence gate with strangulation marks on his throat. Only two facts could be asserted with certainty: they were both strangled to death and their killer struck when "the wind sang its menacing song" – assuring "the strangling brute" that the storm of dust and sand would wipe all of his tracks out of existence. So the case requires the attention of an expert tracker and Bony is dispatched to this "wind-created hell."

Bony takes on the identity of a fence-rider, named "Joe Fisher," who finds an ally in the local police officer, Mounted-Constable Lee, but also a common enemy in the Sergeant Simone from Broken Hill – whose uncouth personality and bully-boy tactics were completely useless in this bush case. 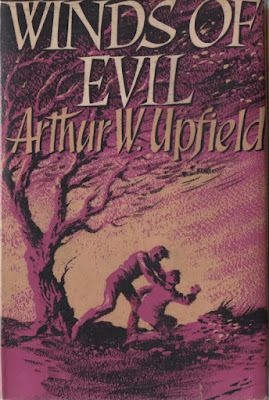 As Lee observed, "you can't get anything out of bush people by bullying them." Bony further notes that "the detection of criminals in a city is much easier than the detection of the rarer criminal in the bush," because the city criminal "operated against a static background," such as a house or a street, but the background of this case is "composed of ceaselessly moving sand" and "exposed to the constant action of sun and wind."

Bony gives an interesting demonstration on how the interpret the many hints left behind in open wild of the Australian outback, which consist of a series of observation about twisted tree branches, green tree bark and wisps of brittle grass that was left behind in abandoned nesting holes – all of them lineup to form a route along the creeks. These places are described with Upfield's accustomed vividness and given such unusual names as Nogga Creek, Catfish Hole and Wirragata Station. While roaming around these places, Bony meets an array of equally colorful and unusually named characters such as Hang-dog Jack, Bill the Cobbler and Dogger Smith.

This makes Winds of Evil as rich in character, setting and atmosphere as all of his other Australian-set mystery novels, but, what really deserves praise, is how the extremely simplistic plot was handled.

Despite the appearance of both murders and several attempted murders, the killer does not use the sand storms as a cover for his crimes, but is "periodically governed by his lust to kill" and this urge to kill seems to coincide with "the rising wind." So it is very obvious Bony is tangling with a mentally disturbed individual and this leaves no room for the clever serial-killer devices of the Golden Age. However, Upfield expertly avoided bitter disappointment with a clever bit of misdirection. Oh, the false solution that sprang from this was bitterly disappointing and was afraid I had to write another lukewarm review, but the twist, revealing the actual murderer, made more than up for this and the misdirection also made a part of the murderer's action easier to swallow – which drew on Robert Louis Stevenson's Strange Case of Dr. Jekyll and Mr. Hyde (1886) and Edgar Rice Burroughs' Tarzan of the Apes (1912). But more acceptable and down to earth.

I would not place Winds of Evil among the very best of Upfield's work, which includes Venom House (1952) and Cake in the Hat Box (1954), but it's a very solid and remarkable entry in the series. And one that precedes the modern serial killer novel by several decades. So it's a very interesting read all around.
Geplaatst door TomCat on 8/19/2016