"The world is filled with mysteries... many very intelligent people work solving them. My skill lies in making that talent pay."
- Penelope Peters (Lois H. Gresh and Robert Weinberg's "Death Rides the Elevator," from The Mammoth Book of Locked Room Mysteries and Impossible Crimes, 2000)

Erle Stanley Gardner was an incredible productive novelist, who had his roots in the pulps, but garnered everlasting fame in the genre as the author of more than eighty mysteries about a lawyer and courtroom wizard, named Perry Mason – which have the tendency to overshadow all of his other work.

Gardner also wrote a few short-lived series about such characters as Gramps Wiggins (e.g. The Case of the Smoking Chimney, 1941), Terry Clane (e.g. The Case of the Backward Mule, 1946) and Sheriff Bill Eldon (e.g. Two Clues, 1947). However, they only lasted for a couple of novels or a handful of novellas. The life-span of Doug Selby, the D.A. of fictitious town, stretched across nine novels, but, volume-wise, only one of Gardner's secondary series came (somewhat) close to matching the sheer prolificacy of the Perry Mason mysteries. 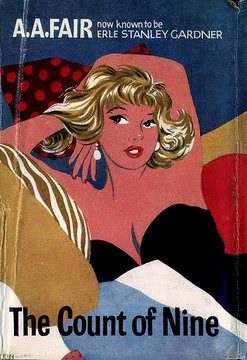 Bertha Cool and Donald Lam are at the front of twenty-nine novels, initially published under the name of "A.A. Fair," who were defined by the Thrilling Detective website as "one of the all-time great mismatched team ups in detective fiction" and "a real blast of fresh air." During the introduction of Cool and Lam (1958), an unsold pilot for CBS, Gardner described Lam as "a little thinking machine" and Cool as his "big, penny-pinching partner," which is all very appetizing, but I found myself in a quandary – where to begin? I was torn between The Bigger They Come (1939), Top of the Heap (1952) and The Count of Nine (1958), but settled, predictably, on the last one. Why is it predictable, you ask? Why, it's an impossible crime story! What else did you expect from me?

A globetrotter and gentleman-explorer, Dean Crockett, engaged Cool and Lam to keep out sticky-fingered gatecrashers from his upcoming social gathering. Or to prevent any potential intruders from leaving the place with a valuable item from his exhibition room. The last time he threw a party someone lifted "a jade statue worth six thousand bucks," but this time Crockett turned his penthouse into a mousetrap: the place is at the twentieth floor and can only be reached by a special elevator, which runs up to a vestibule-like room "that opened out from the twentieth floor hallway." You need to be let in or have a key to get inside the penthouse, but that’s not the only precaution that was taken.

Cool stationed herself by the door, in charge of checking invitations of the guests, while the elevator has been secretly out fitted with an x-ray machine. This turned the elevator in a primitive body scanner. Regardless of these obstacles, a second jade statue and a five feet long blow-pipe from Borneo were taken from the tightly watched and secured penthouse. It seems like a complete impossibility!

I've to make an annotation here that, at this point in the book, the story really began to show how wrong my assumptions about the characters were. I assumed Cool and Lam were, partially, inspired or based on Rex Stout's Nero Wolfe and Archie Goodwin, but it was Lam who most of the brain-and leg work – basically all of it after the theft was discovered. After Cool bungled the job, she receded into the background and occasionally hurled abuse at poor Lam ("I'll take a swing at you right here in front of all these people"). But it was her partner, not her, who figured out how a long, cumbersome blow-pipe and a jade statue were carried, unnoticed, out of a guarded apartment.

The explanation for the theft of the blow-pipe was logical, fairly well clued and not too difficult to solve yourself, but I can't say the same for how the carved jade Buddha was smuggled out of the apartment – which was revealed without giving any real clues. You could probably make a good guess how the statue was lifted, but it would be a pretty long shot. So I would say The Count of Nine is decent, but not stellar, as a locked room novel, but the seemingly impossible theft of a blow-pipe and a hunk of jade are not the only crimes confronting Cool and Lam. There's also a murder a little later on in the novel.

Dean Crockett’s lifeless body is found inside his so-called hibernation room, where he retreated to write travel articles and books, with "a dart from a blowgun embedded in his chest a short distance below the throat." The dart was fired into the room through the open window and the shot likely originated from the studio of his wife, Phyllis, who was painting a portrait of a nude model, Sylvia Hadley. She has a link to Crockett's personal photographer, Lionel Palmer, who has an interesting collection of photographs and gives Lam some pickup tricks. Finally, there is Crockett's public relations man, Melvin Otis Olney, and a receiver of stolen good hovering in the background.

All of these potential suspects dance around the body of the dead explorer, but the who and why of the murder were uninspired, bland and run-of-the-mill. Only the how-part of the explanation lifted this part of the plot slightly above the ordinary. Gardner toyed with ideas from G.K. Chesterton's "The Arrow of Heaven," collected in The Incredulity of Father Brown (1926), and Agatha Christie's Death in the Clouds (1935), but the clueing is a bit iffy – as the only proper hint was an observation that a second dart was "shot with sufficient force so that the point was deeply embedded in the wood" of a closet.

So I found The Count of Nine to be a very uneven mystery novel: there were definitely aspects of the story I liked, but there were also a lot of aspects that left me completely underwhelmed and unimpressed. Honestly, I expected a bit more from the author of Perry Mason, because those books had a fairly high and consistent quality of plots. But maybe I should try some of the earlier ones.

Well, that's all I have to say about The Count of Nine as a detective story, but there's one thing I need to point out to everyone. The book mentions vending machines at airports for insurance policies, which actually existed. I found the following link that briefly goes over the history of these vending machines and mentions how several airplanes were blown up with these insurance policies as a motive. One of these cases is the infamous 1955 bombing case of United States Flight 629, which resulted in 44 fatalities.

Finally, I have some good news that connects this review with a recent blog-post, "The Locked Room Reader V: A Selection of Lost Detective Stories," in which I went over a number of lost and unpublished manuscripts. Today, I learned Gardner's publisher shelves the second book in this series, The Knife Slipped, because they objected to Cool's tendency to "talk tough, swear, smoke cigarettes and try to gyp people," which happened to be exactly the kind of gal Hard Case Crime likes – who'll be publishing the book for the first time in December of this year. You can read more about the book here.

So that's one detective story we can scratch from that lamentable list of lost detective stories!
Geplaatst door TomCat on 8/07/2016