"We meet people on the worst day of their lives."
- Gil Grissom (CSI)

M.P.O. Books' Cruise Control (2014) is the eighth in a series of police procedurals, blending the characterization of the contemporary crime-and thriller novels with the plot-awareness of a classic whodunit, which began with the publication of Bij verstek veroordeeld (Sentenced in Absentia, 2004). And that was than a decade ago. 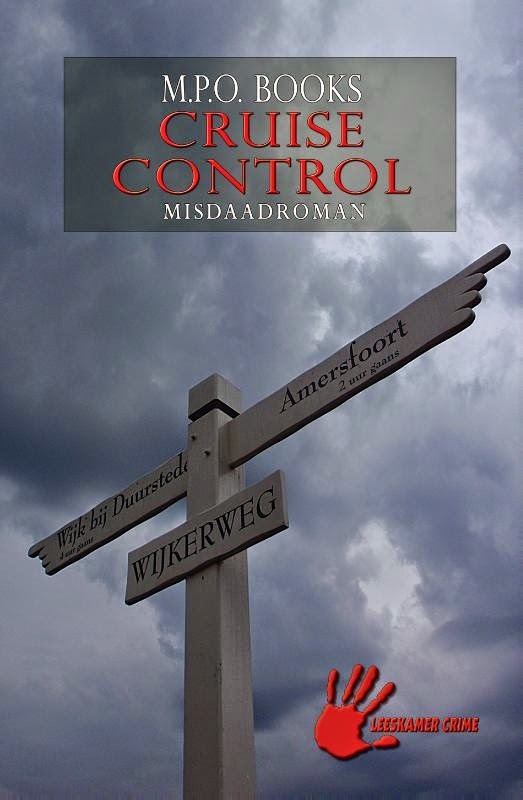 District Heuvelrug series has evolved quite a lot over that time period. The first couple of books had Bram Petersen, a veteran police inspector, and his younger assistant, Ronald Bloem, as the main protagonists, but Bloem transferred to another district in De laatse kans (The Last Chance, 2011) due to personal issues and Petersen resided into the background after his wife suffered a stroke in De dood van Callista de Vries (The Death of Callista de Vries, 2012) – giving room for other characters to shine and develop.

There was a hiatus of four years between the publications of Gedragen haat (Hatred Borne, 2006) and De blikvanger (The Eye-Catcher, 2010), during which Books was shopping around for a new publisher and (obviously) improving his craft. The plots from 2010 onwards are delightfully complex, interlaced with clues, and graciously unraveled by a team of professional police men-and women in the spirit of Ed McBain 87th Precinct series. The Eye-Catcher and Een afgesloten huis (A Sealed House, 2013) were sporting impossible crimes, but The Last Chance, even without a locked room mystery, remains a personal favorite – which says something about the quality of the story and plot!

Cruise Control can be characterized as a third shift in direction for the series and this might explain one of two things: the length of the story, almost twice as long as normal, and why the opening chapters felt as an introduction to a completely new series.

Gisella Markus is introduced to the reader as a police woman in her early forties, who found herself, surprisingly, ascending to the rank of Chief-Inspector, with an invalid, embittered and nagging husband at home – who insists on being a drag on her life. Niels Hanse is the one who usually assists Markus on cases and a column of support for her to lean against, but their present assignment impacts Hanse, who's gay, personally.

The body of a half naked man was found in the vicinity of a recreational area, De Treekerpunt, known as a rendezvous spot for cruising gays and was shot, execution style, between the eyes. Hanse is sure the shooting was the work of someone with a grudge against homosexuals, but Markus thinks the murderer could very well have been one of the cruising men. After all, Felix van Leeuwen dealt in narcotics and had caused trouble before. Van Leeuwen's behavior gave even the forest ranger a motive and this provided the first leads for the assembled task force to sift through, which includes Inge Veenstra from District Heuvelrug and her former colleage, Ronald Bloem.

A vile-worded bloedtekst (blood text), written in chicken blood, fuels Hanse's theory, but colliding opinion and personal circumstances continue to bug the investigation. Than, exactly six weeks later, the shooter strikes again and, before long, another blood text is found: "IK PROBEER EEN PROBLEEM OP TE LOSSEN” (“I'M TRYING TO SOLVE A PROBLEM"). The team recognizes this as a possible indicator that they might be dealing with a serial killer, who's warming up, and they receive more manpower. Actually, A Sealed House ended with John van Keeken, who replaced Bloem, hearing the news of the second murder and was to go there to strengthen the team.

Eventually, they even drag Bram Petersen from special leave to give his opinion on the case, but mounting media attention and internal division plague the investigation relentlessly. There's an anonymous "whistleblower" that accuses the conservative-minded, but always respectable, Petersen of homophobia, while the murderer delivers a personal blow to the investigators in the next hail of bullets. As well as blowing my already fragmented theories to a thousand tiny little pieces.

I found it interesting how Books rendered an otherwise well-oiled and experienced team of professional police investigators useless by pouring gallons of raw emotions into the machine, which made me overlook a majority of the clues and the identity of the well-hidden murderer caught me by surprise. I openly admit that. But I loved how Petersen functioned from the sideline, as an old-fashioned armchair detective, connecting the dots based on footprints, gun knowledge and Jack the Ripper-lore to reveal the killer.

However, the ending clearly shows Books has one foot as firmly planted in the modern school of crime fiction as in the one honoring the traditional art of murder, because, character-wise, his novels have the penchant to end on a dark note. I even felt sympathy for Bloem and I was glad when Van Keeken took his place, but now I would welcome him back into the fold out of sheer pity. Poor guy.

Nevertheless, I'm quite proud of our homegrown, neo-orthodox crime/mystery author and his methods has its desired effect: I'm very curious about the aftermath of Cruise Control, but I have a suspicion the answer won't be given in the next book. I suspect that the following book will be about the, briefly mentioned, investigation of the kidnapped-and murdered shop owner in Utrecht that Bloem was a part of and probably involved Inspector Arthur van der Camp – which would explain Bloem's behavior in this story. Well, hopefully, the shop owner was conscientious enough to have allowed himself to be snuffed out under impossible circumstances inside a sealed or guarded room.

To summarize: Cruise Control is a high strung, character-driven police thriller with detective interruptions and the story is packaged in a deluxe paperback edition with diagrams of the crime scenes. What's there not to like, if you enjoy crime fiction in general?
Geplaatst door TomCat on 12/20/2014