The Penny Murders (1979) by Lionel Black

Dudley Barker was a British journalist and literary agent, who turned to fiction, becoming a full-time writer in the 1960s and wrote seventeen crime, detective and spy novels over the next twenty years – all published as by "Lionel Black." One of his books is listed in Robert Adey's Locked Room Murders (1991), but, believe it or not, the impossible crime element is not what attracted my attention. Not entirely, anyway. 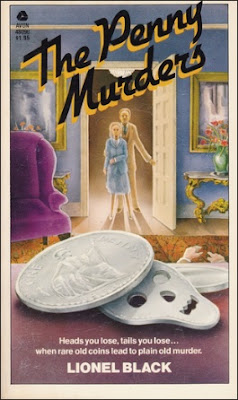 The Penny Murders (1979) is the fifth of seven novels in the Kate and Henry Theobold series, a modern interpretation of the husband-and-wife detective teams of Frances Crane, Kelley Roos and the Lockridges, which takes place in the world of rare coin collectors. Everything I read about The Penny Murders suggested it was an English precursor to the very distinctive locked room mysteries penned by Herbert Resnicow in the 1980s. And my impression was pretty much on the money!

Kate Theobold is a nosy reporter for a London newspaper, the Daily Post, while her husband is barrister and a humble collector with a "coin cabinet he coos over." So when a coin collection comes up for auction, one of the biggest in over fifty years, Kate decides to cover it for her newspaper and takes along her husband to watch how a tray of old coins is sold for "twelve thousand smackers" – followed by a bidding war over a Charles I Oxford crown. Henry identifies the bidders as Cornelius Ball, one of the best-known coin collectors in United States, who is going at it with a with a well-known London dealer, Harvey Foskett. Henry suspects Foskett bidding on behalf of Ball's long-time rival, Miles Cabral. A millionaire who made his pile during the newspaper takeover games of the '60s and survived the crash in the '70s.

Cabral is reputed to have one of the finest collection of coins in England and particular a so-called 'small change' collection ("Athenian fractions of the obol, the first English pennies, rare United States dimes, that sort of thing"). And they have been at each other hammer-and-tong for years.

So, when Kate learns Henry's father is an old acquaintance of Cabral, she asks Henry to introduce her to him and they get invited to his house for drinks at six o'clock, but they arrive at a silent and locked house! Kate decides to enter the home through the unlocked garage door, assuming Cabral has fallen ill, but, when she goes into the coin-room, she finds his body sprawled on the floor – a gunshot wound to head and a gun lying nearby. The house has "one of the most elaborate and effective burglar alarms in London," which got triggered when Kate opened the garage door, immediately summoning the police when the alarm goes off.

Cabral died in "the best-locked house in London," locked electronically with the keys in the corpse's pocket, which can only mean he died by his own hands. Nobody else could have entered, or left, the premises without setting off the alarm system. However, Kate is convinced he had been murdered and launches a journalistic investigation with Henry helping out in the background. 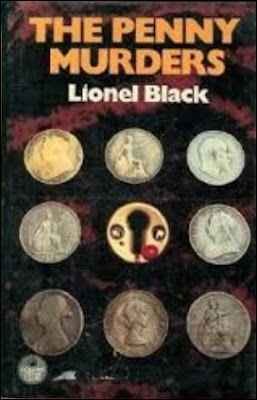 The main focus of the investigation is the coin collection and Henry, who examined the collection, noticed Cabral had left open "a few very optimistic spaces" in his cabinets that even he can never seriously have expected to fill. A spot had been reserved for an Edward VIII twelve-sided three penny piece and two placed for the 1933 and 1954 English pennies. The 1954 penny is the rarest coin of them all and the possible existence of a second specimen is a central plot-thread of the story.

Black's The Penny Murders is not solely concerned with the tug-of-war between two collectors with deep pockets, but there are also the various plots, and counter plots, between the characters and victim – such as the battle with his ex-wive and her soon-to-be husband. They both have enough pull, or incriminating material, at their disposal to destroy each other. And there are some other possibilities to consider. Who's threatening Kate to stop writing articles on Cabral and why? Does it have any connection with the Lebanese silversmith who's always lurking in the background? And did Cabral help himself to some rare coins from the collection of his former mistress's dead uncle? And does it give the girl, or her boyfriend, a motive for murder?

Whoever pulled the trigger, the problem that has to be solved before the murderer can be apprehended is figuring out how this person entered, and left, the house that was equipped with a sensitive, high-tech burglar alarm. This is where the story becomes a little frustrating and difficult to explain.

You see, Black found a way to break an unwritten, but cast-iron, rule of the locked room mystery, a really big no-no, without actually breaking it. Something you'll probably never stumble to. Just to give you an idea, imagine a locked room with the murderer exiting through a secret passage, but the passage was created by the murderer when he was locked inside with the victim – somehow finding a way to cover the passageway behind him. This is the kind of locked room-trick Black cooked up here, but slightly more ingenious and frustrating. A solution that left me torn whether to applaud the infernal cheek of it or toss the book across the room in disgust.

Anyway, the solution to the locked house did give the story a much needed punch in the end, because the who-and why were either a letdown (who) or obvious (why), but the how certainly made it memorable. It successfully pulled the wool over my eyes. I had reasons to believe that the solution to the electronically locked house was a modern redressing of an age-old trick, which is why I suspected a completely innocent person. And than the explanation revealed something else all together. Sometimes, I'm just a really shitty armchair detective.

All in all, Black's The Penny Murders is an enjoyable mystery novel with an interesting background milieu of numismatics and coin lore, but the overall solution isn't perfect or particularly exciting. So I can only really recommend it to fanatical locked room readers on account of the bold solution, because it would probably generate some discussion among fans.
Geplaatst door TomCat on 6/03/2020