Last year, I read Unholy Dying (1945) by Ruthven Todd, published as by "R.T. Campbell," who penned a flurry of lighthearted, satirical detective novels published during a two year period, 1945 and 1946, which feature a loud, portly and beer guzzling botanist-cum-detective, Professor John Stubbs – a literary relative of Sgt. Beef, Dr. Gideon Fell and Simon Gale. So a perfect series to read if you're in the mood for something bright and cheerful. I was definitely in the mood for a comedic mystery with a boorish, elephant-in-a-china-shop detective trampling through the case. 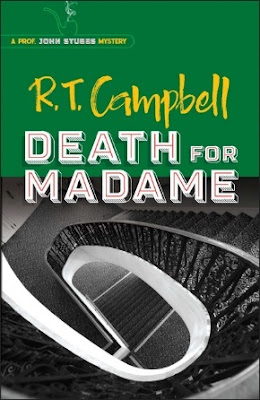 John Norris, of Pretty Sinister Books, nominated Campbell's Death for Madame (1946) as the "Best Vintage Mystery Reprint of 2018," released by Dover, but decided at the time to go with Unholy Dying instead. I now have to agree with John that Death for Madame is probably the best and funniest of these recent Dover reprints.

Death for Madame stands closer to the humorous, tongue-in-cheek mysteries of Leo Bruce than Unholy Dying, or Bodies in a Bookshop (1946), with the narrator, Max Boyle, playing the Lionel Townsend to Professor Stubbs' Sgt. Beef. A well done contrast between the quiet introvert and the overly social extrovert.

Max Boyle was looking forward to a quiet, peaceful life with "nothing moving any faster than a seed germinates" when he became the assistant of Professor Stubbs, but living with Professor Stubbs had been "one damned murder after another" – even in between murders he had no peace. Professor Stubbs is a large, mustachioed man, both in stature and personality, who smokes pipes filled with wickedly-smelling tobacco or black cigars that could fumigate "a ward of patients suffering from bubonic plague" and has all the tact of an air-raid siren. So what should have been a quiet, scholarly life went from "one crack-brained scheme" to another, interspersed by a murder or two, which prevented them from doing any serious work on The History of Botany.

A situation trying enough for the long-suffering Boyle, but a personal friend of Professor Stubbs, a Mr. Ben Carr, has an equally disruptive personality and is "in and out of the house at all hours of the day and night." Usually, Carr strings them along to replicate experiments he read about in eighteenth century books.

One day, out of nowhere, Carr asks Stubbs if he knows his aunt, Lottie Rattigan. A "most extraordinary old cuss" who used to keep a brothel in Brussels, but she found "the wear and tear too great" and now she runs a seedy residential hotel, The Boudoir, in Bayswater – as "hotels go it's pretty mad, too." And wonders if he liked to meet her. Naturally, Professor Stubbs is only too willing to go out and meet this eccentric relative of his friend, but this would come back to haunt him. Lottie Rattigan can meet the boorish, wheezing and overweight botanic detective pound for pound.

Lottie is an enormous woman, in her late nineties, who rarely leaves her rocking chair in the hallway of the hotel and runs the place from that chair in a way that would drive any sane bookkeeper to either mental breakdown or over a window ledge, whichever is more convenient at the time. She actually remembers Professor Stubbs' father, "dressed in lavender silk combinations," who used to dance the can-can in her rooms in Brussels. This embarrassed Stubbs and pleased Boyle to no end.

On the following day, Stubbs is called by Carr with the news that Lottie had been killed during the night. She was found lolling in her rocking chair with a piece of electric flex tied around around her neck. The problem this murder poses has a deceptively simplistic appearance.

Firstly, there are only a handful of suspects. Carr is the principle legatee under his aunt's latest will and becomes the police's primary suspect, which infuriates Stubbs to no end. Roland Grimble is Lottie's second nephew and a good-for-nothing young man who becomes furious when he discovers his generous inheritance comes with strings attached. James and Sybil Baker used to visit country house parties, like Raffles and Bunny, but nowadays run a discreet gambling den. Lottie approved of gambling and rewarded them accordingly in her will. Miss Annie Aspinall was a long-time companion of Lottie and she left Annie the tidy sum of five thousand pounds. There's an aged, world-weary waiter, Arthur Niven, and a chambermaid, Janet Morgan, who both received a generous sum of money.

So everyone appears to have a money-backed motive and not an alibi between them worth, or desired, mentioning, but the motive is not as strong as it appeared on account of Lottie's habit of adding, or cutting, people out of her will on a weekly basis – nobody knew for sure whether, or not, they were in the will. This made Lottie more valuable alive than dead. Everyone appears to have had the opportunity to kill Lottie without having an alibi, but banking on an inheritance would have been a pure gamble. That makes it a slightly different kind of detective story. A detective story with a solution that took me by surprise, because I was suspecting something completely different.

Stubbs has a bookcases crammed with thrillers, muscling in on the shelf space of the Botanical Magazine, who reads "the latest detective story by John Dickson Carr" during his investigation and remarks that "the worst kinda thriller" has the killer enter the story at the very end, while in "the best thrillers the murderer is there all the time" – one of the minor side-characters happens to be an outsider on the inside. Mr. Hillary St. John Smellman is Lottie's lawyer and before reading her will, he noted that looking after her affairs was "no sinecure." Regularly, Smellman had to come down to the hotel to make (minor) alterations to the will and was there only a day before the murder to perform his usual duties. I took these bits and pieces as clues and hints that Lottie had finally driven Smellman to temporary insanity and had he killed her to put a stop to the song and dance with the will. It would have fitted the tone and circumstances of the story, but Campbell decided to end the story on more serious and tragic note. But it made for a strangely effective ending.

All in all, Campbell's Death for Madame is one of the funnier takes on the so-called hotel-mysteries with a good plot and great characters that will charm and entertain readers who count Leo Bruce, John Dickson Carr and Edmund Crispin among their favorite detective novelist. Very much worth your time.
Geplaatst door TomCat on 6/25/2020