Francis van Wyck Mason was an American historian, importer, writer and, while barely sixteen years old, traveled to Europe in 1917 to fight in the First World War and enlisted in the French army where he became "a decorated artillery officer." By the end of the war, Van Wyck Mason was only seventeen and had achieved the rank of Lieutenant in the United States Army. Van Wyck Mason re-enlisted in the U.S. army after the attack on Pearl Harbor, effectively putting his writing career on hold, where he worked as Chief Historian on General Eisenhower's staff and was tasked with documenting the war for future generations – during which he achieved the rank of Colonel. Someone should seriously consider writing a historical perspective on the war-time service of mystery writers during the First and Second World Wars. 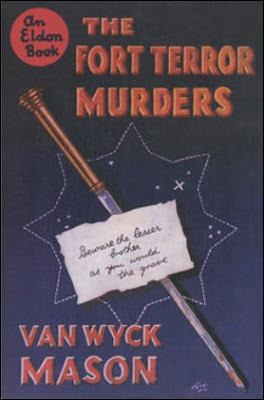 In the interbellum, Van Wyck Mason attended university, started an importing business, traveled the globe in pursuit of antiques and began to write stories for the pulps.

Van Wyck Mason sold his first eighteen stories without rejection and soon published a novel, Seeds of Murder (1930), which introduced his series-character, Captain Hugh North, who's in the employ of the Army Intelligence Service and appeared in nearly thirty novels – bowing out more than three decades later in The Deadly Orbit Mission (1968). Yes, as you can probably gauge from that book-title, the Captain North series are mostly intrigue novels tinged with spy material and seemed outside of my field of interest. However, just like with my previous read, I was beckoned to this series by an alluringly titled novel.

The Fort Terror Murders (1931) is the third entry in the Captain Hugh North series and the plot-description suggested a story in the spirit of one of Carter Dickson's spy-tinged impossible crime novels (e.g. The Unicorn Murders, 1935), but turned out to be a Golden Age mystery harking back to the days of Edgar Allan Poe and Sir Arthur Conan Doyle.

Interestingly, The Fort Terror Murders is one of those rare, novel-length detective stories that has a coded cipher as the centerpiece of the plot. Not the murders. Not the inexplicable disappearances. A coded cipher is the master key that unlocks and solves the mysteries of "that infernal old fort." Usually, you only see that in short stories or juvenile mysteries.

Captain Hugh North is on Luzon Island, in the Philippines, where he's a guest of the polo team of Fort Espanto and learns over dinner the back-story of "the famous ghosts of Fort Espanto."

Fort Espanto is an octagonal star fort and was erected in 1660 as a Jesuit monastery, which gathered wealth beyond belief, but in 1767, they were ordered out with very little ceremony and the monastery was converted into a military fort – ever since "old Fort Terror" could have served as "the subject of a horror story." The fleeing padres left behind a well-hidden treasure and the key to finding its hiding place was locked away in a coded cipher. A cipher consisting of two, ebony-beaded rosaries threaded on an extremely long, fine gold chains and "a wrinkled little piece of sheepskin-parchment" bearing only two words, "Pater Noster." And this story has attracted several unlucky treasure hunters to the fort.

In 1801, Captain Julio de Ribera, a Spanish officer, claimed to have deciphered the code and knew where to look for the Jesuit treasure, but vanished during the night from the fort. There were sentries on the walls and at the gate, its only entrance and exit, but Capt. De Ribera was nowhere to be found. During the war, in 1916, two men came all the way from Spain to study the enigma of Fort Espanto and they were stabbed to death in the great central gallery of the fort.

During dinner, it becomes apparent that Lieutenant Dale Bowen has an interest in the back-story of the fort and has been looking into its history with Ricardo Mendez. The cousin of Captain Barrett's fiance, Inez Sarolla. Mendez excitedly interrupts the dinner and excitedly announces to everyone that he has found the treasure, "millions in gold, in silver, and in gems," which annoys Lt. Bowen extremely – who makes a futile attempt to silence him. So the cat is out of the bag and the dinner party is determined to take a look at the treasure that evening.

Their exciting evening of hunting for a fabled, long-lost treasure in an abandoned, crumbling and ghost-infested fort comes to an abrupt end when Mendez is fatally knifed and Lt. Bowen vanishes as impossibly as Capt. De Ribera a century before. Capt. North takes immediate charge of the case and places a cordon of soldiers around the fort. Once more, the dark, grim fort is search top to bottom, but not a trace of Lt. Bowen is found. On the following day, soldiers who guarded the fort during the night reported hearing ghostly moans and groans. And to make this enigmatic conundrum complete, they find a piece of paper on Mendez with "beware the lesser brother as you would the grave" written on it.

Firstly, the impossible disappearances are, as you probably deduced by the plot-description, explained away with a slight variation on one of the oldest (locked room) tricks in the book. However, Van Wyck Mason deserves to be praised for the way in which he refurbished and presented this age-old plot-device. Something to be expected from an importer of antiques, I suppose. Anyway, it was acceptable enough within the confines of this story and Van Wyck Mason wisely made the impossible disappearances a secondary plot-thread, which was not made too much of a mystery about. The solution was hinted at early on in the story. So, yeah, I can live with this aspect of the plot. 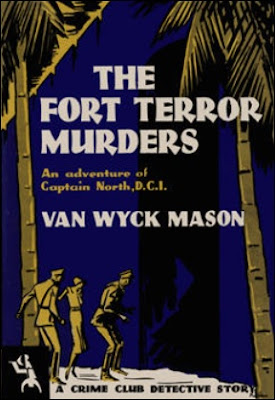 But, as said before, the centerpiece of the plot is the coded cipher and Capt. North even briefly launched into a lecture on codes, ciphers and code-breaking.

Unfortunately, this lasted for less than a full page. A missed opportunity. I think a well-written, chapter-length lecture on ciphers and code-breaking would have greatly enhanced the reputation of The Fort Terror Murders, because the plot already makes it tempting to draw a comparison to Carter Dickson's earlier Sir Henry Merrivale novels – throw in a code-cracking lecture and you have an often cited mystery novel. The code itself is pretty ingenious and only marred by the fact that the intricate puzzle can only really be deciphered within the story. This is only, somewhat, made up by a clever little twist that the unlucky treasure hunters had not calculated on. So this only leaves Capt. North with having to find the murderer, but was not overly impressed with that end of the plot. Nothing really special or memorable.

The Fort Terror Murders is a code-cracker with impossible disappearances in a decaying, star-shaped fort with a haunted history as a secondary plot-thread, but Van Wyck Mason wrote an engaging, colorful story around this premise and has two very memorable, thrill-filled set pieces – in which he was definitely showing off his pulp-roots. One of these scenes, has Capt. North fighting a gravely agitated, venomous cobra with a polo mallet and it was awesome. The second scene has Capt. North observing a hallway through a keyhole, trying to find out who's leaving their room after the lights go out, while an armed shadow creeps around the window behind him.

Van Wyck Mason knew how to pen a good, old-fashioned yarn and, in spite of some problems with the plot, enjoyed my time with The Fort Terror Murders. I would like to try another Capt. North novel, but the previously mentioned Seeds of Murder appears to be the only other traditionally-structured detective story in the series. So, any and all, recommendations are more than welcome.
Geplaatst door TomCat on 6/27/2018