The Strange Case of Harriet Hall (1936) by Moray Dalton

Katherine M. Renoir is the author of twenty-nine detective novels, published as by "Moray Dalton," which Curt Evans described as "finely polished examples of criminally scintillating Golden Age art," but she has long since slipped into obscurity and her legacy has become a "tantalizingly elusive treasure" to mystery readers – like "the fabled Lost Dutchman's mine." Well, I have some good news. 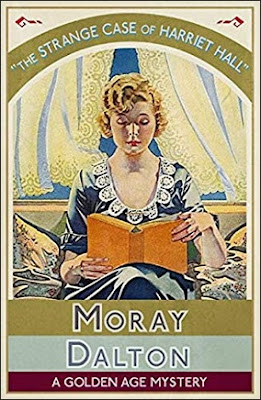 On March 4th, Dean Street Press is going to republish five of Dalton's best detective novels from her early period. These titles are One by One They Disappeared (1929), The Body on the Road (1931), The Night of Fear (1931), Death in the Cup (1932) and The Strange Case of Harriet Hall (1936). Rupert Heath was, as always, kind enough to provide me with a copy of the book Evans called "one of the finest detective novels" from the genre's Golden Age.

The Strange Case of Harriet Hall begins like a domestic suspense story, not entirely dissimilar to Anthony Gilbert, but, after the opening chapters, the plot begins to fall in line with the more literary, character-based mysteries by other obscure, long-forgotten female writers – such as Dorothy Bowers and Maureen Sarsfield. But with a strong hint of Gladys Mitchell.

Amy Steer is a nineteen-year-old woman, without immediate relatives, hopelessly looking for work, but nobody had any use for her. So her situation was becoming an impossible one. Until she noticed an advertisement in the personal column of a newspaper, asking any "relative of the late Julius Horace Steer" to come forward, because they "may hear something to their advantage."

Julius Horace Steer is Amy's late father and the person who placed the advertisement turns out to be her aunt, Harriet Hall.

Amy meets her Aunt Harriet for the first time in the waiting room of a train station and her "blatant personality" makes a "rather alarming" impression on Amy in spite of her friendly generosity. Harriet gives a dazed Amy a hundred pounds to splurge on a new wardrobe and expect her at her cottage, in West Sussex, on the following Monday, but, when Amy arrives at the cottage, Harriet is nowhere to be found. Curiously, the brick floor in one of the corners looked quite wet, "as if it had been recently washed," while the oil container of the stove was still warm. Someone had been in the cottage shortly before she arrived. But who? And where's her aunt?

Over the next couple of chapters, the reader learns that the remote cottage belongs to an old friend of Amy's aunt, Mrs. Mary Dene, who inherited an immense fortune from her brother-in-law and bought the Dower House, at Lennor Park, where she settled down with her three children – Tony, Mollie and Lavvy. Mary Dene had purchased the house to give her favorite child, Lavvy, a proper background. She succeeded in getting her engaged to marry a local nobility, Sir Miles Lennor. Something that has never sat very well with his regal mother, Lady Louisa Lennor.

However, the constant presence of the vulgar Harriet Hall at Dower House, who helped herself to everything in the home, which was resented by family and friends alike. Harriet was spoiling life for everyone around her and appeared to have some kind of hold over Mary. Amy learns first-hand how unpopular Harriet is when she had a nice conversation with Tony on the train, but he bolted as soon as she mentioned that Harriet Hall is her aunt. So there you have a nice premise for a good, old-fashioned murder and the police gets involved when Harriet's remains are found in a disused well, but a bombshell revelation at the inquest draws Dalton's series-detective, Inspector Hugh Collier of Scotland Yard, into the case. 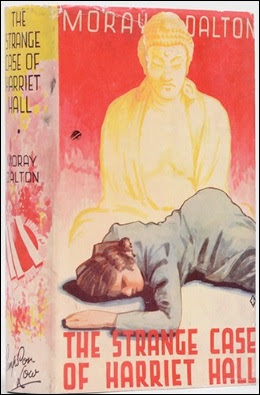 I mentioned that Curt Evans, who wrote an introduction and afterword for the DSP edition of The Strange Case of Harriet Hall, praised the book as one of the finest detective novels the genre had produced and, when I read this, I was reminded of the praise heaped on Bowers' Fear and Miss Betony (1941) by Rue Morgue Press – claiming the book had "one of the most original and ingenious plots" in the history of the genre. Funnily enough, I turned out to have exactly the same reaction to both stories: goddammit, I love Agatha Christie. Yes, this is hardly a fair comparison, but Harriet Hall and Miss Betony aren't anywhere near the top of the heap of great detective novels.

Sure, this book has an unforgettable character in Harriet Hall, whose backstory will fascinate many readers today, which also made effective use of the epilogue by showing justice is not always found in a courtroom or at the end of a rope, but the ending is reached by delving into the past of characters. The most important revelations are given to the reader, towards the end, and combined with the lack of any physical clues the story felt rather thin as a mystery.

All of that being said, the peculiar characteristics of The Strange Case of Harriet Hall unquestionably makes it standout in the crowd of 1930s mysteries, however, readers should approach the book as a precursor of the modern crime novel of P.D. James instead of the Golden Age mysteries of Dorothy L. Sayers. So, while the plot didn't quite measure up to my expectations, I still found it to be an interesting read and will return to Dalton when DSP publishes the rest. One by One They Disappeared and The Night of Fear look promising. Hopefully, DSP decides to reprint The Black Death (1934) in the future, because I would very much like to read a detective novel that "merges the murder mystery with post-apocalyptic science fiction."

On a final note, DSP is reprinting more long-forgotten mystery writers in March, such as Joan A. Cowdroy, but the writers who currently have my full attention are a husband-and-wife writing tandem, E. and M.A. Radford, who have dabbled in impossible crime fiction – producing two novels and a collection of short impossible crime stories (Death and the Professor, 1961). Unfortunately, the short story collection has been out-of-print for a long time, but the two novels, Murder Isn't Cricket (1946) and Who Killed Dick Whittington (1947), will be reprinted by DSP in March. My original plan was to review one of them for this blog-post, but Curt's introduction and praise for Dalton lured me away from the Radfords. So I'll get around to them later next month.
Geplaatst door TomCat on 2/17/2019