Before the unrelenting deluge of reprints and translations of classical, conventionally-structured detective novels and short stories, I took regular trips down the trail of obscurity. During these excursions, I unearthed such little-known, but surprisingly good, titles as Lynton Blow's The Moth Murders (1931), Joseph B. Carr's The Man With Bated Breath (1934) and Franklyn Pell's Hangman's Hill (1946).

So I wanted to return to these earlier days and present you with a truly obscure, long-forgotten mystery novel by a writer who's not even mentioned on the Golden Age of Detection Wiki – a veritable who's who of who the hell are these guys. Oh, boy, did I exhumed one that fits the bill to a tee. 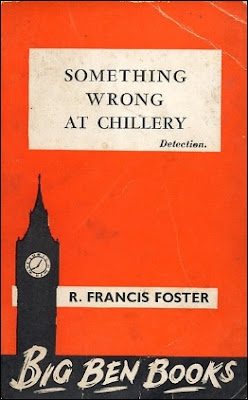 R. Francis Foster was a journalist and an author of books on the countryside, how-to-write manuals and penned a number of detective novels, short stories and serializations. His serialized novels and short stories appeared in such publications as The Strand Magazine, Detective Fiction Weekly and Hutchinson's Mystery Story Magazine. Predictably, I would probably have remained unaware of Foster had it not been for the late Robert Adey's Locked Room Murders (1991), which listed one of his mystery novels.

Something Wrong at Chillery (1931) constitutes the last recorded case of Foster's series-detective, Anthony Ravenhill, who's the "notorious crime reporter" of The Planet and has been published, during the 1930s, under two alternative titles – namely The Mystery at Chillery and The Chillery Court Mystery. Somehow, in spite of these alternative book-titles, my brain assumed the titular chillery referred to the cold storage of a distillery. No idea why. But you're allowed to point and laugh at me.

The story begins with a restless Captain Trevor Hawkesbridge, late of his Majesty's Indian Army, who's time Indian has sharpened his "sense of danger." Captain Hawkesbridge has come to the conclusion that "anyone with half an eye can see there's something wrong" at Chillery Court.

Chillery Court is the home of Hawkesbridge's old Commanding Officer in India, Colonel Merrow, who invited Hawkesbridge to come and stay with his family, but he has the distinct impression he had been summoned to help them on a very delicate matter. Hawkesbridge overheard a conversation in which Mrs. Merrow told her husband to "trust him" and "tell him the first thing in the morning." However, this is not the only reason for Hawkesbridge's apprehension. The daughter of Colonel Merrow, Osyth, had slipped out of the house and left a trail of footprints on the glistening, moonlit lawn. And, from his bedroom window, Hawkesbridge noticed "a second trail" across the lawn. Someone had been following Osyth!

On the following morning, Hawkesbridge discovers a third trail with "the toemarks towards the house." There were two people about the previous night, but "only one returned." Hawkesbridge traced the trail of footprints to a hut and evidence suggests Osyth has stayed there for several hours, but refuses to believe she had a secret assignation with the unknown man. The problem takes a sinister turn when he return to Chillery Court.

The North Sussex Argus has a "STOP PRESS" that "the body of a well-dressed young woman was found in a third-class compartment of the 10.35 train from Horsham to Brighton at Shoreham" and the unidentified victim had been strangled – which mortified Osyth when she read it. Hawkesbridge is convinced that the murder on the night-train is connected with the affairs at Chillery Court. And this murder brings Anthony Ravenhill to Chillery Village, because "a train murder's always good copy." 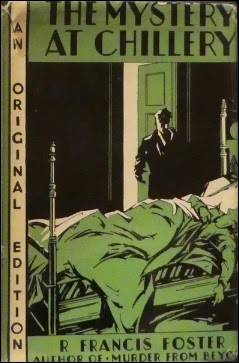 In my opinion, the encounter and mental sparring match between Hawkesbridge and Ravenhill, as they compare their deductions on the footprints, is easily the best part of the book. This alone makes the book worth a read to everyone who dislike Hercule Poirot's dimwitted sidekick, Captain Arthur Hastings. Hawkesbridge is not a slow-witted dunce and can be pretty sharp, but he's bound by old-school conventions, breeding and loyalty to the Colonel. This is why he clashed with Ravenhill when they met.

After a while, the story becomes complicated because the people involved either refuse to tell the whole story or are physically unable to do so. Somewhat of a problem when you're working with only a handful of characters. They're either murdered, attacked, physically collapse or lose their memory. A very convenient plot-device and you can put that down to the story being a tribute-act to the 1920s-style detective novels, which is most notable in the Indian material of the plot – such as Thuggi, dark yogi and the goddess of death, Kali. Nonetheless, there are some interesting bits and pieces of detection here. For example, this is only Golden Age mystery novel that actually uses "death spots" on the body to prove that the second victim had been murdered somewhere else. And later moved to the hut.

Where the book becomes truly noteworthy, as a second-tier mystery novel, is the locked room murder, which is committed in one of the final chapters of the book. The house is tightly locked up with all of the windows securely shuttered and the doors locked and bolted. A precaution against the murderer. However, an unexpected and surprising victim is found murdered inside a locked bedroom and the solution is mindbogglingly simple, but where it draws it strength is that the explanation is also the final sentence of the book! A gimmick that Christianna Brand would use sixteen years later in one of her own impossible crime novels (Suddenly at His Residence, 1947).

Only thing robbing this otherwise original ending of its surprise is that the murderer's identity had been obvious for a while. You can chalk that down to a lack of suspects.

Something Wrong at Chillery is not a bad detective story at all, for a second-tier mystery, which even had some good and original ideas, but Foster missed the master's touch to make it fully work and he struck me as a poor man's Francis Vivian (i.e. a small cast of characters). On the upside, Adey considered this to be only "an average Foster novel." So, hopefully, this means The Lift Murder (1925), The Music Gallery Murder (1927) and Murder from Beyond (1931) are detective novels worth the trouble of tracking down.
Geplaatst door TomCat on 2/07/2019