Ada E. Lingo was a journalist, writer and physician who penned her first of only two detective novels, Murder in Texas (1935), while she was the Society Editor of the Daily Herald and completed a second manuscript, entitled Murder by Minims, reflecting her medical training at the time – only the book was never published and "the fate of the manuscript is unknown." Fortunately, Lingo's first mystery novel has been reissued by Coachwhip and their reprint edition is introduced by resident genre-historian, Curt Evans. 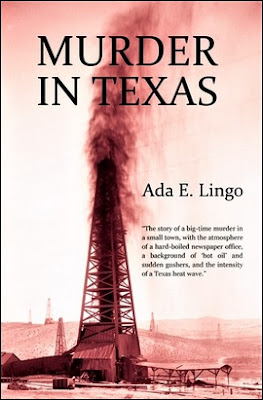 First of all, I have to mention that my reading of Murder in Texas has been fragmented with many stops and goes. Even putting it down to read The Legendary Vampire Murders. However, this was mostly due to circumstances than with the quality of the story, but it has made it more difficult to properly review. So this probably going to be a short review. The reader has been warned!

The protagonist of Murder in Texas is a young journalist, Joan Shields, who's the Society Editor of the Fordman Daily News and the story begins with Shields doing a write-up of Mrs. Shaw's Laff-a-Lot Bridge Club party, while the paper was held up as it awaited confirmation on the story of a strike – when a bombshell hit the office. John Fordman had been shot and killed!

John Fordman was an oil millionaire, rancher and a newspaper owner and the small, West Texan town of Fordman was named in his honor. Fordman was bringing in a new gusher to the town, but, during the shooting of this oil well, he was shot and killed inside his luxury limousine. There's a good map depicting the crime-scene with the gusher, Fordman's limousine and the positions of various cars. I don't believe you need the map to solve the murder, but maps, floor plans and diagrams are practically a lost art of the detective story. As Ho-Ling Wong said on the subject in a 2018 blog-post, "The Quest of the Missing Map," there's something romantic and exciting about these old maps and diagrams. This map was no exception.

Daily News is one of the newspaper Fordman owned and Shields decided to play detective, which is more exciting than slaving away on society columns, but she has two men at her side who nearly earned this review the "juvenile mystery" label.

Shields had known a private-detective, Dick Field, when she briefly worked in New York as "a refined sob-sister and feature writer" and summoned him to Fordman to help her capture the murderer. Fields is a detective of the modern age and has "a small leather-covered box" with a microscope, a fingerprint kit, a Bunsen burner, test tubes and a dozen of carefully labeled phials – which he affectionately calls his "traveling lab." And he gets to play CSI, when the murderer strikes a second time. Another shooting clumsily disguised as a suicide and the gun was found in basin filled with hot soapy water, but Fields manages to pull prints from it. Interestingly, one of the characters refers to Fields as "the boy detective from St. Louise."

Secondly, there's Shields' high-school aged kid brother, Jimmie, who tags along with his sister and stole the show in the final chapters. This is, together with the newspaper background and regional, small town flavor of the story, why Murder in Texas reminded me of the more mature juvenile mysteries by Bruce Campbell (The Clue of the Phantom Car, 1953) and Norvin Pallas (The Locked Safe Mystery, 1954). Why I nearly labeled this review as a juvenile mystery. 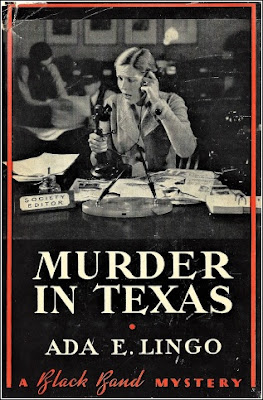 As an aside, Murder in Texas has one of those bookshelf scenes, in which the detective browses through the bookcase of a suspect and notices a host of mystery novels. Usually, these are shout-outs to their own favorite mystery writers or show an allegiance to a certain type of crime fiction. Lingo had some very interesting and unusual choices: Shields saw the "latest thriller" of Kay Cleaver Strahan (probably The Hobgoblin Murder, 1934), Mignon G. Eberhart's The White Cockatoo (1933), Francis Iles' Before the Fact (1932) and Leslie Ford's "delightful" Murder in Maryland (1932). She felt cheated that she could not take with her Mary Roberts Rinehart's The Album (1933), because she had been unable "to keep up with it in the Saturday Evening Post." These bookshelf scenes, like maps and diagrams, is another one of those small treats you find, from time to time, in these classic mysteries.

Unfortunately, the rest of the story struck me as fairly bland with a by-the-numbers plot, in which Shields and Field talk with people and test alibis, but nothing really inspired.

However, the ending was very well and even daringly handled! The murderer eludes capture and hightails it out of town, but not before taking along two hostages and one of them is Jimmie! The entire manhunt is played out in a series of police and news bulletins send over the teleprint, which are read by Shields and Field. So the whole climax to the story took place off-page, but it worked for, what I assume, exactly the same reason as why everyone in America was watching the O.J. Simpson car chase in 1994 – once the news broke, you simple had to keep watching to see it unfold. And to use this aspect of the modern news cycle, in 1935, is almost visionary. This is all I have to say about the plot.

Murder in Texas has a good, regional setting and lively (main) characters, but Lingo was not as adept when it came to the plot. My impression is that it was a pretty standard, humdrum plot without much to make it standout, but this could be my fractured reading of the book speaking. Yes, the absolute state of this review. It's completely useless. Good news is that I have dug up something for my post that looks promising, but not nearly as obscure as most of the detective novels reviewed this month. So stay tuned!
Geplaatst door TomCat on 2/22/2019