The Wastelands of Heaven

"Flying may not be all plain sailing, but the fun of it is worth the price."
- Emelia Earhart

After my previous post embroiled deliberately on the recurrent image of railway mysteries, I intended to follow the theme. A plan as simple as it's perfect, if it were not for the fact that you can't always shape an accidental pattern further and that are perhaps too many words to say I forgot to check if there were any unread, train-bound detective stories on the big pile – which was not the case and didn't feel like re-reading any of the classic examples. The substitute book I picked was meant as a compromise, but the story turned out the be a pleasant surprise! 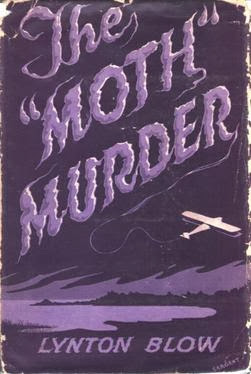 The "Moth" Murder (1931) is the first of two mystery novels by Lynton Blow, one more name for the list of writers who are conspicuous by their absence on the GADWiki, and the sole case for Inspector Hunt, from Criminal Investigation Department of New Scotland Yard, burdened with finding Sir Charles Stafford's killer – an aviation hero of the modern era.

One year before, Stafford had made a daring double crossing of the Atlantic in a light aero-plane, which raised Britain's prestige in a time when air supremacy was seen as the key to victory in future conflicts, but a coastguard in Bournemouth Bay is the lonely witness of Stafford's burning machine crashing down from the sky. Immediately, Hunt is confronted with the first of many problems: there's only one body retrieved from the burned out wreckage of the plane. Stafford's body is badly burned, but there weren't any remains found of his female passenger, Mrs. Evans. Even more puzzling is that Mrs. Evans husband, Dennis, who was flying solo, also appears to have dropped off the map – alongside with his airplane. However, the proverbial bombshell goes off during the inquest when the police surgeon reveals Stafford was shot in the back of the head before he crashed!

Meanwhile, down on the ground, Hunt is summoned to a ditch in Redstock Lane where a local cowman found the body of Constable James, also shot through the head, which is one of many complications resulting in some genuine (and fun) detective-and think work. The bits of theorizing, especially the part on what must've happened in the air, were engrossing on account of the multitude of methods you could use a two-seater, light airplane in a murder or body dump and I know of one mystery writer who reworked one of these rejected premises in a full-length detective novel – of course, I'm not going to spoil anything. Blow jam-packed the plot with twists and turns, seemingly complicating the case with every step Hunt takes forward, with Stafford's heir disappearing from the scene almost as fast as he appeared, a suitcase full of money, a dead tramp (Curt is OK) and a gang of dope peddlers hanging around in the background. Not to mention unsnarling a knot of footprints and tire tracks. There are even allusions to the problem of a single set of footprints and the disappearance of a car from a locked garage, but they didn't materialize into actual impossible crimes of the Carrian kind (ah boo!).

The "Moth" Murder weaves a fine, complex mesh from multiple plot threads and Blow understands these kind of plots work best when they play out according to Murphy's Law, instead of allowing the murderer smooth sailing on the winds of good luck like a demigod, but what holds the book back is that there's a very dated trick at the heart of the plot. This makes the solution as plain as day to any seasoned mystery reader. And that's somewhat funny, because it's a trick I used to fall for all the time. Once, I fell for it twice, back-to-back, while reading the same author! That's how easily fooled I was and every time I was just as surprised as the time before that I had fallen for it. Who knew mystery writers could lie through the teeth by stating factual truths.

Finally, there's a shimmer of continuation on the railway theme as one of the characters crashes with a car into a London-bound express train, but hardly enough to tag it as such. Still nice to see it popping-up though!

Steve from the MysteryFile website/blog has more on Lynton Blow's second novel, The Bournewick Murders (1935), and link to read The "Moth" Murder yourselves, if this review has piqued your interest.
Geplaatst door TomCat on 12/15/2013