"Scene of the crime—well, what's wrong with the good old library? Nothing like it for atmosphere. As for the weapon—well, it might be a curiously twisted dagger—or some blunt instrument—a carved stone idol..."
- Captain Arthur Hastings (Agatha Christie's The ABC Murders, 1936)

Last month, I reviewed The Scarlet Macaw (1923) by Gladys E. Locke and the absence of as much as a profile page from the hive mind of the modern mystery reader, Golden Age of Detection Wiki, attests that your name on a book cover isn't always an inked guarantee of its immortality. 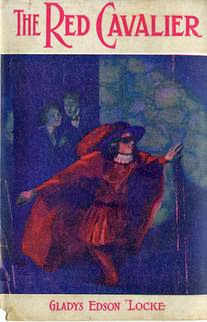 Locke's second, exasperatingly titled mystery, The Red Cavalier, Or, the Twin Turrets Mystery (1922), was reported as one of the better mysteries of the year, but, what struck the critics' fancy at the time, it sure as hell wasn't innovation. If you could spread out the plot material, of The Red Cavalier, like the content you'd likely find in a suitcase from the era, it would be as plain and familiar as a straight razor, a bank book and black-and-white photographs.

The backdrop is a castle in the country side of Yorkshire, dating back to the Wars of the Roses, which comes with a ghost garbed in the costume of the days of the Merry Monarch and the unresolved death of the previous owner, Sir Roger Grainer – stabbed in the library with a poison smeared, Hindu dagger. Sir Roger had stocks in the ruby mines in Burma and applied this wealth to fill Twin Turrets with a collection of Hindu curios and idols. Statues of foreign deities line the hallways and the neighborhood has recently been plagued with burglaries reputedly done by the spectral cavalier of the castle, wrestled free from the gibbet cage to plunder once again.

Twin Turrets can be regarded as a problem on the market and not a property that can be easily foisted on a proper, English lady. However, it's Miss Egerton who snatches the lease from under the noose of Prince Kassim Bardai and even matched the outrageous sum he was willing to pay for it. Miss Egerton wants the place for the summer to couple her nephew, Maxwell "Max" Egerton, but he has plans of his own and they involve another woman. And, somehow, Max is acquainted with Bardai, who never stopped pressuring his aunt to hand over the lease, but manages to secure an invitation for the prince.

Meanwhile, at Twin Turrets, statues of Eastern idols are toppled from their base in the dark of the night and a friend of the Egertons, Lord Reginald Borrowdean, watches how the events and cross-relationships culminates in another murder committed in the library – while a fancy dress party was in progress. On the surface, the motive of the murder appears to have been the possession of the Azra-El-Kab ruby, a ball of fiery red fire, which was stolen from the body and the red cavalier had been seen at the scene of the crime, but they also discovered a piece of spangled dress clasped in the hand of the victim. There's much to do about who locked and unlocked the library door, and when, and who was possession of a spare key, but there's hardly any ingenuity about it and painfully lays bare how overwritten the story and outdrawn the plot are. The chapters covering the inquest and the explanation seemed to never come to an end. I still feel like I haven't quite got there yet.

The Red Cavalier didn't profit elsewhere, either, because the setting with its homegrown legend furbishes the story with the same amount of ghostly, suspenseful atmosphere as a science lecture hall and Locke also failed to capitalize in the characters department. There was an interesting contrast between the English and East Indian characters, and their views on their inter/national "ties," but it never went beyond mere racism. Locke might as well have gone all the way and called the book Dark Are the Moors. It fits the setting, color-theme titles and, you know, the racism.

By the time (well into the story) Borrowdean calls in a private detective from London, a "young woman professionally known as Mercedes Quero" who build herself a "reputation as a solver of unsolvable mysteries," it's too late to safe the book. Quero showing-off her cleverness and dexterity with a tiny pocket revolver falls horribly flat and the overdrawn explanation, euphemistically entitled "Gathering Up the Thread," didn't do much help either. Nor did surprise twist. Long story short, the premise was better than the end product.

Well, that could've been a great post, if you could measure greatness in a hack review by hack reviewing an extremely hacky mystery novel. Anyhow, I hope to be back after Christmas with a more jolly review and I'll probably be returning to more regularly to some modern mystery writers. Any locked room mysteries? Well, that's a possibility. Sure, sure. Let's wait and see. And in meantime, I hope you have a merry what-ever-it's you happen to be celebrating around this time of the year.
Geplaatst door TomCat on 12/24/2013