The Scarlet Thread of Murder

"We balance the probabilities and choose the most likely. It’s the scientific use of the imagination."
- Sherlock Holmes (The Hound of the Baskervilles, 1902)

I have often maligned the Golden Age of Detection Wiki as a virtual Who's Who of who the hell are these guys, but you begin to appreciate that long list of obscure names even more when you're confronted with a writer that even the GADWiki draws a blank on – such was the case with Gladys Edson Locke.

A more profitable source of information, however, was the website of the Dorchester Atheneum, which revealed a scholar and teacher was behind the Locke name who had nurtured literary ambitious from the time she was a child and penned a biography of Queen Elizabeth I as a college student. Locke moved to America in 1924 and earned a Master's degree in English at Boston University, which led her to becoming a teacher of Latin and English at a high school in Mildford, New Hampshire. In her personal life, Locke was an active Unitarian Universalist, member of both the church and the Republican party, and belonged to the Boston Society for Psychic Research – a rich background to draw from for less than a dozen mystery novels.

The Scarlet Macaw (1923) was Locke's second stab at the detective story, preceded by The Red Cavalier (1922), apparently lauded by critics at the time as one of the best mysteries of the year, but here there are a few faults in the structure of the plot that could not justify such a comment. Not that The Scarlet Macaw is a bad detective story. It's just that Locke's plotting seems to bow nostalgically to the detective stories of her youth and not always done effectively. 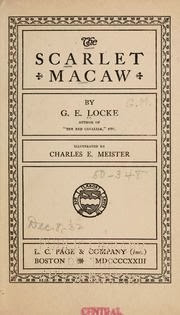 The story opens with Mr. Arnold Percival Inderwick, attached to the banking house of Palford Brothers & Palford, receiving a distressing phone call from Jasmine Holland, secretary of a famous playwright and treasured client of the firm, Genevra Tressady, begging to come to Pomander Lodge. They've heard Genevra's agonizing and crying accusations, "you have poisoned me, you have poisoned me," before everything went silent in her private and windowless study, but the door is locked from the inside and the skylight barred. And when the door is (finally!) pried open, they're confronted with a dying Genevra pointing to a tiger-skin rug and muttering the dying words, "the tiger's eye," and the titular macaw shrieking out the words "Nella, Elfinella."

A play Genevra was working on, Titania's Flight, an extravaganza involving fairies, is missing from the study and traces on the body show her assailant violently wrenched the rings from her fingers, but the instrument of murder in order to inject the poison also fails to turn up in the room – precluding suicide from the outset. Inspector Burton from Scotland Yard and Inderwick discover Pomander Lodge to be funk hole of distorted-and cross relationships, false identities and professional criminals lurking in the background. There's even a character shipped in from Australia and the poison is a "little known East Indian drug, Purpurus Somnus, or the Purple Sleep, so called from the purple discoloration of the skin of its victim," which is voluminous verbiage to say you're still very British in spirit.

But for all their work, Burton and Inderwick are only the legman of the investigation and halfway through the story, Mercedes Quero, one of the early female private detectives of fiction, is introduced to the reader – only to disappear until it's time to tie together all the threads at the end and a lot of her work is done off-page.

The solution to the locked room mystery and the identity of the murderer betrayed Locke's interest and passion for history, because they both felt out of place and belonged to the time of medieval court intrigues and robber barons. The method for the impossible poisoning would be perfect for one of Paul Doherty's historical mysteries, which is exactly the problem with a mystery novel set in contemporary 1923. I think Locke's name would have echoed more today had she written historical detective stories. The Scarlet Macaw and it's locked room trick had been of more interest, today, if the locality of the story had moved a few hundred years into the past – leaving no room for the some of the shop-worn tropes from the 1920s and the even older sensationalist novels we feel somewhat ashamed of now. It is, in fact, the exact opposite of what Peter Dicksinson successfully attempted in The Poison Oracle (1974), in which modern civilization encroaches on the ancient costumes of a small sultanate and happens to also include an impossible poisoning in the plot.

But the new-fangled crimes committed were harmoniously balanced with the old customs of the country, while in The Scarlet Macaw, the old-school crimes struck a decidedly false note in the modern-day setting. It's almost the same feeling as when you plough through a contemporary locked room mystery and discover the author was under the impression that small, but deadly, animals, hidden passageways or a suicide disguised as a murder are acceptable explanations. No. You have to do better than that. Luckily, Locke was not that bad, but, altogether, the solution was better fitted for a historical setting and, overall, I can't say I didn't enjoy this little curiosity and I'll return to Locke to see what all the fuzz was about with The Red Cavalier.

I'm on still on the trail of obscurity! Not as much in these past few weeks as I wish I could've been, but I'm still going.