"Good old Watson! You are the one fixed point in a changing age. There's an east wind coming all the same, such a wind as never blew on England yet. It will be cold and bitter, Watson, and a good many of us may wither before its blast. But it's God's own wind none the less, and a cleaner, better, stronger land will lie in the sunshine when the storm has cleared."
- Sherlock Holmes (His Last Bow, 1917)

My last review of October was Fire in the Thatch (1946) by E.C.R. Lorac and the plot was placed against the backdrop of the aftermath of the Second World War, and, without design in mind, I'll be closing this month with a mystery novel portraying the social turmoil in the wake of the armistice of 1918 – ending the Great War that was supposed to put a premature end to all future wars. 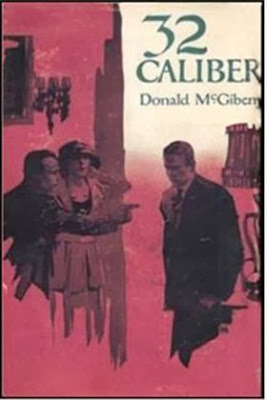 I place the Golden Age of Detective Fiction between 1920 and 1960 (the fifties were its twilight years) and Donald McGibney's 32 Caliber (1920) can therefore be considered as an early Golden Age mystery, but McGibney was not a trailblazer in terms of story telling and ideas. McGibney was not a Conan Doyle or G.K. Chesterton, whose stories were the building blocks for the period, but he did gave an interesting picture of the post-WWI era – framed as a well done detective story.

The theme of a changing society makes the personal problems of Warren Thompson, narrator and lawyer-cum-amateur sleuth, seem conservative in comparison: his sister, Helen, has plans to ditch her husband, Jim, and elope with Frank Woods.

Jim Felderson is Warren's partner in the firm and brother-in-law of whom he's genuinely fond, while Frank Woods is a decorated veteran who came from the outside on war business from the France government. Warren and Jim wrench themselves between Helen and Frank fitting a domineering antagonist in 19th century maiden-in-distress novel. These four characters represent the clash between the old and new world that's happening all around them. Warren is worried that the "loose morals" of his sister and Frank will be food for the scandalmongers of The Star and Jim even cast out some lines to check if there are any skeletons in Frank's closet. I guess the passage of time perfected the characterization of Warren and James and portrayed them, to modern eyes, how McGibney intended them – and, of course, this tug-of-war for Helen has to end tragically.

There's an automobile accident, killing one and severely wounding another, but the case reeks of murder with the involvement of another car disappearing after the crash. The post-mortem gives definitive proof of their theory and gives an explanation for the title, but also carries grave implications for the wounded person. I'm always willing to cut the official investigators some slack in these early stories for oversights or lack for the finer details of forensic science, because the first mob-hits with "Tommy Guns," during the Prohibition Era, were mistaken as the work of entire squads of gunmen. However, the clues Warren dug up from the car had to be found by even a remotely competent police force, even in the 1920s, but the only thing that really bothered me was that the other car (coincidently) was transporting another batch of suspects. One of them, Zalnitch, a Russian ring-leader behind the gang that blew up a few steamship piers in 1915, and recently pardoned by a Governor under pressure by the labor people in a time of reelection.

The explanation for the shooting of the car took me by surprise and, obviously, not a trick easily retooled and imitated, but combined with the words of the wounded person on what happened would've provided McGibney with the materials for a neat and daring impossible crime story. And no. I'm not suffering from withdrawals. I've had my fill of locked room mysteries for this month. I'm just pointing out the possibility that this social crime story could've easily been a spooky tale of the impossible.

Otherwise, 32 Caliber is a cleanly written and plotted as a double tap to the back of the head.
Geplaatst door TomCat on 11/30/2013