A Bridge Too Far?

"Let's not invent elaborate excuses to drag in a discussion of detective stories. Let's candidly glory in the noblest pursuits possible to characters in a book."
- Dr. Gideon Fell (The Hollow Man, 1935)

J.C. Masterman may've been one of the last of the erudite, university dons who saw the detective story as a fertile playground of the mind and interrupted his scholarly pursuits twice to pen a full-length mystery novel: An Oxford Tragedy (1933) and The Case of the Four Friends (1957). The sleuth in both stories is a German lawyer, Ernst Brendel, with a European reputation and his occasional utterances in his native tongue completed the image of the reputable foreigner with a deep understanding of the English people and human nature in general, i.e. a literary descendant of Hercule Poirot.

Fittingly, I began with the second book in this two-part series, which is subtitled "a diversion in pre-detection," and put a new spin on a then (fairly) new angle that Leo Bruce's Case with Four Clowns (1939) and Pat McGerr's Follow As the Night (1951) introduced to the inverted detective story – a who-will-be-done-in-and-by-whom! A story in which you not only have to figure out the identity of the killer, before he strikes, but the name of the victim-in-waiting as well!

The Case of the Four Friends has a story within a story structure and is narrated by Brendel to three of his friends in the Senior Common Room at St. Thomas' College, Oxford, after a game of bridge deteriorates into a discussion about crime detection. Brendel showcases his deductive abilities similar to Philo Vance's dubious poker scheme from The Canary Murder Case (1927) by analyzing and exposing the weaknesses in the playing styles of his friends. I've to pause here for a moment and wonder how it's possible, after plowing through fields of mysteries of British stock, to still know next to nothing about bridge. If Brendel had given his expose in Chinese, I probably wouldn't have noticed it. And yes... the post-title is a pun (tee hee!).


Anyway, there's a story behind the intellectual posturing of Brendel, but, like a reluctant vampire about to turn down an invitation, has to be nearly pressured in staying late to tell his pre-construction of a crime that was prevented – which is interspersed with their analyzes and commentary.

Charles Sandham stands at the head of an old-established and respected firm of solicitors, Sandham, Sandham and Bovis, dating back four generations and has a traditional New Years golf-and bridge holiday which originally began with three of his WWI army comrades. But, one by one, they fell off and were replaced. Currently, the other three "friends" consist of Evelyn Bannister, his oldest friend, Toby Barrick, a junior partner in the firm, and Bannister's nephew, Piers Gradon. In the first part of this pre-construction, the chess pieces are introduced and we learn of what goes on behind the pristine reputation of Sandham's firm – from embezzlement and petty rivalries to blackmail.

Meanwhile, in the Senior Common Room, Brendel's narrative is interrupted not only to discuss the story itself, but also to lecture on (for example) the unpopularity of blackmailers in fiction – where as thieves, highwaymen and pirates often become the hero of the tale. There's also an exemplary piece of plot-driven characterization that I particularly liked. A heiress of major interest to both Barrick and Gradon, Dhalia Constant, is described as an "advanced yet static pawn," a piece that had been "boldly advanced two or three squares at the commencement of the game, thereafter remains static" and "its capture is the darling wish of one player... its defense the sustained endeavor of the other." 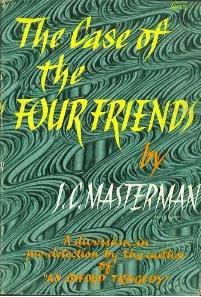 The following section of the story has Brendel as the narrator and a participating character, because he was staying at the same hotel as the New Year's Party of Sandham and becomes a player in the events on a very peculiar night. The night in question is seen from the view point of the various characters, adding up to rashomon-like accounts of what happened, but I think the conclusion can be experienced as disappointing by some readers and they'll be glad to find that one of Brendel's friends provided an alternative solution after he retired from the room. The solution I was suspecting (by the way) and one that owed some debt to a very famous mystery novel. But hold one, Masterman has tucked away the introduction to The Case of the Four Friends at the end of the book and you could call it a defense of his own story. The English language would allow him to call it that. Sure. Here's a direct quote from the "introduction" by Masterman: "This, My Lord... is a very bad book, and it is my painful task, without undue prolixity, to expose its manifest faults and absurdities". As you can understand, the afterword made me feel justified for liking the book. Masterman was a good chap, as Cap. Hastings would've said.

Finally, I should’ve mentioned Anthony Berkeley's The Poisoned Chocolates Case (1929), which shares similarities in structure (a group discussing a murder), but I felt The Case of the Four Friends is what Agatha Christie's Cards on the Table (1936) would've been like if the setting had been used to develop the central idea from the short story "Wasp's Nest," first collected in Double Sin and Other Stories (1961), into a full-fledge novel.
Geplaatst door TomCat on 11/07/2013