He Came With the Rain

I'm still on the trail of obscurity, which is how I ended my previous review of G.E. Locke's The Scarlet Macaw (1922), and the next stop takes us back even further to the early dawn of the Golden Era of detective fiction.

A time when editions of Frederic Arnold Kummer's The Green God (1911) occupied the same shelve space and bookcases in stores, libraries and homes with the greatest and most influential mystery novels of its time. A.E.W. Mason's At the Villa Rose (1910), G.K. Chesterton's The Innocence of Father Brown (1910) and R. Austin Freeman's The Eye of Osiris (1911), but The Green God became a title known mostly to collectors and scholars – even if the plot of the story could very well have thrown fuel on the fiery imagination of a young John Dickson Carr. Yes. It's one of those old-fashioned brass affairs with a seemingly impossible crime and a suggestion of supernatural residue drifting far in the background. 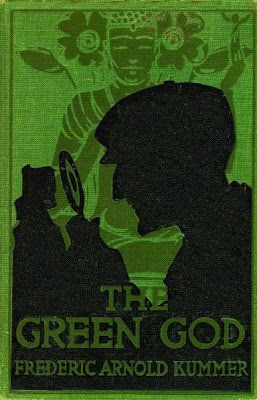 Owen Morgan is braving a severe cloud burst on his way to the Half-Moon Hotel, passing through the village of Pinhoe, when an automobile picks him up and drives him to the home of Major Temple. The driver is bronzed and rugged Mr. Robert Ashton, back from an adventure in China and ready to finalize a deal he made with the Major – an emerald statuette of Buddha for his collection in exchange for the hand of his daughter. Muriel Temple has no desire to marry Ashton and during diner, Morgan, now an uncomfortable guest, notices friction between the Major and his prospected son-in-law.

Morgan decides to take Muriel after the night has passed away, but, the following morning, the household is awakened by a scream and a thump from the Green Room (supposedly haunted) and after breaking down the door they find Ashton with a peculiar dent in his skull. The wreckage of the door show it was clearly dead bolted when it was beaten down and the windows were latched, which must mean both the murderer and the statuette of Buddha dissolved from the scene as if they never even existed! The chapters investigating and discussing the circumstances of the crime are the most satisfying portions of the story, because you see a pre-GAD writer building upon the foundations laid by Gaston Leroux and Israel Zangwill – eventuating in a nifty false solution based on a bloody handprint left on the windowsill and a perfume scented handkerchief.

The eventual solution was not bad, original even, especially the first step to the trick I particularly liked, but the second part owed some debt to the weird menace/impossible crime stories from L.T. Meade and Robert Eustace A Master of Mystery (1898) – giving coincidence a little bit too much sway in the game. But altogether not bad, even if some information should've been shared with the reader in a much, much earlier stage of the story to have a fair shot at solving the locked room angle, however, I still liked the idea behind the whole set-up. It's a consolidation of what was and what was being created at the time. The solution for the vanished, emerald statuette is something that would later become a popular plot-device with Ellery Queen and their followers. Plot-wise, while it has some of what we now consider the shortcomings of its period, The Green God has a lot of rich (impossible) material. By the way, the small pool of suspects, only three, works in favor of the locked room trick.

Unfortunately, there's one problem that will probably disfigure the merits of the book for some readers today, because of the portrayal of the Chinese characters in the story. The dialogue between Major Temple's Chinese manservant, Li Min, and Sergeant McQuade would probably get a comedian or radio DJ to loose their gig, if done as a sketch, but McQuade and Morgan facing a gang of Chinese (who came to retrieve the Buddha) gives The Green God a streak of the Yellow Peril. They were basically one step removed from a lost tribe of blood thirsty Incas. However, if I'm allowed a word of defense on behalf of Kummer, I think what he was trying to tell with this crude, antiquated parable is that us Europeans should try to make an effort not to loot artifacts when we're abroad, because it could come back and bite you. And that's what really haunted the characters in The Green God: not the nameless ghost in the Green Room, but the consequences of their own deeds.

But don't take my word for it... read it for yourself. It's in the public domain and readily available to everyone, everywhere on the web.
Geplaatst door TomCat on 11/17/2013