After the Nightmare Has Passed

"Let me have the best solution worked out. Don't argue the matter. The difficulties will argue for themselves."
- Winston Churchill

The names of "E.C.R. Lorac" and "Carol Carnac" were pseudonyms belonging to the same novelist, Edith Caroline Rivitt, whose bibliography is an impressive résumé of a prolific mystery writer who had no problem churning out three or four books a year, but that apparently came at a cost.

If you go to Lorac's GADWiki page, there's a positive comment from the lauded reviewer of the Observer, "Torquamada," praising her pleasant style, ingenuity and sound characterization, which ran contrary to Nick Fuller's experience with Lorac that he described as pedestrian or humdrum books. My only brush with Lorac was Murder by Matchlight (1945), which I read years ago, but the only fragments from that story still clinging to my memory are the atmospheric bits and pieces about London during the blitz of the Second World War. Those dark days when ARP wardens and the wreckages of bombed houses dominated the streetscape, however, I couldn't tell you a single detail about the plot and that's usually not a good sign. 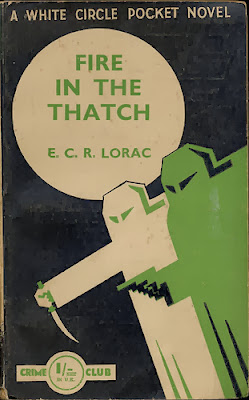 On the other hand, the recollection I did retain of Murder by Matchlight dovetailed nicely with the background of Fire in the Thatch (1946), which is set in post-WWII England and the scars that the war left run through the plot. The charred remains of the crime-scene itself brings back haunting images of bombed-out, London houses. But, first things, first...

The old Devonshire Colonel Roderick St. Cyres has a small cottage on his hands, Little Thatch, laying in neglect after the previous tenants quietly passed away and St. Cyres wants to let the place to someone who can restore the place and its garden to its former glory – except if it's a city dweller who wants to turn the house in a weekend playground. Naturally, the colonel turns down his daughter-in-law, June, who asks on behalf of Tommy Gressingham if he could take the place off his hands. The son of the St. Cyres' and June's husband is still a Prisoner-of-War, and poor June feels like she's wasting away in the countryside and wants to bring some of her friends over for a permanent play date.

St. Cyres had already received a letter of recommendation on behalf of an invalid Navy officer, Nicholas Vaughan, from a Commander Wilton and Vaughan is the one who takes possession of Little Thatch before Gressingham even gets a glimpse of it. Vaughan is a bulk of a man sporting an eye-patch, seeking a quiet life in the country and works hard at restoring the thatched house with its garden, orchards and surrounding pastures. St. Cyres knows he's preparing a home for a woman and while his tenant keeps to himself, Vaughan's blends into the community and they're genuinely upset when he dies in an all-consuming inferno. The local authority is convinced Vaughan was the victim of an unfortunate accident (faulty wiring), but Commander Wilton is convinced there's more to the case than meets the eye and asks Scotland Yard to look into the case – and they send down Chief Inspector MacDonald.

MacDonald is a bland, unassuming character with a sharp mind for facts and spotting a Shakespeare quotation when one is chucked at him, but he's just there to point at the murderer when the time came to wrap up the plot. And that wasn't a smooth job either. MacDonald himself admits that the explanation "sounds complicated in the telling, but the whole performance was possible." It wasn't so much that the solution was bad as it was unconvincing and struck me as a poor-man's John Rhode.

All in all, not a bad read or mystery, but there are definitely problems when the background theme of a nation picking itself up after a devastating war is more interesting than the plot itself, but the fact is that I will probably remember Fire in the Thatch only for its post-WWII content, which forces me to agree with "Torquamada" on one point: the progression from war (Murder by Matchlight) to peace (Fire in the Thatch) is a nice, stylistic cohesive in a series that would otherwise only be bounded together by the presence of Chief Inspector MacDonald.
Geplaatst door TomCat on 10/29/2013