The now-late H.R.F. Keating emerged as a mystery writer at the tail end of the Golden era, publishing his first novel in 1959, but didn't made his name until five years later with the creation of a downtrodden, Bombay policeman, Ganesh Ghote, whose trials as an underdog made him a fan favorite. 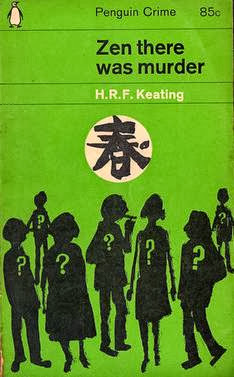 In those intervening years, Keating accumulated experience as a novelist by cutting his teeth on a handful of standalone detective/thrillers and his second foray, Zen There Was Murder (1960), impressed me as a farewell to a previous, by-gone era. The setting is an old-fashioned, English country mansion converted into a school for adult educational courses (e.g. philosophy) conveniently occupied with a closed circle of suspects and a Japanese artifact that ends up being swiped from the premise – presented to the reader in the guise of a locked room mystery. However, don't expect too much from its explanation, because that's the only part of the solution in which contemporary attitudes rears it ugly head.

Mr. Utamaro has the task of lecturing a small, but argumental, assembly on Zen Buddhism. There's a visiting schoolmaster, Alasdair Stuart, and a clergyman in limbo, Rev. Cyprian Applecheek, alongside the misses Flaveen Mills and Olive Rohan, but Honor Brentt is there hunting material for her weekly column in The World with her husband, Gerry, in tow – in order to help him abstain from women. Zen is discussed for the first couple of chapters, when the first disturbance happens: a Japanese small-sword, wakizashi, vanishes from underneath its glass showcasing that was hotwired to a burglar-alarm.

They had to install an alarm system after the media picked up on a story attached to its bigger brother, the katana, now residing in an American police museum and confused the swords. However, the age of the small-sword gives it a bloody history of its own, because it was the blade used for hara-kiri. As I said above, you shouldn’t expect too much from the theft of the sword and stands out in the story as a small piece of anti-detective material in what’s otherwise a respectful send-up of the genre. The group decides to keep the police out of the affair and conduct their own sanzen interviews, in which Mr. Utamaro materializes as the Asian compeer of the Hungarian historian, Dr. Bottwink, from Cyril Hare's stand-alone mystery An English Murder (1951).

Mr. Utamaro is unable to prevent the small-sword from turning up protruding, predictably, from the body of one of his students, but he's able to solve the case and Keating gave his readers a surprisingly fair opportunity to do the same. Granted, it's not all that difficult to solve and I was put on the right track, early on, by what might have been unacknowledged joke in the story. There were also ideas planted here that took shape in succeeding novels. Here two German maids regularly interrupt the story to comment on the characters and events taking place in that sprawling mansion and they may have paved the way for Mrs. Cragg, a charwoman and occasional sleuth, from Death of a Fat God (1963) and a number of short stories. The seemingly impossible disappearance of the Japanese short-sword and how it came to disappear was revisited and improved upon with a vanishing one-rupee note in The Perfect Murder (1964).

Zen There Was Murder stands as a fair-play detective story as well as allowing the readers of today to examine the ideas a young writer was working with and a writer who, evidently, never seems to have lost that youthful spark of enthusiasm for writing and mysteries. I have said in the past that Keating was as a mystery writer at his best when he wasn't trying to write mysteries. Keating was at his best when he hurled Ghote into a David vs. Goliath-style battle-of-wits, but he wasn't completely inept with the form and I'm glad to discover that The Body in the Billiard Room (1987) wasn't a one-off as a good example of classic, English drawing room mystery.

By the way, I really love the title of this book.