"Accursed be he who plays with the devil!"
- Friedrich Schiller

After posting my review of Donald McGibney's 32 Caliber (1920), I glanced at the hillocks of Mount To-be-Read and indecision made its move to the forefront as primary advisor, but I was able to counter the initiative after Ho-Ling posted a review of Jan Apon's Een tip van Brissac (A Tip from Brissac, 1940) – an obscure, Dutch-language mystery novel. 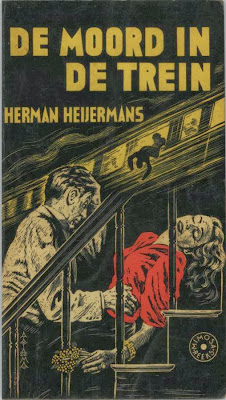 I happened to have one or two little known, home-grown detective stories laying around and picked Herman Heijermans' Moord in de trein (Murder on the Train, 1925), which has the dark clouds of literature and history hanging over its authors. Yes. Plural. Heijermans passed away in 1924 and left behind an unfinished manuscript, but an eminent writer, A.M. de Jong, was able to complete the final chapter based on the directions and notes from its original author. A.M. de Jong was a prolific writer and contributed to a socialist comic strip (apparently) known for handling sensitive and controversial topics, but his socialist sympathies were not appreciated during the German occupation of '40-45. On October 18, 1943, assassins of the Dutch-SS rang De Jong's doorbell and stepped back into the darkness in order to have a clear shot at the silhouetted outline in the hall-lighted doorway – signature method of the Silbertanne (Silver Fir) murders. I'm glad to report a few of them got an appointment with a firing squad after the war ended, which, I'm sure, was an experience far more threatening to the personal security than the ideas of an ailing, middle-aged writer... even if De Jong had resorted to puns.

The dark touch comes in the opening and closing chapters of Murder on the Train, written respectively by Heijermans and De Jong, in which Satan himself visits the key players of the story and one them is a self-absorbed writer, Hans Thyssen, but there's also a rich-banker, Arthur Rondeel and the hotel rat Karel Johan Tulp (a.k.a. Charles Jean Tullipe). The only thing they seem to have in common is a ticket for the D-train to Paris, however, it's going to be an extraordinary journey filled with shenanigans. A German widow, Mrs. Menzel Polack, is drugged and robbed of her jewelry in the ladies room, while another passenger, Nathan Marius Duporc, Inspecteur of the Amsterdamse Centrale Recherche, witnesses how a body is being pushed from the train crossing the Maasbrug and disappear into the waters below – making him grab for the emergency brakes.

There's one passenger presumed dead on account of a blood-soaked compartment bunk and the red smeared brake-handle tells the story of what must have been a battle for life and death, in which the victim was forcefully pushed through the window. A triangle is drawn in blood at the foot end of the bed. Another person is unaccounted for and Duporc has to map out the complex movement through the compartments and stations stops to get a reasonable picture of what happened, but the rough, short-spoken Duporc has to spar with nearly every suspect he encounters. And he does so as he hops from city to city, hotel to hotel, and through the various layers of society – from the daughter of the banker to checkmating the small-time criminal and crony of the hotel rat, Jaap Eekhoorn.

Ho-Ling mentioned in his post on the Jan Apon novel his strange habit of reading Dutch mysteries that aren't set in the Netherlands, such as Robert van Gulik’s Judge Dee (ancient China) and Bertus Aafjes' Judge Ooka (18th century Japan), which he puts on his eclectic reading rather than a trope of the genre. But that's not true. Up to the mid-1920s (with the arrival of Willy Corsari's Inspector Lund), Dutch mystery writers imported their detectives: Ivans had the British Geoffrey Gills and Havank the French Charles C.M. Carlier (a.k.a. De Schaduw). I think there are perhaps two explainenations for this: a) detective stories have never stood in very high standing over here and this might have been an excuse for those early writers to get away with it b) mysteries with a foreign flavor simply sold more, because people didn't had the wealth back then to go mass-holidaying. The exploits of a detective attached to the Sûreté may've been more appealing to the reading audience than an intrigue in their own backyard, but the intercontinental flavor has always been very strong in these early Dutch mysteries – including Murder on the Train. There are characters from Australia and Germany and the text is littered with phrases and snippets of conversations in French, German and English. It was definitely a trope of the time. If anything, Van Gulik, Aafjes and Van de Wetering's Inspector Saito are continuation of this international tradition.

Anyway, I read Murder on the Train under the assumption it was an amusing, busily plotted and intelligently written detective story with a strong opening that the ending simply couldn't live up to, but the middle part served its purpose for the solution. And it was very Carrian! I could draw some comparisons here with some of his and another famous detective story, and if this book had been translated in English at the time, it would've probably been tagged as the ancestor of those stories. But I won't be messing around here with spoiler-tags, because the posts on foreign, untranslated stories are mostly ignored (see Ho-Ling's post) and that means it will be read by a very small number who have read this book and happened to stumble across my blog. I'm also sleepy.

However, the motivation and resolution was not something John Dickson Carr would've stuck with, more reminiscent of Anthony Berkeley, but it does defy the common notion that Golden Age mysteries snug up to the upper-classes, ignored the lower-classes and were all about restoring order. You could argue order was restored, but every way you turn it, this is more a cruel than a cozy mystery novel, but a good one at that. Just take the last sentence for example, "it was simply the tip of Satan's vanishing tail..."

The trail of obscurity has really brightened up lately.
Geplaatst door TomCat on 12/04/2013