Last time, I read the engaging, lively written and plotted The Fox Valley Murders (1966) by John Holbrook Vance, who's better known to fantasy and science-fiction readers as Jack Vance, which presented the traditional, Golden Age detective story as a thick slice of small-town Americana in the 1960s – sprinkled with a variety of impossible crimes. A sadly short-lived, unfinished series that ended when Vance abandoned the partially completed The Genesee Slough Murders. It would have been the third novel to have featured Vance's series-detective, Sheriff Joe Bain of San Rodrigo County, California.

I decided to read the two novels and the unclothed, skeleton manuscript of the third book back-to-back, because I'll probably appreciate the unpolished manuscript better with the two completed novels fresh in my mind. So today, I'll be looking at the second novel in the series, The Pleasant Grove Murders (1967). 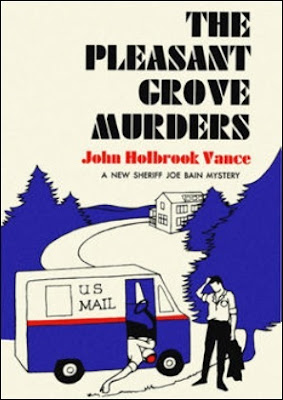 There's a notable difference in approach to plotting and storytelling between The Fox Valley Murders and The Pleasant Grove Murders.

The Fox Valley Murders is a packed, constantly moving story in which a series of suspicious looking, seemingly impossible accidents and natural deaths coincide with the return of a convicted murderer to the community and an important election – which don't always link up in expected ways. The Pleasant Grove Murders is mostly focused on the first of three hammer murders and the suspects living on Madrone Way where the crime was committed. This made for a clearer, tighter and better clued detective story than The Fox Valley Murders!

An introduction of the primary players opens the story, covering numerous years, beginning with the destruction of a tree house as children to a failed marriage and an engagement.

Sam and Miriam Shortridge are "small-town aristocrats" and became the elite by being the proprietors of Pleasant Grove's largest department store, which is reflected in their children, Marsh and Starr, who have been described as "absolutely feudal." Starr was a haughty child who had "compared herself to the rank and file of humanity" and "humanity had come off second best," while her older brother simply is a prig. A very different child is the "extremely pretty girl of Starr's age," Alice, who lives next door with her parents, Guy and Grace Benjamin. And much lower on the social totem pole of Pleasant Grove are two boys, Ken Moody and Bill Whipple. One way, or another, they all have a role to play in a series of murders around the time Alice became engaged to Marsh.

Ken Mooney had become a mail deliveryman and, on an early June morning, he turned his mail van into Madrone Way, where he was murdered, but the body and van with undelivered mail vanished until the following morning – when all were found at the blind end of Madrone Way. Mooney had been killed with "just three good raps" from an ordinary carpenter's hammer and copy of Life magazine was lying under his head. Someone had torn off the address label. This was the only piece of undelivered mail that had been tampered with. So the postal authorities "relinquished the case to Sheriff Joe Bain."

There are two more murders, committed relatively late into the story, which makes the bludgeoning of Mooney the central problem and what happened during the twenty-four hours between the murder and discovery of the body is "a source of enormous puzzlement." A lot of time is spend in figuring out the movement of suspects, combing for a motive and checking alibis and checking magazine subscriptions. One central question, or problem, is was he killed "because he was the mailman or because he was Ken?" So the setting has less of a presence here than in the previous novel with the focus on just one neighborhood. 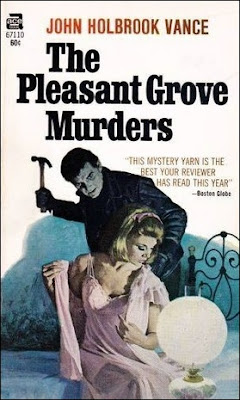 Nevertheless, there are still distinct traces of those small-town life, politics and some minor side plot-threads. Sheriff Bain has another tussle with the owner and editor of the Pleasant Grove Messenger, Howard Griselda, who wants "an up-to-date progressive law-enforcement system" and doesn't believe Bain is "the man for the job." Sometimes, the investigation is interrupted when the sheriff's office has to respond to a madman, armed with .22 rifle, who had climbed to the top of a silo and started "shooting at everything in sight" or visiting a woman, named Luna, who believes she came to Earth from a distant planet, Arthemisia – on a mission which has not yet been revealed to her. A very weird, unimportant plot-thread that felt out-of-place and thought it might be a reference, or even a crossover appearance, linked to Vance's science-fiction work. But apparently not.

One other side-thread worth mentioning is Bain's intention to buy a nearly 100-year-old roadhouse and turn it an old country hotel together with his daughter and mother. Vance was already thinking of retiring the character, but don't ask me why. This series is great!

The Pleasant Grove Murders is not chocking with impossible crime material, like The Fox Valley Murders, but what it lacked in quantity, it made it up with quality and the result is easily one of the best pure whodunits of the 1960s. A detective story with one of those delightfully constructed ladders of clues, logically fitting every piece of the story together, which is even more impressive when you consider most of the (important) clues were hidden in the personalities or actions of the characters – barely any physical and tangible clues. Funnily enough, the ending of the story acknowledged that "the entire case of the prosecution was circumstantial, indirect and hypothetical," but "judge instructed the jury that circumstantial evidence was as good as any" and "they were not required to invent improbable or fantastic alternate hypotheses."

Yet, the circumstantial clues and evidence are more than sufficient to work out this clever little detective story and loved the spot in the book when a tiny detail made everything click together in my head. Very satisfying! If there's anything to nitpick about, it's that Vance was overly generous with his reader by giving one of his clues a distinctly New England flavor. But if something is too good, you really have nothing to complain about.

The Pleasant Grove Murders was written during that dark, dreary decade when publishers had largely moved away from the traditional detective story, but the bright light of the Golden Age shimmered on in the Sheriff Joe Bain series. I don't know why Vance abandoned the series, but the lost is entirely ours.

A note for the curious: I drew some comparison in my review of The Fox Valley Murders with other American mystery writers who used small-town settings, but this series is perhaps closer to Kip Chase's Justine Carmichael series. Chase is a now long-forgotten writer who tried to bring the Golden Age mystery into the 1960s, but he never got past his third novel. Strangely enough, their novels are pleasing mirror images of each other. Chase's Where There's a Will (1961) is a whodunit with a closed-circle of suspects, while The Fox Valley Murders is an impossible crime novel, but Murder Most Ingenious (1962) is a locked room mystery and The Pleasant Grove Murders a whodunit. One has a former, big city homicide cap as detective and the other series a small-town sheriff. Even though their settings aren't that far apart, they obviously take place in different parts of California. Chase and Vance showed what could have been!
Geplaatst door TomCat on 4/14/2020