Secrets of the Heart

"Oh, my son! You don't know my history. I've seen a feller who was dead, and yet who wasn't dead. I've seen a man make two different sets of finger-prints with the same hands. I've seen a poisoner get atropine into a clean glass that nobody touched... as for a murderer floating in the air, I'm expectin' to meet one any day. It would just round out my cycle before the old man goes into the dustbin."
- Sir Henry Merrivale (She Died a Lady, 1943)

There are only about half a dozen reviews posted on this blog concerning my all-time favorite mystery writer, John Dickson Carr a.k.a. "Carter Dickson," whose name, however, I drop whenever as much as a particle of an opportunity presents itself. You only have to look at the number of posts labeled "Locked Room Mysteries" or "Impossible Crimes" to know I had no shortage of opportunities.

I felt that a return to the maestro himself was in order, and Sir Henry Merrivale in particular, but had only And So to Murder (1940) left to explore and I was in the mood for something grander – ending up re-reading one of the best titles in the H.M. series. 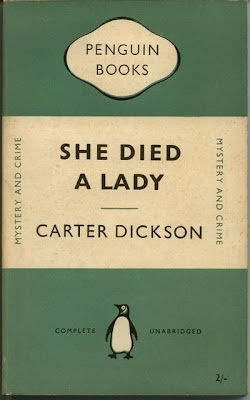 She Died a Lady (1943) is set during the most defining period of the previous century, when Adolf Hitler had set out to conquer Europe and England was one of the last strongholds of the continent where his troops hadn't put boots on the ground... yet. The isolated, seaside town of Lyncombe with its sheer cliffs overlooking the sea, is almost a stand-in for the rest of the country. On top of that stone protrusion a small group of people begin to feel the effects of the war when it begins to intermingle with their normal, everyday problems.

Dr. Luke Croxley's narration of the events begin with a visit from Rita Wainwright, a patient of his son, Tom, who caught herself up in an affair with an American actor named Barry Sullivan, while still being legally tied to her husband Alec – of whom she’s fond and wants to spare his feeling. But her desire to be with Barry grows with the day and Alec's only occupied nowadays with listening to gloomy news broadcasts on the wireless on the war. There, amidst the blackouts and rationing, someone cuts the phone lines and drains the petrol from the cars. Rita and Barry vanish. They only leave a trail of footprints behind on sandy ground of a cliff, "a romantic promontory called Lovers' Leap," which looks out over a seventy-foot drop into the unforgiving tides and rocks below. Everything points to a suicide pact, until they wash ashore and bullets peeled out of the body indicate that they were shot at close range before falling from the cliff. This does not preclude suicide, if the gun had been found at the top of the cliff or somewhere below, but it was discovered somewhere discarded on a road!

This means, according to the evidence, that Rita and Barry were facing their murderer while standing on the edge of a cliff, which entails that the shooter was lighter than air, but still capable of lifting a gun, before apparently ceasing to exist. Or hovered back over the foot prints on to solid ground.

Luckily, H.M. happens to be in the neighborhood to have his portrait done as a Roman senator and being bound to a (motorized!) wheelchair, on account of a broken toe, does not prevent him from leaving an ever-lasting impression on the village – frightening a few of its inhabitants by racing through the town as a cross between Winston Churchill and emperor Nero. However, the comedy does not intrude on the serious and somber tone of the story. It's Merrivale's way of coping with life and he becomes, IMO, more human as the story progresses. H.M. knows how to deal with supposedly cursed rooms that kill, dagger-waving poltergeists and the pseudo-science of telepathy, but a worldwide conflict the size of WWII reduces him to a rather helpless figure vowing "to be some use to this ruddy country yet... just you wait and see!" Before H.M. helped the allied forces plotting Hitler's downfall (you know he did), he did what he does best, find a natural explanation for everything. 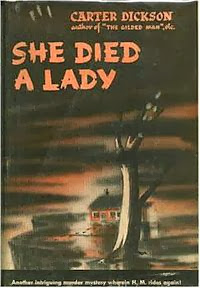 The impossibilities about footprints, whether it’s a single set of footprints where there were supposed to be two or the complete lack of them altogether, always struck me as one of the more difficult tricks to pull-off successfully – even more so if you try to be original. They always have me struggling for possible explanations and She Died a Lady is arguably Carr's most successful treatment of this type of impossible crime, because it's not a stock-in-trade situation the footprints emerge in and thus the solution is original. It's one of those tailor-made for the plot and setting types of solutions that Herbert Resnicow loved to play with during the 1980s (c.f. The Gold Deadline (1984) and The Dead Room, 1987), but the impossible elements do not dominate the story. They're a part of the larger picture that's not only one of Carr's most accomplished mystery novels, but also one of his most mature and character-driven stories, which deserves the reputation of The Judas Window (1938) – as good as that book is in it's own right, it lacks the depth of She Died a Lady.

She Died a Lady is in my eyes Carr's Death on the Nile (1937), one of his favorite mystery novels, and if you look closely at the plot, you may agree with me that Lady might be a very cleverly disguised homage to Nile. If you can't see it, think of a water mirror effect with ripples in it, caused by Carr to give it his own touch. And that's not a spoiler, because (SPOILER, select of CTRL+A to read): it's not giving anything away when Carr’s Eternal Triangle has a fourth side. Vintage JDC!

Finally, I found two more clock-quotes! I know, I know, but I'm still fascinated how the passing of time and the faces of clocks are associated in Carr's stories with impending doom, sickness or herald the death of a character. Sometimes, they even have the face of death, e.g. Death Watch (1935) and The Skeleton in the Clock (1948).

"It inspired in me, I must confess, much the same sense of impending disaster as was inspired in Captain Hook by the approach of the crocodile with the clock inside."

"A clock ticked asthmatically in the dark hall."

I remain convinced that clocks are the source of all-evil in Carr's universe.
Geplaatst door TomCat on 10/03/2013