Death of a Village Troll

"Do you know, Watson... that it is one of the curses of a mind with a turn like mine that I must look at everything with reference to my own special subject. You look at these scattered houses, and you are impressed by their beauty. I look at them, and the only thought which comes to me is a feeling of their isolation and of the impunity with which crime may be committed there."
- Sherlock Holmes ("The Adventure of the Copper Beeches")

The Voice of the Corpse (1948) launched Australian-born Max Murray's career as a mystery novelist and published twelve detectives altogether, uniformly titled, but lacking a series characters – accounting for his neglect in this day and age. A familiar name running through your books has proven itself to be one of the requisites to give your name some shimmer of immortality.

After having previously read The Neat Little Corpse (1951) and The Sunshine Corpse (1954), I had pegged Murray as a transitional fossil between the traditional whodunit and the modern-day crime novel – grouping him with Juanita Sheridan as a storyteller of crime in the guise of a detective story. Not a very apt description for The Voice of the Corpse, which stands as a very decent and well-done village mystery. 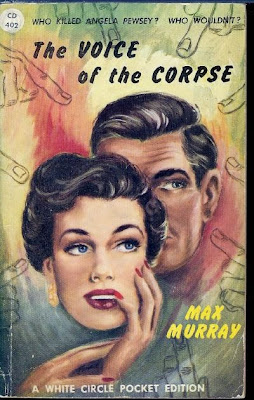 Angela Mason Pewsey is a spinster in her late forties, who managed the fill the emotional void in her life by scattering the village of Inching Round with poison-pen letters and feeds off the fear they generate. However, it's not the taunting or threatening tone that's causing sleepless nights in Inching Round, but that their content is grounded in truth. Someone in the village has been digging around for dirt, and now, that same person has uncovered their secrets – and using it to torture them. Of course, casting furtive smiles at your victims or brazenly informing them face-to-face, is not an advisable course of action when you write poison-pen letters as a past time. So it's not a surprise when someone actually took a whack at her with the proverbial blunt instrument.

Death came when Pewsey was seated behind her spinning wheel, converting a heap of chow dog hair into a pullover, while singing a folk song, which prevented her from hearing the intruder sneaking up from behind. Her black notebook is missing! Constable Wilks and Sergeant Porter are convinced that a passing tramp or gypsy killed Angela Pewsey and that's the angle they're focusing on. This (tiny) aspect of the plot is a bit class-conscience.

Anyway, Mrs. Sim, a local lady, does not share the opinion of the police and asks her family attorney, Firth Prentice, to investigate and he becomes a reluctant amateur detective. There are two well-drawn small boys, Jackie Day and Alfie Spiers, who practically force their valuable assistance on Prentice – even presenting him with a scrap from Pewsey's elusive diary. They've also witnessed several events preceding the murder, but Prentice remains unproductive and sedentary. Not what Jackie and Alfie expected from a real-life detective. In Prentice's defense, nobody seems particularly interested in the identity of the murderer anyway. Prentice wonders at one point how many murders you have to commit in Inching Round before you become unpopular. The story is laced with these humorous observations and bantering comments, usually between Prentice and Celia, Mrs. Sim's daughter, which made a well-written story even more fun to read.

Here’s as good as any place in the review to mention that I was strongly reminded of some of Gladys Mitchell's more conservative village mysteries, like The Mystery of a Butcher's Shop (1929) and Dead Men's Morris (1936), and the only elements that were missing was a pig farmer and a local legend. And maybe a drowning. Everything else was present. Even faint ties to folk song and dancing. Back to the review.

The investigation enters its final stage when Inspector Tom Fowler from Scotland Yard arrives and he's able to pry loose more information and penetrate deeper, even if the villages themselves aren't aware that they helped the inspector. Fowler eventually makes his moves and secures a conviction, but the ending has an excellent twist packed away and was so much more than I expected from Murray. However, the solution works as a double-edged sword, because, morally, it's a highly ambiguous resolution. But, then again, whoever said that all village-themed mysteries were cozies?

The Voice of the Corpse is one of many, many detective stories and novels weaving a pattern around villages and poison-pen letters, but I think Murray's first foray in the genre produced an above average example that stands out due to it unusual ending. The only feeling of disappointment I have now is realizing how much distance Murray had placed between himself and the traditional detective story after this debut novel. I would love to have read more mysteries from Murray written in this vein.

On a final note, one of my favorite poison-pen stories is "The Possibility of Evil" by Shirley Jackson, collected in Murderous Schemes: An Anthology of Classic Detective stories (1996), in which poetic justice strikes down a writer of poison-pen letters.
Geplaatst door TomCat on 10/06/2013