"Violence does, in truth, recoil upon the violent, and the schemer falls into the pit which he digs for another."
- Sherlock Holmes ("The Adventure of the Speckled Band")

I've been lagging behind on my reading lately and Case Closed/Detective Conan is a series in particular that has been behind on reading schedule, but their short, episodic stories, embroidered on an ever-expending canvas of the overarching plot, makes them excellent material to pick up the rhythm of my reading pace – and musical rhythm is the theme of the 46th volume. 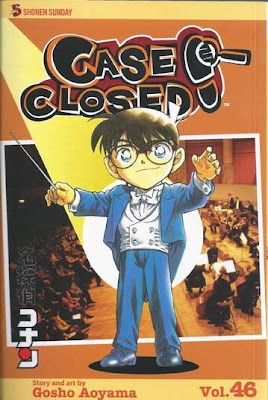 Hasuki Shitara, who'll be playing on a valuable Stradivarius for her grandfather, Choichiro, at his birthday, summons Richard Moore to the ancestral home of the Shitara clan. The problem is that the violin has a history of violence that has recently added a death-curse to the Shitara family legacy, in which everyone who plays the Stradivarius on Choichiro's birthday dies. Two years previously, Hasuki's great-uncle's wife, Emi, fatally stumbled down a flight of stairs and last year it was her father who fell over the railing of a balcony – giving Moore precious little time to clear up a pair of suspicious deaths in order to prevent a third.

Luckily, for Moore's reputation, Conan is tagging along in familiar fashion, but even he can't prevent the murderer from striking again: widowed-husband of Eli, Genzaburo, perishes in the flames and smoke of a fire started by someone in the annex of the house. Genzaburo's room was securely locked from the inside and clues in the room suggest that he started the fire himself by smoking in bed, but Conan smells a rat! The solution to this locked room mystery is fairly run-of-the-mill, however, Aoyama redeems himself when another member of the family falls from an open window – while everyone was listening to Requiem in D Minor in honor of Genzaburo. The room was, again, locked from the inside and there was a chair in front of the open window. So what else could it be but suicide?

You could accuse Aoyama of being one-dimensional with his solutions to nearly every impossible situation he comes up with, basically variations of the same method, however, he mines at an incredible depth inside that narrow strip to find new applications for it. That's perhaps the most amazing part about his locked rooms. I would rank this (as a locked room mystery) somewhere between Paul Halter's Le diable de Dartmoor (The Demon of Dartmoor, 1993) and Cornell Woolrich's "The Room With Something Wrong," collected in Death Locked In (1994).

Overall, this first of two big stories making up this volume was well done and enjoyed the subtle rib poking at the classic, British country-house-style mysteries. The butler, for example, is a starched, librarian-like woman, who runs the Shitara household with the efficiency of a small-country dictator and the ending winks at something that was more strongly condemned in previous volumes, i.e. allowing the killer to commit suicide. Conan's personal believe is that a detective who uses his deductive reasoning to corner a suspect and then does nothing to prevent the suspect from committing suicide, is in the end no better than the murderer himself.

To be honest, I didn't expect too much from the second story, but it ended up being better than I expected and was exactly the kind of story I was in the mood for. Professor Agasa has to chaperon, once again, Conan and the kids from the Detective Boys' Club on one of their many trips and, as to be expected, they stumble upon trouble. One of the boys found a box-like stone with a hole and writing carved in it, in a pond located nearby a derelict warehouse from the Edo period – which belonged to a famous doll-maker from that period and possibly the location of a famous treasure. However, beneath the rubble in the pond they also find the body of a man and, while Asaga runs-off to call the police, they decide to enter the premise on their own.

The place is littered with booby traps and along the way, they encounter other treasure hunters snooping around for bounty and over them looms the shadow of Conan's old adversary, the famous phantom thief, Kaito KID, who's after the treasure himself. This all amounts to what is basically a successful emulation of one of Maurice Leblanc's Lupin-in-disguise stories and showing the fundamental difference between the figures of the Great Thief ("What's the thrill of knowing what's in the box before you open it?") and the Master Detective ("Dumb guy. It's a detective's job to figure out what's inside before opening”).

In between the stories, Conan has finally found a solid lead that goes straight up to the head of the organization that has put him in his current predicament and has been tailing for at least two-and-half-years by the series time-line. This volume is also book-ended with the concluding chapter of a story that was started in the previous volume, in which a dead stargazer left a dying message and concluded with the first chapter of a new story for the next volume.

A regular review will be up ASAP. That... or I'll find some excuse to talk endlessly about locked room mysteries... again.
Geplaatst door TomCat on 10/19/2013