I've reviewed a sundry of short (locked room) stories over the past two years, ranging from the anonymously published "The Grosvenor Square Mystery" (1909) to Anne van Doorn's ghostly "Het huis dat ongeluk bracht" ("The House That Brought Bad Luck," 2018), but my last review of a short story collection was D.L. Champion's The Complete Cases of Inspector Allhoff, vol. 1 (2014) – posted back in April of last year. So it was about time I tackled another compendium and John Pugmire's Locked Room International recently published something that fitted the bill. 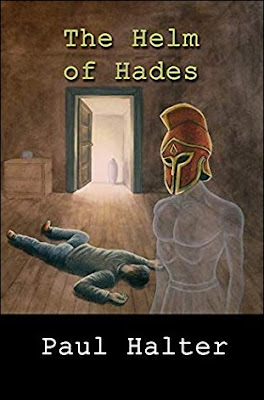 The Helm of Hades (2019) is Paul Halter's second collection of short stories to appear in English, preceded by the appetizingly The Night of the Wolf (2006), which formally introduced non-French speaking readers to Halter's imaginative brand of detective fiction. This second volume comprises entirely of translated stories that were published in Ellery Queen's Mystery Magazine between 2007 and 2019. And celebrated French locked room anthologist, Roland Lacourbe, penned an introduction promising "the wildest impossibilities." Well, that enough to lure me into the back of your van!

"Le gong hanté" ("The Gong of Doom") is the fist of ten stories and takes place at "the meeting-place of a select circle of prosperous Londoners" devoted to "the discussion of puzzling mysteries," The Hades Club, where Dr. Alan Twist tells Superintendent Charles Cullen the story of "a senseless and inexplicable murder" – committed at the end Great War. Colonel Henry Strange has an argument with the prospective husband of his niece, Philip, inside his locked study. During their argument, the haunted gong in the study sounded without being struck and Colonel Strange sank to the floor with an arrow piercing his neck. However, the door of the study was locked on in the inside and the ground overlooking the open window was covered with virgin snow. So there was nowhere any mysterious archer could have hidden to fire the fatal arrow.

A solid and tantalizing premise reminiscent of the locked room situation from Carter Dickson's The Judas Window (1938), but the solution is a coincidence-laden farce and an absolute cheat! I suppose the farcical slant could, sort of, have worked has the ultimate fate of Philip not cast a bleak shadow over the story. However, I did like the false-solution that made use of the kandjar (a dagger) hanging on the wall. Otherwise, a very poor story that should not have opened this collection.

"L'échelle de Jacob" ("The Ladder of Jacob") is an excellently done short story about a man who fell to his death from a great height without any tall buildings or cliffs at the scene, but have already discussed the story in my review of the massive locked room anthology, The Realm of the Impossible (2017). The third story is "L'homme au visage d'argile" ("The Man with the Face of Clay"), but read it before and disliked the solution to the locked room shooting. One of my big no-noes. 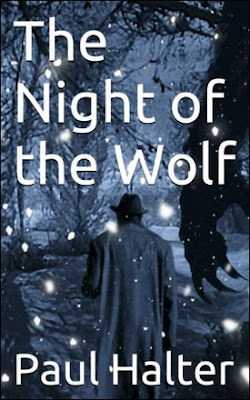 The next story in line is "La vengeance de l'épouvantail" ("The Scarecrow's Revenge") and succeeded where "The Gong of Doom" failed so miserably.

Dr. Alan Twist is in France where Commissaire Pierre Legrand tells him about an abominable crime that took place in Gondeville, a small village not far from Cognac, which involved a dead, but vengeful, husband and a premonitory dream that came to pass only a few hours later – in "the form of an impossible crime." Janine is haunted by the memory of her late, unlamented husband and has a terrifying nightmare that he came back in the guise of their scarecrow. And killed her father with a pitchfork. This nightmare became a reality when her father is found the following morning lying on the muddy ground beneath the scarecrow with only one set of footprints going from the front door to the scarecrow.

A very well-done, properly motivated impossible crime story with a better and more original solution than the answer to the homicidal snowman from "L'abominable homme de neige" ("The Abominable Snowman," collected in The Night of the Wolf). A solution that both worked and was genuinely tragic without the grim bleakness.

"Les feux de l'Enfer" ("The Fires of Hell") is, plot-wise, one of the weakest story in the collection and revolves around a man who can see visions of the future, which he used to predict a series of "inexplicable fires" that even a police cordon was unable to prevent. However, the firebug is easily spotted and the method was more underwhelming than disappointing. You can find better treatments of the impossible fire-starter gimmick in John Russell Fearn's Flashpoint (1950) and Arthur Porges' "To Barbecue a White Elephant" and "Fire for Peace" (collected in These Daisies Told: The Casebook of Professor Ulysses Price Middlebie, 2018).

Last year, I reviewed "Le loup de Fenrir" ("The Wolf of Fenrir") together with "Le livre jaune" ("The Yellow Book") and three other, non-English detective stories in a post entitled "Murder Around the World: A Review of Five Short Detective Stories" – which, like this review, turned out to be a mixed bag of tricks. On the one hand, "The Yellow Book" was a wonderfully crafted story with an excellent variation on a locked room-trick from one of Halter's earlier novels. In comparison, "The Wolf of Fenrir" was only so-so.

"La balle de Nausicaa" ("Nausicaa's Ball") is the only non-impossible crime story to be found in this collection and seems to be modeled after such Agatha Christie stories as Evil Under the Sun (1941), Towards Zero (1944) and "Triangle at Rhodes" (collected in Murder in the Mews and Other Stories, 1937). Dr. Alan Twist is on a much deserve holiday in Corfu, Greece, where he hopes to have a break from all the inexplicable, seemingly unsolvable murders dogging his every step, but, on his first day, bumped into a holidaying Superintendent Cullen. Soon their attention is drawn to the cast and film crew staying at their hotel. And, in particular, the eternal triangle of the group. 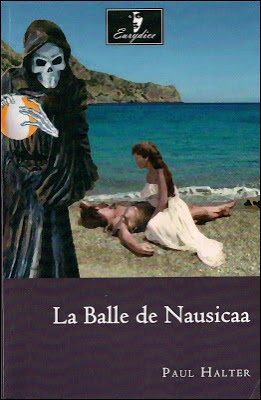 Rachel Syms is a gorgeous actress who was the female-lead in a movie that was shot in the same location a year ago, but she fell in love with her young, unknown screen partner, Anthony Shamp, who, according to the critics, played "a marvelous Ulysses" – returning a year later to shoot the sequel. She brought along her husband, George Portman. A perfect recipe for murder! This comes to pass when George's falls to his death from "a series of steps cut into the rock which zig-zag down a hundred feet to the beach," but the lonely, isolated location of the lagoon severely reduces the number of suspects. The solution hinges on pulling apart a carefully-planned alibi, but there's one technical detail that raised an eyebrow. Nonetheless, this story still stands as a nicely done homage to the Queen of Crime from a modern craftsman of the locked room puzzle.

"La tombe de David Jones" ("The Robber's Grave") is a good example of Halter's fertile imagination when it comes to dreaming up new seemingly impossible situations and reviewed it last year, under the title  "Devil's Soil: Halter, Hoch and Hoodwinks," together with a story from the King of the Short Story, Edward D. Hoch.

Lastly, the collection closes out with the most recently translated short story, "Le casque d'Hadès" ("The Helm of Hades"), published in the March/April, 2019, issue of EQMM. This time the detective is the Edwardian-era aesthete and amateur reasoner, Owen Burns, who acts as an armchair oracle as he listens to the tale of a murder that appears "to have been inspired by the prince of darkness himself." A well-known archaeologist, Conrad Berry, who threw a party to celebrate his greatest discovery, the Helm of Hades. A legendary bronze helmet that makes everyone who wears it "as transparent as the air that you breathe." During the party, Berry is savagely attached inside his archaeological room while people were sitting outside.

According to their evidence, they heard the footsteps of "an invisible creature" walking across the creaky floorboards of the room, open and close the door of the archaeological room, carry out a brutal and noisy assault – after which it retraced its footsteps and knocked over a Chinese vase on the way. As if an invisible entity had entered and left the scene of the crime! A very original and grandly staged premise for a locked room mystery, but the solution, while acceptable enough, has a weakness I've come to associate with Jonathan Creek (e.g. Angel Hair, 2003). A type of involved solution that can only work when it's really, really involved.

I used to believe the short story format brought out the best in Halter, because it allowed him to play on his major strengths (plot and imagination), while downplaying his weaknesses, but have only read a selection of (mostly) his better short stories since his first collection was published in 2006. This colored my perception over the years. The Helm of Hades shows he was very hit-and-miss and needs the length of a novel to give his plethora of ideas some breathing space. Halter still produced a some classic short locked room stories, but, in general, I think he's better when writing novel-length impossible crime stories. Just read L'homme qui aimait les nuages (The Man Who Loved Clouds, 1999) or Le montre en or (The Gold Watch, 2019).

So, yeah, The Helm of Hades is, as so often is the case with these collection, a mixed bag of tricks, but the better specimens, such as "The Scarecrow's Revenge," "The Robber's Grave" and "The Yellow Book," still makes it a welcome addition to my locked room library.
Geplaatst door TomCat on 2/13/2020