Harriette Russell Campbell was born in New York as the daughter of the state's Attorney-General, Leslie W. Russell, but settled down in London following her marriage to a Scotsman and produced eight detective novels between 1936 and 1949 – all but one featuring her regular sleuth, Simon Brade. Campbell appears to have cut her teeth on detective fiction for children having published at least two short stories, "The Escape of Pandora" (1927) and "The Mystery of the Brass Key" (1928), in St. Nicholas Magazine for Boys and Girls. 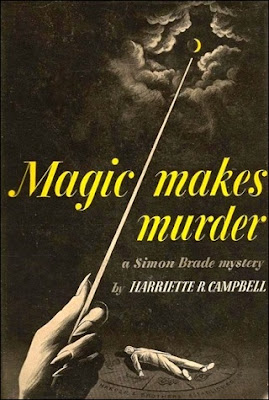 Several years ago, Campbell's detective novels were reissued by a dodgy, short-lived publisher with an overzealous editors who tried to "improve" on the original text, which is why I gave all their editions a pass. Fortunately, Black Heath decided to give Campbell another print-run and began reissuing her novels last year as cheap ebooks. Magic Makes Murder (1943) stood out to me for obvious reasons, but it also helped Anthony Boucher praised how the plot "satisfactorily blended" horror, humanity and logic. Not to get ahead of to the end of the review, but, if Magic Makes Murder is representative of her overall work, Harriette Campbell could very well become another Harriette Ashbrook!

Magic Makes Murder is the sixth case for Simon Brade, "well known to connoisseurs as a single-minded collector of Chinese porcelain," who used his "special gifts of observation in the detection of crime" to finance his expensive hobby. The story begins with three men, Brade, Blackett and Jerrold, sitting in front of comfortable coal fire to discuss a macabre case that had been forced upon the collector. Their discussion is interspersed with the pages from a manuscript written by one of the central characters in a family drama as bizarre as it's fascination. One that had been brewing for decades.

So the second chapter is the first, more lengthier, excerpts from Sylvia Shirley's manuscript, written at the request of Simon Brade, which begins with an extensive piece of necessary family history covering several decades – beginning towards the end of the First World War. John Shirley moved his family to Howells Farm in 1918 where he prospered as a farmer and devoted his spare time to studying the occult. Shirley had built two tower-like ends on the farmhouse where his son, Victor, witnessed him talking or controlling “impish creatures” and “astral shapes” who came from "a lower world," but John Shirley was not a practitioner of the dark arts. He picked the side of light and "he warned the public in grim terms against dabbling ignorantly in occultism." Over the years, Shirley created a happy household at Howells Farm. A household comprising of Nannie, a devout Catholic and utterly devoted to the family, who has looked over Shirley ever since she became wheelchair-bound as a 10-year-old girl. Denis Ridge came to Howells Farm to be Shirley's live-in secretary, but eventually became part of the family and now basked in the charm and comfort of Howells. The widowed Charlotte Lesurier came to keep house for them, but did so much more. Charlotte lightened up the whole place by making "it easy to be gay, difficult to be gloomy." She brought along her 8-year-old daughter, Frankie, who grew up to become Victor's wife. Its "happiness spread to the village, the neighborhood" and wherever his "influence was felt." Where there's light, darkness follows like the night the day. 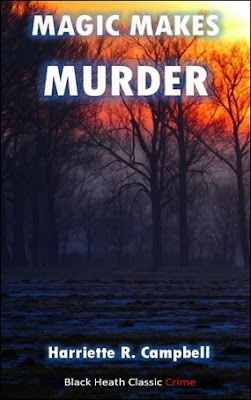 There were three seminal moments that slowly descended Howells into darkness. Firstly, the death of John Shirley which freed his son to dabble in dark magic and began to impose his will on the household. Secondly, the birth of Victor and Frankie's son, Timmy, who his father intended to train, "as some Indians boys are trained," to become a master of magic. Thirdly, the outbreak of the First World War, but there was a five-year reprieve as Victor went abroad to further his study of the occult, but intended to take over Timmy's education when he returned. Those were both happy and troublesome year as Frankie fell in love with Dr. Warren Lang. So the stage had been set for the return of the evil magician.

Victor Shirley's ambition was gather a circle of adepts to control demons and 5-year-old Timmy had "to excel Hitler himself as a Witch Doctor of the future," but Victor's treatment of his son was "unnatural and wrong" – filling Timmy's receptive mind with images which terrified him. The entire household tried to undermine and subvert Victor's corrupting influence over the child, but he was in full control of their lives and their futures. Victor's corrupting influence even intruded upon their neighbors and the village itself. However, the household began to make serious plans to counter him and a clairvoyant warned him that he would find himself in danger from its members, which is why he dragged Simon Brade to Howells. But then the Nazis intervened!

Howells Farm was near enough to London "to see and hear the Battle of Britain and hostile planes frequently unloaded bombs" near them. One night, a bomb landed on the lane outside the farmhouse and left an enormous crater, which was immediately secured by the air-raid warden set out ladders and a warning lights to guard the crater. But did someone took advantage of the situation? Did someone remove the safe guards? Victor is an excellent driver with great eye sights, but drove his car straight into the crater and was left critically injured. So, while the doctors begin to operate on Victor, Brade finds himself as "an embodied threat" of Victor's power over the household as he tries to piece together what exactly has happened. The question whether Victor survives or dies will have consequences for everyone. Not just the culprit. 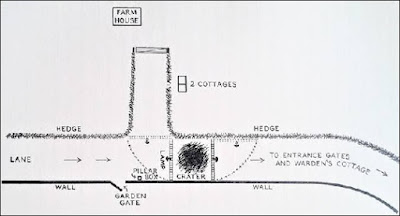 So, once you get past the introduction to the investigation, it becomes evident Campbell partially modeled her work on the so-called British "Humdrums," like J.J. Connington and John Rhode, but her handling of the vital (very original) clues places her closer to John Dickson Carr and Agatha Christie. There are some physical clues like two missing postage stamps, footsteps in the snow or instructing the reader to "get the position of the garden gate into your," but all of the important, tell-tale clues can be found in the personalities and actions of the characters. What eventually exposes the truth to Brade is combination of what was being said, heard and done at the time of the accident. A solution that more than lived up to Boucher's promise of a blend of horror, humanity and logic with a clearly stated and logical solution, but made complicated and morally murky by various, very human elements running through the case. There is, however, a very well done and original piece of alibi-breaking that hinged on (ROT13) gur orqgvzr evghnyf bs Gvzzl yvxr uvf orqgvzr fgbevrf naq ubj ur fnvq tbbqavtug. But even that excellent piece of plotting was dictated by the personalities and actions of the characters involved.

That's all I can say about Magic Makes Murder without giving anything away and whatever you think now regarding the direction of the solution, you're wrong. I, too, was reminded of those three detective novels (Puevfgvr'f Zheqre bs Ebtre Npxeblq, Zheqre ba gur Bevrag Rkcerff naq Pebbxrq Ubhfr), but Campbell pieced together a very different kind of solution that was only loose in its moral resolution. But this is one of those instances where you can't help but sympathize with the guilty party.

Magic Makes Murder is a very unusually-structured detective novel with an opening recalling John Dickson Carr and Paul Halter, but began to take on the shape of the humdrums the moment the crime was committed (complete with diagrams) while the graceful handling of the characters, clues and red herrings is something to be expected from one of the top-tier Queens of Crime. So expect more of Harriette Campbell and Simon Brade on this blog in 2022!