A few years ago, I reviewed Theodore Mathieson's "Leonardo da Vinci, Detective" (1959), one of the more well-known, reprinted stories from his standalone "Great Detectives" series, "in which a famous person of the past acts as detective just once at a critical point in his career" like Captain Cook, Alexander the Great and Florence Nightingale – published between 1958 and 1973 in Ellery Queen's Mystery Magazine. The first ten stories were collected as The Great Detectives (1960). 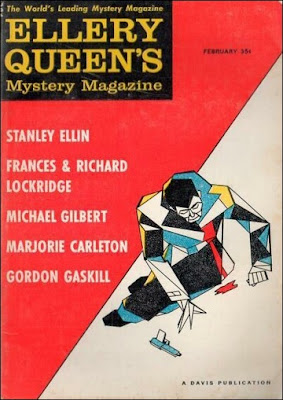 What became clear from my reading of "Leonardo da Vinci, Detective" and comparing it to John Norris' review of The Devil and Benjamin Franklin (1961) is that Mathieson was a better storyteller than plotter. A well intended mystery writer who had a good idea, but his handling of plot and clues were clumsy at best. John even said that the plot of The Devil and Benjamin Franklin would "rankle the hairs of any traditional detective novel fan."

There is, however, an allure to Mathieson's historical detective fiction. Mathieson was not the first to write historical mysteries or even use historical figures as characters, but "most of these had been infrequent or isolated instances" and Robert van Gulik had just began publishing his Judge Dee novels – which made him one of the first to create a series of historical mysteries. While the "Great Detectives" is a series of standalone stories, they are presented as newly discovered and hitherto unchronicled feats of detection revealed by literary archaeologist, Theodore Mathieson. It also helped Mathieson has more than one impossible crime story to his credit. So you can probably guess what brought me back to the series.

"Omar Khayyam, Detective" was originally published in the February, 1960, issue of Ellery Queen's Mystery Magazine and takes place over 900 years ago in the Seljuk Empire.

Omar Khayyam was a Persian astronomer, mathematician and poet who garnered the patronage of the Sultan, Malik Shah, through his childhood friend and current Vizier, Nizam al Mulk. The story opens with Malik Shah summoning the astrologer with a request to talk to his Vizier, who's terribly afraid of something and has locked himself away in a turret room, but only tells Omar why he's fearful of his life. Rahim Zaid is the leader of the Assassins, "a fanatical, murderous group of revolutionaries," who's believed to possess magical powers "to be in two places at once" or "walk through stone walls." He has a cast-iron grip on his minions as he's the only one who can supply them with hashish. Nizam had ordered the execution of Zaid's only son and has reasons to believe he's already within the palace. So the Vizier stays behind the heavy, iron-bound and bolted door of his turret room with guards posted outside.

During a performance in the courtyard, the Sultan and Omar witness Nizam in the turret window, "as if struggling with some unseen assailant," before plunging down to the broad stone passageway below the level of the court – a foot-long dagger stuck out of his back. But when they break down the door, no murderer is waiting for them inside! Only a dying message Nizam had circled with wine in a copy of the Rubáiyát. Omar not only has to figure out who killed his friend and how, but he has a three-day deadline to do so. Malik Shah says to Omar, "bring me proof, star-gazer, that the murder was not committed by magic" or he will be exiled.

On a historical side note, I remembered having read something once about proto-detective stories from the Middle East and a quick search did turn up an interesting result. What I remembered turned out to be correct. The earliest known example is "The Three Apples," from One Thousand and One Nights, in which the Sultan orders his Vizier to solve a murder within three days "or be executed if he fails his assignment." So you can say early Arabic detective stories were more like the hardboiled private eye tales of Raymond Chandler and Dashiell Hammett, while ancient Chinese mysteries represented a more traditional style. The more things change, I guess. :)

Anyway, Omar's handling is not without interest and experiments with the drugs to understand what the Assassins experience under the influence of hashish, which recalls M.P. Shiel's Prince Zaleski (1895) and Joseph B. Carr's The Man With Bated Breath (1934). But the presence of drugs in combination with the setup of the locked room problem had me worried. There's a prosperously bad type of solution to the problem of a murderer vanishing from a locked room in which the victim is slipped a hallucinogenic substance and (accidentally) gets killed during a fit of madness. Somehow that solution has turned up more than once in my locked room reading and the setup would have allowed for it.

Fortunately, Mathieson had something a little better and more traditional in store, but the overall solution, while good in theory, is not entirely spotless and you can write that down mostly to (ROT13) gur cerfrapr bs gbb znal nppbzcyvprf – even though the story (sort of) accounts for it. But it comes across as cheap, needlessly complicated trickery. There are two other aspects of the solution that raised an eyebrow. Firstly, it was extremely risky (more ROT13) gb unir bar-unys bs gur gevpx eryl ba gur cebzvfr bs na rgreany, qeht-vaqhprq cnenqvfr gb gur nqqvpgrq snxr ivpgvz va beqre gb znxr uvz pbzzvg fhvpvqr. Secondly, why did nobody notice (even more ROT13) gung Avmnz'f obql qvqa'g fubj nal fvtaf be jbhaqf lbh jbhyq rkcrpg gb svaq ba n obql gung jnf guebja bhg bs n gbjre gb n fgbar cngu orybj. Even back then that must have stood out, right?!

So, despite my misgivings about the plot, I actually did enjoy reading the story. Mathieson was a better storyteller than plotter and you should approach this series as historical fiction dressed up as detective stories. But, purely as a plotter, he can be very frustrating to the plot-technical (locked room) mystery reader.