"I suppose that its influence is physically a bad one. I find it, however, so transcendently stimulating and clarifying to the mind that its secondary action is a matter of small moment."
- Sherlock Holmes (Sign of Four, 1890)

You might recall that, back in early April, I reviewed W. Shepard Pleasants' interesting, but problematic, The Stingaree Murders (1932), which wrung out an unusual and pleasing (pardon the pun with malice aforethought) story from the premise of a host of people cut-off from the outside world – with an apparent invisible killer picking them off one-by-one. If judged only on originality, Pleasants' book should be among the more better known locked room novels, if only for the sheer audacity of the last of three miraculous occurrences that he strung together, but the uncouth racial attitude of the characters is what probably kept this book away from the printers for a reissue. 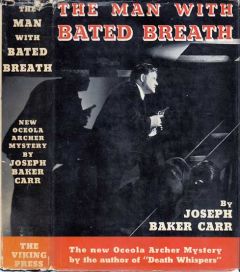 I met with a similar problem when leisurely strolling through Joseph Baker Carr's The Man With Bated Breath (1934), a story as disentangled from the shackles of reality as Hake Talbot's Rim of the Pit (1944) and Theodore Roscoe's Murder on the Way! (1935), set at the family plantation of the Gobelin clan in Georgia where a whiff of old southern racism lingers in the air. The Man With Bated Breath is not of the same caliber in reputation or content as the two novels mentioned here before, however, it could've made a name for itself as a marijuana-induced premonition of John Dickson Carr's The Hollow Man (1935) – including a two-chapter scene as memorable as the locked room lecture entitled "The Sin Party" and "The Sin Party, Continued." But more on that later.

Like his namesake would've done, Joseph Carr picked a young hero, named Frederick "Freddie" Carewe, as one of the central characters who's en route to Lookinghaven plantation, where he's to don the chauffeur's pet for his new employer, but before he can ring the doorbell he is confronted with a gun-toting dame and the body of a man. The woman turns out to be Marigold Theby, a relative of the Gobelin's, who stumbled across their dead lawyer. It's a death that, at first, does not seem to matter to the family, because the inoffensive man was, more or less, an outsider without an enemy in the world and they regard the affair as unpleasant intrusion from outside, but they remain unshaken throughout the story and one should not expect too much from this mystery in the characterization department.

The authors intent was writing a proper detective story and made few, if any, excuses in the execution of that plan – like turning Carewe into Ruper Carnal's unofficial sidekick. Just so he can be there when Carnal, who represents the local law, examines the half obliterated mud print of a face and questions Gil Gobelin on his unexplainable fit of laughter. It's just more fun to have Watson, but when that same Gil calls in a private detective the plot slowly begins to resemble the landscape of a John Dickson Carr novel.

Ocealo Archer is a gargantuan detective with an insatiable appetite (I also considered to title this post The Hungry Goblin or Feed Me More) and the demeanor of a jolly Santa Claus, but still waters run deep and underestimating him is a fatal error. Sounds familiar? I made a similar assumption, but you have to read the ending of this book to realize how different Archer and Fell really are. But I’ll say this, if this book was published a decade later, nothing could’ve convinced me that it was not written a conscious mock parody of John Dickson Carr and Dr. Gideon Fell. Nothing! Oh, there's also a jewel merchant, Waldemar de Windt, there to purchase a jewel knowns as the "Pekinese," who sets himself up as a rival detective – playing the Simon Brimmer to other detectives Ellery Queen. 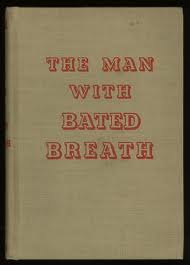 Anyway, everyone knows that the presence of a great detective does not prevent a murderer from striking again. On the contrary, killers are drawn to them like a moth to a flame and this nefarious person deserves bonus points for efforts. One of the rooms in the plantation is a disused, empty gable-room that becomes the source of a crashing noise that everyone, immediately, responds to. Four of the family members make it into the room, after which they got locked in, followed by gunfire. There's an open window, but a policeman below on the grounds closely guards that one. When they enter the room bodies are scattered in the four corners of the room: two of them are dead and the others are (severely) wounded. The room is as bare of furniture as it's of hiding places for a smoking gun, however, none turns up and the two survivors were physically incapable of making it vanish. Not to mention that the policeman swears nothing was dropped from or thrown out of the window and the victims were in such a position that it eliminates the possibility of a sniper.

The solution is up to scratch though not with the vivacity of the original Carr (and the murderer was easy to spot), but you have to give this one props for pulling off the vanishing murder weapon convincingly, which seems to be harder than it appears. I find them to be very hit-or-miss. Ellery Queen's The American Gun Mystery (1933) should've been one of the more famous novels from their earlier period, where it not for the botched and unconvincing explanation for the dissolving gun, while John Dickson Carr probably came up with one of the best and most simple answers in one of his stage play, "Inspector Silence Takes the Air," collected in 13 to the Gallows (2008). A willingness to fairly dispense clues also helps in overlooking some of its shortcomings. One of the worst may just be that Carr neglected to weave the family story of one of their ancestor, Mordecai Gobelin, who was hanged as a highwayman, done to replenish the family fortune, with the abandoned gable-room. A ghost of a condemned highwayman would’ve been the finishing touch and betrays that this is not a work from the hand of the real grandmaster of the locked room mystery.

By the way, I think the method would be perfect for one of Paul Doherty's Sir Hugh Corbett stories and it would be a lot more convincing in a medieval setting. If you know the solution, imagine it being done in a sealed, snow covered tower with a vast expense of unbroken snow surrounding it. Perfect!


Then we come to the "Sin Party," a gathering similar to Dr. Fell's "Locked Room Lecture," except that Archer deals out marijuana cigarettes to stimulate the mind and gives a defense for its use, but not before getting a lengthy description of its effect on poor Freddie. What a great take on the wool gathering technique of the armchair detective, but it has made me very suspicious of Nero Wolfe's appetite and his insistency on privacy when he's up with Theo on the rooftop greenhouse. And remember Rex Stout's remark about rolling their own? A Freudian slip of the tongue, as they say? If you eliminate the impossible, whatever remains, however improbable, must be the truth and I think the truth is that Wolfe's greenhouse is the most exclusive coffee shop in the world.

Well, I have to leave you at that and recommend this book to collectors of alternative crime novels, fans of John Dickson Carr who want to read it for comparison, and locked room enthusiasts like me, but let the read be warned, the book may tax some readers sensibility as much as their deductive abilities. But remember, we came a long way since this book was written and this kind of old-fashioned racism should be taken as seriously as John Cleese goose-stepping in Fawlty Towers.