Message in a Bottle

"Everything has a beginning and an end. Life is just a cycle of starts and stops. There are ends we don't desire, but they're inevitable, we have to face them. It's what being human is all about."
- Jet Black (Cowboy Bebop)

First of all, I want to beg your forgiveness for indulging, three times in the span of four weeks, in those pesky, untranslated detective stories, but Cor Docter has captured my fascination and this review will round out the trilogy of books featuring Commissioner Daan Vissering – a kind and intelligent policeman. Even more good news, I have in my possession a little known, disregarded locked room mystery from the 1930s and it's up next, but for the time being, bear with me as I babble about one more of these books.

Now that I have read all three volumes in this series, I understand what Docter set-out to do with them and it's an effort that I very much appreciate: Droeve poedel in Delfshaven (Melancholic Poodle in Delfshaven, 1970) was a Grand Whodunit in the tradition of Agatha Christie, Koude vrouw in Kralingen (Cold Woman in Kralingen, 1970) re-opened John Dickson Carr's beloved Locked Room Mystery for business and Rein geheim op rijksweg 13 (Pure Secrecy on Highway 13, 1971) mimics the signature trademark of Ellery Queen, the Dying Message. However, as mentioned before in these reviews, they're hardly throwbacks, but more of an overhaul that resettles them in the modern world of the early 1970s – populated with mostly working and lower class people who are caught in the meshes of intrigue. 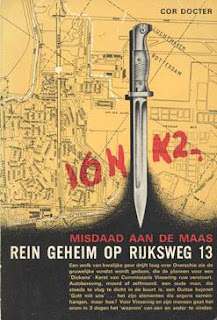 Highway 13 was one of the busiest highways of the country and there’s always someone traveling down that road, no matter what hour of the day it is, which makes the plan of two petty thieves, Sander Wils and Peter Ruivenvoorde, all the more audacious. They want to strip a delivery van, abandoned on the emergency lane, of its valuable parts, but what they find in the back of the car throws a spoke in their wheels: slumped between scattered protest signs there’s the body of a man, hit over the head, and one hand resting in an open canister of red paint. On the inside of the van the dying man had scrawled "16NK2-" and it’s definitely a sign that Vissering's plan for Charles Dickens-style Christmas is in jeopardy. The scene of the crime also provided me with the post title, because the stranded van, containing the dead man's message, reminded me of a bottle that had just drifted on shore after an exhausting journey – with the lights and sound of passing cars standing in for the murmur of the sea and a cone of light from a nearby lighthouse. I thought it was an interesting image.

The thorough investigation of Vissering and his men uncover a number of plot threads that run in various directions, but still appear to be connected to the body in the van. There are the signs protesting the pollution of the air with garish slogans and this turns up a second death, a suicide of the wife of one of the members of a protest group, and a glass of diluted bleach is one of the key clues in this little side puzzle. You need a piece of trivial, household knowledge from this particular period to completely solve it, but it's actually quite clever and could've easily been used to give a satisfying explanation to a locked room scenario that turns out to be nothing more than a simple suicide. Docter only had to let Ella van der Klup jump from an open window inside her locked apartment, instead from the gallery outside, with her husband snoozing in the other room.

Vissering also has to tangle with "Boere-Bram," a Lombard, of sorts, of scrap metal and junk, who has a link with the murdered man, who turns out to be the straight up brother of a convicted criminal who has stashed away his loot, hundred fifty thousand guilders, as a nest egg for when he gets out – which is sooner than everyone expected! There’s also an old, mysterious man, named Siem Bijl, bumping into Vissering wherever the investigation takes him and a German bayonet is also thrust into the case. As to be expected by now, Docter pulls off a conclusion as classical as it's satisfying. It's like the back blurb said, "This time no Carter Dickson effects, but 'keys' that are reminiscent of the best plots of Ellery Queen, Peter Quentin (sic) or the immortal Dorothy Sayers.”

Lastly, I should mention that Pure Secrecy is also very strong in its commentary on modern society and its condemnation of the annexation of Overschie by Rotterdam – polluted and defaced in the process. Highway 13 was carved right through it and "housing barracks" (i.e. flats) tore the old atmosphere and community asunder. Docter already warned and apologized in his introduction that his description of the then present-day Overschie would be a very colored one – because the old Overschie was very dear to his heart.

Docter's detective novels may be steeped in old traditions, but he made a valiant effort at updating them to modern times and, more often than not, succeeded in doing so and this  earned himself a place among the ranks of post-GAD writers who proved the old adage that a classic never goes out of style.
Geplaatst door TomCat on 9/29/2012