"Everywhere, as he knew, there were husbands and lovers who cherished the scars of their boyhood and who lived like dreamers in a world of reality."
- Dr. Eustace Hailey (The Red Scar, 1928)

Robert McNair Wilson, a Scottish physician, wrote a score of mystery novels, under the assumed name of "Anthony Wynne," during the first half of the twentieth century and his series detective, Dr. Eustace Hailey, preferred Occam's Razor over a lancet to dissect a miracle problem.

Dr. Hailey is a specialist on the human mind, who constantly plunders his snuffbox and acts as an unofficial consultant when a case is taking on all the appearances of a mystifying, storybook crime – investigated and solved by the likes of Sherlock Holmes and Father Brown. Over a dozen of these recorded cases involves murderers who defied more than just man made laws as they left their victims behind the sturdy doors of locked rooms or struck them down in front of witnesses, while appearing to be completely invisible! Naturally, this penchant for locked rooms attracted my attention and last year I had an opportunity to sample two of his novels, The Silver Scale Mystery (1931) and The Green Knife (1932), and expected The Red Scar (1928) to be more of the same, but this one can hardly be compared, in any shape or form, to the previous entries I have read. 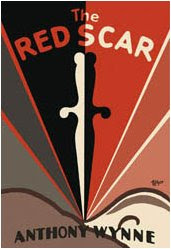 For one thing, The Red Scar hardly qualifies as a locked room mystery and the impossible situation described in Robert Adey's Locked Room Murders and Other Impossible Crimes (1991) is a semi-impossible at best and not even the focus of the plot. Heck, the only references to locked doors and impenetrable walls were allusions to a prison facility. But even more interesting was that it read like a masculine take on Agatha Christie's Eternal Triangle and more. It riffs on an old cliché, pulls a least likely suspect and a serious attempt is made at a surprise twist, but an alert and knowledgeable reader can anticipate a few of the surprises.

The plot of The Red Scar revolves around a small cluster of people, who, in turn, revolve around Raoul Featherstone – a painter with an insatiable appetite for women. The other players include the sculptor Alaistar Diarmid, his cousin Phyllis and her husband, Major Lionel Leyland, and the beautiful Echo Wildermere. You guessed it, both women are involved with Raoul, much to the chagrin of both gentlemen, and before long a tragedy unfolds in the artist's studio and the aftermath muddles the water considerably. Raoul is mortally wounded with a knife, Lionel is beaten up and Echo's clothes are torn and drenched in blood. Raoul’s body disappears under Alistair’s nose, when he attempts to cover-up the crime in order to protect Echo. A tangled mess that Hailey has to unsnarl, however, keeping his head is more of a trial than keeping it cool.

There's a decidedly hardboiled slate to this story with a lot a physical altercations and Dr. Hailey gets the brunt of it, but that's all I can tell without spoiling any of the fun.

Anyway, Raoul's charred remains are eventually retrieved from a burned out car, halfway through the story, and two people are charged and placed in the dock to answer for a murder they might not have committed. Dr. Hailey is convinced that there's more to the case and continues his investigation as well as a race against the clock, which had a good touch of suspense. I have to admit, though, that I was skeptical at first and feared one of his overly melodramatic finals, but he efficiently tied everything together with a sobering explanation. In my review of The Green Knife, I mentioned that Wynne read like a writer who arrived on the scene thirty to forty years too late, but here it felt like he was a few years ahead of time – looking back on the detective stories from the past twenty years or so. At least, that’s the impression I got from the book and the solution. Minus the satire, of course.

I have to mention one downside and that’s fluctuating quality of the writing, but then again, that might just have been my fractured reading of the book. All in all, this just might be a more accomplished detective story than The Silver Scale Mystery, in spite of lacking an ingenious contrived locked room trick, and a better novel overall than you would expect from a writer often criticized for his overwrought writing and cardboard characters.