"You had those typical neighborhood murder cases, with the remarkable intimacy of a John Dickson Carr story or Agatha Christie's train murder... This seemed such a closed ward murder, bound to the invisible walls of the rayon."
- Commissioner Daan Vissering (Droeve poedel in Delfshaven, 1970)

Earlier this month, I reviewed Koude vrouw in Kralingen (Cold Woman in Kralingen, 1970) by Cor Docter, a pulp writer who had a trilogy of full-fledged detective novels to his credit that merged the style of the Dutch topographical police story with the type of fantastic plots usually found in the most imaginative works of John Dickson Carr and Ellery Queen, and flung in an seemingly impossible situation for good measure. Needless to say, I was intrigued, even if some parts of the solution gave pause for thought, and now I feel even more drawn to his work after finishing Droeve poedel in Delfshaven (Melancholic Poodle in Delfshaven, 1970). 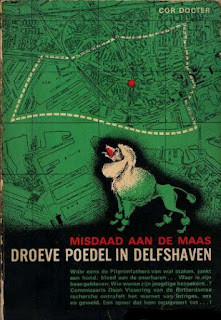 Melancholic Poodle in Delfshaven opens with the muffled howls of a dog, muzzle smeared with blood and a trail of identical substance leading to the doorsteps of a house abandoned by its owner. Commissioner Daan Vissering is holding the leash of the investigation and he and his team begin to sniff around for clues.

The missing homeowner is one Gerrit Vledser, a shady moneylender, who, according to the evidence, was hit over the head with the dog’s food bowl – before he was either taken away or fled from his attacker(s). They find a hand drawn map, with markings, and Vissering drags information from the neighbor that includes shreds of a heated conversation, the time Vledser may have been hit and two young men who associated with him. More than enough to go on, but other problems are emerging that ask for the commissioner's attention.

Exploding fireworks cloak the statue of Admiral Piet Hein in smoke, noise and confusion. Somewhere else, an exploding smoke bomb has the same effect. Senseless pranks or is there a darker meaning? Vissering has his own thoughts about it and suspects a connection, which is confirmed when the young men turn up and knock one of his men, Grijphand, into the hospital. And before long, Vledser turns up again. Behind the statue of Van 't Hoff. His head caved in... again!

Melancholic Poodle progresses in the same, absolutely delightful, way as Cold Woman, thickening the plot with each succeeding chapter, however, I found this to be less of a throwback than the other one – which dribbed with the influences from Anthony Abbot, John Dickson Carr and S.S. van Dine. Not that I have any complaints about that, but the publisher advertised this series as classic detective stories reinvented and this book definitely felt like it delivered on that promise.

There was, for one, more emphasize on characters, or, at least, a series of interesting character portraits. One of them told the story of one of those many, and often forgotten, tragedies from the war, but even more interesting was the back story of Grijphand. Docter only needed a few pages to make you understand what made that man tick instead of drawing those events from his youth out over a couple of hundred pages. It was just a pleasant balance between plot and character. Although, there may have been a tad bit more plot than character.

The plot unfolds at a slow, methodical pace, peppered with a suspenseful wrap-up of one of their problems, before the murderer is confronted in a classic denouement and receives a lecture from Vissering on the Chesterton-effect – which is nothing short of brilliant. Yes. The identity of the murderer is a revelation in the best GAD tradition, but with a decidedly modern touch.

Docter showed a skillful hand at tying all the plot threads together and make it logically click on every layer of the story. All in all, a very fun and clever detective story to read.
Geplaatst door TomCat on 9/17/2012