A Plan of Attack

"You stand in the way not merely of an individual, but of a mighty organization, the full extent of which you, with all your cleverness, have been unable to realize."
- Professor Moriarty (Sir Arthur Conan Doyle's "The Final Problem," from The Memoirs of Sherlock Holmes, 1894)

Yes, I know. I know. I allowed way too much time to pass between this blog-post and my last review of Case Closed, which dates back to late August of 2016, but here we are again with, perhaps, the most important volume in the series and the plot heavily involves the black-clad men from the crime syndicate – known as the Black Organization. A volume jam-packed with revelations and progress in the main story-line that runs like a red-thread through the entire series!

The 58th volume of Case Closed, known in some quarters as Detective Conan, is basically a novel-length story. 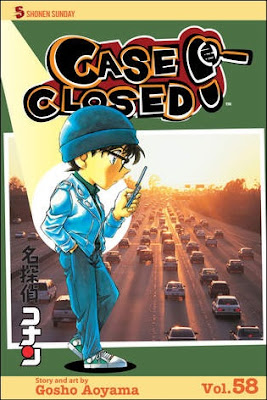 Traditionally, this volume begins where the previous one ended: Rena Mizunashi is still in the hospital, closely guarded, but an operative from the syndicate has infiltrated the hospital and is posing as a patient. So the last volume saw Conan assisting the FBI with ferreting the agent from a group of three patients, which he accomplished by tricking each of them in picking up his cell phone from the floor. However, Conan's discovery triggered a large-scale battle-of-wits between the FBI and the Black Organization. Both groups have some very familiar faces on their team.

In the corner of the FBI, there's the head of the operation against the syndicate, James Black, who is accompanied by Jodie Sterling and Shuichi Akai – considered by the Organization to be their most dangerous opponent and refer to him as the "Silver Bullet." Gin even mentions to Vodka and Vermouth that "he's got The Boss shaking." Akai's longstanding feud with the Organization yields some very interesting revelations, harking all the way back to a case from the second volume, but Eisuke Hondo also learns the truth about his father and sister. And how all of that relates to Rena Mizunashi. So this volume definitely provides some answers to the overarching story-line of the series.

On the opposing side are the aforementioned syndicate agents, Gin, Vodka and Vermouth, who are backed up by a pair motor-riding snipers, Chianti and Korn. They pose a tricky challenge to Conan and the FBI agents in the hospital, because they're effectively trapped there with no apparent way of getting Mizunashi out of there. James Black points out that one wrong move on their side might result in them having to effect an escape "through a hail of bullets."

So this quickly moves in an almost city-wide game of cat-and-mouse between the Black Organization and the FBI, in which the former seems to have the upper-hand over the latter – flooding the hospital with compact time-bombs and patients of several catastrophes they created in the city. I won't give further details about this dangerous mental tango between both parties, but the result is, what I dubbed, a "Strategic Detective." A series such as Spiral: The Bonds of Reasoning is good example of a "Strategic Detective," but a better comparison, for the readers of this blog, would probably be the scheme Nero Wolfe cooked up in Rex Stout's The Doorbell Rang (1965) to ensnare a bunch of corrupt FBI agents. It makes for a very good, fun and captivating read!

The last four chapters seems to ease the volume back in the normal pattern and rhythm of the series, which begins when Conan and the Junior Detective League bump into Police-Detective Takagi at a hotel where they were eating lunch – learning from him that a murder has just been discovered there. Apparently, the head of a foreign agency was murdered in his office, on the 39th floor, "shot several times in the chest" and evidence suggests the gunman is still in the vicinity.

Three foreigners, who speak perfectly Japanese, turn out to be the main suspects, but one of them was a character introduced in the previous chapters: Agent André Camel of the FBI! So this minor murder case is a convenient excuse to tell Camel's back-story, but the Black Organization also rears its head. One of their operatives, Kir, has received orders to kill Akai and a body cam/wire allow Gin and Vodka to watch the whole show. The volume ends with a cliffhanger when Akai is shot.

Oh, the murder case, in which Camel became a suspect, was typical for an Aoyama story that involved Western characters. The solution always hinges on language. Or a misunderstanding between two different languages (e.g. The Spider Mansion Murder Case from vol. 25).

While this was not a volume brimming with locked rooms, dying messages, code crackers and other kind of detective stories, this was still one of the more rewarding entries for long-time readers. You're finally getting some answers, but also because you finally got to see Conan getting involved in a serious tangle with the Black Organization. So this was welcome break from the regular pattern of the series and one that reminded why I love this series: it is, as another eloquent fan of the series so scholarly described it, a "superspecialawesome volume."

Well, since I'm already two volumes behind on the release schedule, I'll pick up the next volume from TBR-pile ASAP and then fetch those other two volumes. I might also do a blog-post about my favorite locked room mysteries from the series. But that's something for the coming weeks. Stay tuned!
Geplaatst door TomCat on 1/15/2017