"It is the unofficial force – the Baker Street Irregulars."
- Sherlock Holmes (Sir Arthur Conan Doyle's The Sign of Four, 1890)

Manly Wade Wellman was an old-fashioned "fictioneer," known in some quarters as "the dean of fantasy writers," but he also wrote detective stories, science-fiction, westerns and juvenile fiction. A versatile writer whose bibliography encompasses a wide sweep of (sub) genres and this is reflected in the two books and short story reviewed on this blog, which comprises of a hybrid-mystery (Devil's Planet, 1942), a private-eye novel (Find My Killer, 1947) and an impossible crime story - "A Knife Between Brothers" collected in The Black Lizard Big Book of Locked-Room Mysteries (2014).

The subject of this blog-post is one of Wellman's lesser-known novels, which, once again, belongs to a completely different sub-genre than his previously reviewed work. One that can be placed in the category of juvenile mysteries, but also, very snugly, fits into the niche corner of boy scout fiction and scouting literature in general. A peculiar field of fiction now only of apparent interest to collectors. 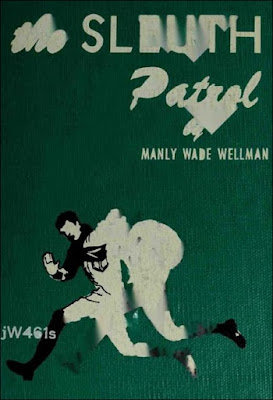 Holmes "Sherlock" Hamilton is the sixteen-year-old protagonist of The Sleuth Patrol (1947) and the son of the police chief of Hillwood, who wants to follow in his father's footsteps, but for the moment he's still in the scouts and the opening of the book finds him in his basement den – one that resembles "an outlaw hide-out." The walls are decorated with crossed fencing foils, a couple of grim looking "Most Wanted" posters and tacked-up certificates of Scout achievements. A corner table functions as forensic laboratory were fingerprints can be taken with ink, ground pencil lead or white talcum.

Sherlock is eager to help his father, who's also the chairman of the Troop committee, by using his den as a gathering place for the formation of a new Troop. A handful of boys show up: Pete Criley, Harry McMurray and Chuck Schaefer (who reads Ellery Queen), but the three Scouts taking center-stage are Sherlock, "Doc" John Watson and the wisecracking Max Hinkel. So this makes the book really feel like a predecessor of Robert Arthur's The Three Investigators.

One thing this group of boys have in common, besides being Scouts, is that they love detective stories ("we're all Hawkshaws at heart"), which makes it a logical decision to become Scout Detectives. They call their newly formed patrol the (sleuth) Hounds. The second chapter, entitled "The Case of the Bean Burglar," provides Sherlock with his opportunity to shine and quickly solves the case, but his interference will come back to haunt the young detective. A month later, during a school holiday, their Scoutmaster takes them on an outdoors camping trip and this provides the Hound Patrol with a number of problems and challenges – from a friendly rival with the Eagle Patrol to a rundown, reputedly haunted, house in the middle of the woods.

First of all, the car of the Assistant Scoutmaster, Mr. Brimmer, disappears in the middle of the night and this provides the plot with a borderline impossible theft, because how was the (noisy) car started without anyone waking up? Why did they fail to find any of the tracks with the distinctive zigzag pattern? I should probably have tagged this blog-post as an impossible crime, but this was really a slight and easily solvable problem without any real emphasis on the apparent impossibility of the situation. To be honest, the entire plot, what they call, waver thin and relies heavily on the Scouts showcasing their physical-and mental prowess to solve problems and get out of tight situations. A part of the middle section tells of a competition between the Hounds and Eagles, which, for example, showed them using their wits to try and win a swimming race.

I was strangely reminded of Spiral: The Bonds of Reasoning, both the manga and animated series, which also had physical battle-of-wits and logical (survivor) games. Of course, they were a whole lot less deadly in The Sleuth Patrol, but they're definitely related. And, yes, the combination of the camping trip and the criminal angle of the abandoned house in the woods recalls some of the disastrous camping trips of the Junior Detective League from Case Closed (a.k.a. Detective Conan).

But the plot-thread of the haunted house, tied to both the burglary from the second chapter and the car theft, is far from complex and only gives Sherlock an opportunity to showcase his skill set when he finds himself trap at the place – alongside a couple of gun-toting criminals. I got the impression this book was written with the idea of showing young teenagers the advances of taking their homework and physical exercises seriously. For example, when Sherlock finds himself trapped in the dark cellar he deduces, using math, that "the basement of the haunted house was a deep one," once inch short of ten feet, by simply counting the number of stairs and estimating their height. He also showed how his physical fitness allowed him to sneak around the criminals and escape from their clutches unscathed.

So the book really is closer to adventure stories and boy scout fiction than to the juvenile mysteries of The Three Investigators.

Finally, The Sleuth Patrol ends with an interesting and somewhat unique event, in which hundreds of Scouts, from different groups, are summoned to help the police comb the swamp for a wounded man. So you can also view the book as a recruitment tool for the Scouts, because Wellman painted an attractive and exciting picture of the life of Scouts. Even if you eliminated the presence of the criminals. It reminded me of the traditional school-camp droppings. So one can only imagine how attractive this must have looked to children and (young) teenagers from the pre-1950s (i.e. last generations before TV-and internet).

So, plot-wise, The Sleuth Patrol is a very thin detective story, but still a well-written and fun read, which told a boy scout story on top of the premise of a juvenile mystery. Admittedly, that was not entirely without interest. Probably not to everyone's taste, but worth a shot to readers of juvenile (mystery) fiction.
Geplaatst door TomCat on 1/11/2017