"But knowing you boys, nothing would surprise me – not even your finding treasure where there isn't any."
- Mr. Crenshaw (Robert Arthur's The Secret of Skeleton Island, 1966)

The Mystery of the Laughing Shadow (1969) is the twelfth recorded case of those three young lads, Jupiter "Jupe" Jones, Pete Crenshaw and Bob Andrews, who established themselves as The Three Investigators in their native stomping ground of Rocky Beach, California – where cases are (literally) for the picking. And this entry in the series is a case in point.

It was the second novel penned by Robert Arthur's handpicked successor, Dennis Lynd, who adopted the penname of "William Arden" for this series, which first appeared on the book-cover of The Mystery of the Moaning Cave (1968). He also put this name to one of the most classically-styled case for the three detectives, The Mystery of the Shrinking House (1972). However, the book under review today is more of an adventurous yarn, with criminal elements and long-lost treasure, than a proper detective story. One that was practically thrown into their laps. 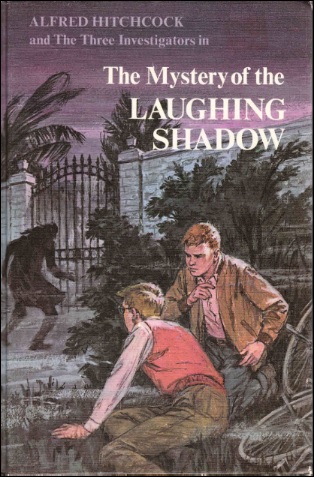 Bob and Pete are pedaling home on their bicycles, after spending a day in the mountains, when they pass the high wall enclosing the Sandow estate and are startled by a sudden cry, "HELP," coming out of the night – followed by an object being thrown over the enclosure. They hear several voices and eventually a shadowy figure emerges from the iron gate in the wall: a "tall, twisted and humpbacked" entity with "a long, beaky nose and a small head" that "jerked about in an erratic way." A wild laughter came from the tall figure and this unnerved the boys.

They observed all of this from a thick growth of bushes near the wall and high-tailed out of their once the gate closed behind the laughing shadow.

Jupe was unable to accompany his friends on their mountain excursion, because he had to work in his Uncle Titus salvage yard, but "the stocky First Investigator of the trio" makes up for lost time by finding a hidden compartment in the amulet that was thrown over the wall. The amulet is a golden figurine of a sitting Indian with a feathered headdress and a hidden compartment in the bottom contained a small of piece of paper, which was covered in strange writing and the ink looked as if it might be blood!

Their famous mentor and promoter, Alfred Hitchcock, referred them to a friend of his, Professor Meeker, who's an expert in American-Indian languages and from him they learn about "a mystery that is almost two hundred years old" - namely the long sought after Chumash Hoard. Between 1790 and 1820, the Spanish were trying to cope with a dangerous band of marauding Indians, the Chumash, who were given gold to leave the settlers alone. By the time they were finally beaten, they reputedly hoarded a King's ransom worth of gold, but their last leader, before dying, only hinted that "it is in the eye of the sky where no man can find it." So how's that for a dying message?

However, the truly baffling part is that the writing, in blood, they found inside the amulet was Yaquali, which is the language of a Mexican-based tribe, known as the Devils of the Cliff, who have "a long record of shunning civilization." So that makes for a nice historical mystery, but the problem for the trio began en route to the home of the professor. A dark man in white, brandishing "a long, wicked-looking knife," took the amulet from them. Dark men in white, carrying knives, are constantly roaming in the background of the story, but they're not the only ones posing problems and potential dangers to the boys.

Jupe, Pete and Bob want to snoop around the Sandow estate, which belongs to the reclusive Sarah Sandow, but before they can piece together a plan one of her relatives turns up at the Salvage Yard. A young boy, named Ted Sandow, who tells them he's staying with his Great-Aunt Sarah and she has barn full of a old junk from years ago – which she wants to dispose of. But what worries the boys is that Ted got to them through their arch-nemesis, "Skinny" Norris. There's also a friend of Sarah Sandow, one Mr. Harris, who is the president of the local Vegetarian League and was attacked during a lecture by the previously mentioned knife-wielding victims. 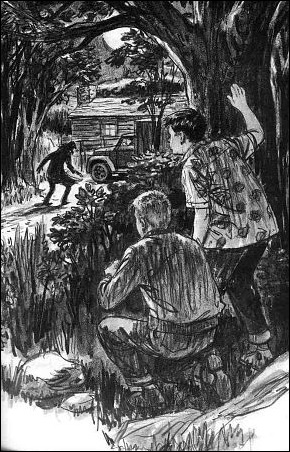 So, all of this, provides more than enough trouble for the trio and they find themselves in a number of tight spots, like getting locked up inside an empty house, which for a fun, fast-paced and very quick read. The fact that this is not as much of a mystery novel, like The Mystery of the Whispering Mummy (1965) and the previously mentioned The Mystery of the Shrinking House, makes it easier to forgive some of its spots.

One of biggest weak spots was pointed out and mocked by the "Puzzle Doctor." He reviewed the book, exactly one year ago (!), pointed out (and spoiled) the ridiculous explanation for the misshapen, laughing shadow Bob and Pete saw in the opening chapter. Even for a novel geared towards younger readers it was a bit, uhm, silly. I appreciated a famous detective story was used as, sort of, a clue, but that part of the plot was hilariously bad.

Speaking of clues, Jupe and Pete see the laughing shadow in front of a lodge, inside the Sandow estate, where they witness how the figure ushers, what appears to be, four small figures through the front-door – none of them seems to have a head! The answer to this is pretty simple, but relevant to the treasure hunt and made for a nice little set-piece.

Some parts of the ending can be, as said before, rather silly, but the only real problem I had was with the hiding place for the hoard of gold, which makes you wonder why nobody bothered to look there. I mean, there's a local legend of an Indian treasure and hints referring to "the eye of the sky." Yet nobody, locally, thought to take a look there? You know, the culprit was right: most people there must have been "stupid" or "the Chumash Hoard would have been found long ago."

So, yes, a very quick, fun and amusing read, but, plot-wise, not one of the strongest or cleverest story in the series. As a consequence, I can only really recommend The Mystery of the Laughing Shadow to readers who already enjoy tagging along with The Three Investigators (i.e. fans of the series). Otherwise, I would recommend looking for one of the other titles mentioned (and praised) in this blog-post.
Geplaatst door TomCat on 1/04/2017