"I could murder that woman... she treats us like muck."

Alfred Meyers was, like Anthony Boucher, "a great opera buff" and snatched at any opportunity to sing "in every chorus that would use his talents," while working off and on in his father's bank, but Meyers also achieved modest success as a writer – publishing short stories, a stage play and a detective novel.

Murder Ends the Song (1941) was Meyers' sole contribution to the genre, but, despite his scanty resume, he was elected the first Treasurer of the Northern California chapter of the Mystery Writers of America. A chapter of which Lenore Glen Offord was Secretary and Boucher was its Vice President. Meyers would go on to write only a single chapter for an anthology of true crime stories, San Francisco Murders (1947), before fading from the public-eye and his work was hurled into obscurity. 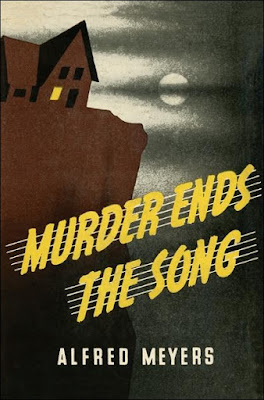 There it was, after seven decades, found by one of the usual suspects, Curt Evans, who reviewed the book in early 2013 and in his two-part post (here and here) called it "a work worthy of the masters" that "merits reprinting" - which finally happened in 2015. A small, independent publisher, Coachwhip, reissued the book with an introduction by Evans, which is a compendium of his blog-posts on Meyers. It also, enticingly, points out that the book contains several illustrations, a floor plan and a tabulations of clues. Showing that Meyers was dedicated to playing the game fairly and resulted in "a most enjoyable classic mystery" composed "in the manner of the great Ellery Queen." And for the most part, I agree with this assessment.

Murder Ends the Song is told in the first person and the narrative voice is that of a promising young tenor, Anthony "Tony" Graine, who's a most amusing character and this is particularly shown in the opening chapter – when his business manager, "Nero," insistently rings his phone until he drags himself out of bed. The subsequent conversation was rife with verbal abuse, with one of them threatening to ram a telephone "down his yapping managerial gullet" and the other evoking "the curse of the Witch of Endor," but the manager won in the end. Graine collected himself and met with him ten minutes later to go to the airport to join the entourage of "La Grazie."

Marina Grazie was a star of the operatic stage, but, while her star had dimmed, her fame had not entirely faded. She was heard on the radio often and could still gather a crowd of newspaper reporters. However, to her dismay, she has been unable to set a toe on the big stage after prematurely retiring, hoping the famous managers would track her down with "a contract as fat as she was," which never happened – eventually giving and making a guest appearance on a radio program. Grazie wants more and joined the "one-horse outfit" of Nero in the hopes of making a West Coast comeback.

So, a typical spoiled diva with a high opinion of herself and was knocked down a peg, or two, by the world around her. However, the subsequent story "The Great Grazie" to be a truly villainous piece of work. A woman who has been described as "a grasping, egotistical, demanding slave-driver" and not adverse to abuse her authoritative position to physically assault the people around her. Graine quickly became aware that Grazie has "a gift for inspiring impulses to violence" and hears several references to her murder long before stumbling across her body. Someone even wrote a message in blood on her mirror! So someone has it out for her.

The entourage of the opera diva consists of the following people: Miss Elena Grazie (her niece), Miss Ambrosia Swisshome (companian-secretary), Dr. Beale Thorndyke (personal physician), Mr. Julian Porter (accompanist) and Mr. James Paris (chauffeur and pilot). They find themselves stranded, together with their tormentor, inside a grim, half-finished castle, called Lucifer's Pride, which was constructed by Grazie's dead fiance, Lucifer Bollman – an elderly Wheat King who, reputedly, died of a broken heart and now haunts the place.

Lucifer's Pride is "perched on a bluff some three hundred feet" above the Columbia River Gorge and a violent storm cuts the party off from the mainland for a full twenty-four hours, which is enough for the killer among them to dispatch a few people to Great Beyond. And this person begins with Marina Grazie.

After a confrontation between Grazie and her rebellious entourage, she takes possession of the library and repeatedly sings her favorite aria, Caro Nome, but when Graine goes to check on her he finds that the singing came from a phonograph in the corner – playing a ten-year-old recording. Grazie was slumped over the keys of the piano, her head resting in her arms, where she slumped to the floor when Graine touched her shoulders. A steel knitting needle protruded from the base of her skull!

So there you have it: the premise of a classically-styled mystery novel with a closed-circle of suspects, cut-off from the outside world, which is a clichéd situation often associated with detective stories from this period. However, Murder Ends the Song is everything but cliché or an unoriginal imitation of Agatha Christie's And Then There Were None (1939). Meyers allowed his character to perform a different kind of detective story on this stage and this resulted in some very well imagined set pieces.

One of them is how nobody, except for Graine, is really concerned about the murder and they find it more important to search the library and padding down the corpse(s). What are they looking? Graine suspects it is Lucifer diamond. After all, Grazie's jewelry box has been looted, but, obviously, the party is searching for something completely different. There was also a very bizarre musical scene, in which everyone had gathered in the library and was singing Shall We Gather At the River at the piano, while the body of Grazie was laying on the couch and tucked around with an Indian robe. It ended with the question whether it would have pleased the old bird. I was reminded of a similar and equally bizarre singing-scene from Boucher's The Case of the Seven Sneezes (1942). So the writing and story-telling were as inspired as the plot.

A plot further complicated with addition of two bodies. One of them belonging to an unknown man who broke his neck in a rather unpleasant fall and the third victim perished in a muddled shooting incident, but the main attraction of the story is the murder of Marina Grazie and the person responsible for her death.

Meyers did an exemplary job in plotting and writing a genuine whodunit. I was pleasantly surprised when it became apparent this person was the killer, because I had not seriously considered this option and experienced one of those rare, but pleasant, jolts of surprise that attracts readers to detective stories, but (admittedly) become rarer once you become well read in the genre. But this one did it. I also found the motive to be interesting and very original for the time. It may very well have been the first example of its kind.

So that aspect of the plot was definitely satisfying, but, like a tiresome nitpicker, I have to point out a strange, anomalous flaw in the solution. Meyers may have done too good a job at hiding the murderer, because the (main) clues do not, necessarily, point this person out as the only possible candidate to have committed the murders – which makes them more indicators than tell-tale clues. Well, there's the clue of the bottle, but that one veered closely to the territory of Dagmar Doubledick's tie. However, I guess the bottle clue can be seen as the connecting puzzle piece to the aforementioned indicators and together point towards the murderer.

I should also point out that the caretakers, Mr. and Mrs. Tait, withheld a key piece of information until the end. Granted, it was established early on in the story that they didn't always show the back of their tongue or "forgot" things, but still, it should have been divulged a whole lot sooner.

Anyhow, you should not allow this technical nitpicking to deter you from trying Murder Ends the Song, because it is a genuine and pleasantly surprising whodunit with an original background placed in a familiar setting. And it is a notable entry in the Van Dine-Queen School of Detection. I just found the effect of the clues on the overall plot to be a bit weird. But, again, that's just me nitpicking the finer details of a clever and enjoyable mystery novel.
Geplaatst door TomCat on 1/18/2017