"There are so many possibilities, and yet all of them seem wild and improbable."
- Tommy Beresford (Agatha Christie's "The House of Lurking Death," from Partners in Crime, 1929)

As you may have noticed, I've been abandoning the trail of obscurity to focus on the profusion of reprints, translations and even neo-orthodox mystery novels that are currently flooding our wish lists – hence why nearly every review over the past month was tagged as "Foreign Mysteries"and "Post-GAD."

Well, for reasons even I can't fathom, I neglected the publications from Locked Room International as well, which is an independent publisher of English translations of mainly French impossible crime novels. The owner and translator of Locked Room International, John Pugmire, has introduced many, interesting locked room mysteries to a non-French speaking audience and is currently still in the process of translating Paul Halter's work – one of the two biggest fanboys of John Dickson Carr on the European continent. 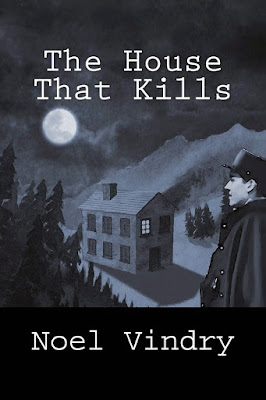 One of LRI's latest offerings is La Maison qui tue (The House That Kills, 1932) and was written by a former juge d'instruction (examining magistrate), Noel Vindry, who penned a dozen locked room mysteries between 1932 and 1937 – which all began with this book.

The House That Kills introduces Vindry's detective, Monsieur Allou, an examining magistrate "who could work without giving that impression," but goes on a holiday on page one and puts a younger colleague in charge. And it doesn't take long for a problem to present itself.

Pierre Louret shot and killed a knife-wielding vagrant in self-defense and a large sum of money found on the tramp's body suggests he may have been hired, instead of crazy, but the frightened Louret family is unwilling to show the police the skeletons in their cupboards – preferring to barricade themselves in their fortress-like home. The windows are barred or shuttered and the bedroom doors have a pair of heavy bolts, but even when the police are crawling around the premise they are unable to keep the menacing force out of the door.

A menace that may be bloody inheritance from the days of Pierre's father in the United States, which called to mind Sir Arthur Conan Doyle's The Valley of Fear (1914) and Joseph Bowen's The Man Without a Head (1933).

The results are two, seemingly impossible crimes and twice as many murders! The first victim is Pierre's sister, Germaine, who's found dead in her bedroom – clutching a smoking gun and a toppled chair with a knife-handle sticking out of her chest. As to be expected, the windows were secured from the insight and the bolts were drawn. The second impossibility occurs when another member of the family gets snuffed out when apparently nobody was around him.

The House That Kills has received some lukewarm reviews upon its release, but I can forgive wooden, human-shaped chess pieces or the lack of atmosphere in a (locked room) mystery... if the plot is any good or original. That's what was severely lacking in the first half. 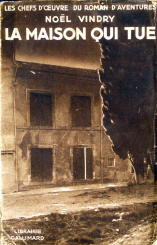 The murder in the locked bedroom was an audacious redressing of one of the oldest tricks in the book, but to pull it off as it was presented in this book would require a supernatural amount of luck and foresight – and only worked because the plot required it to work. Amazingly, I pictured the exact solution in my mind for the second impossibility and rejected it immediately, because it seemed silly. I think it would've been more convincing if it had been presented as a crime of opportunity, done in the spur of the moment, because the murderer seemed to be well versed in the Xanatos Gambit.

However, the second half has some points of interest that shows the promise worthy of the praise French mystery scholars give him. Firstly, Allou played god over life and death to collar the murderer in the act and that has consequences in the second half, which isn't a theme that's often explored in Golden Age mystery series – let alone in a debut novel. Of course, there's Speedy Death (1929) by Gladys Mitchell, but that's another story all together.

Secondly, there's a third, seemingly impossible crime in this portion and the solution to the nearly fatal shooting of Allou in his locked and watched apartment is original. I figured out how it was done, but only because it's very similar to favorite short story of mine from the late 1930s. However, Vindry seems to have been the originator and it's unlikely the other author was even aware of this novel.

So, the plot of The House That Kills isn't erected on the soundest of foundations, but I never want to be too harsh on debut novels. After all, John Dickson Carr's legacy began with It Walks by Night (1930) and who am I to judge. If I wrote a locked room mystery, the result would be exactly the same. Who gives about in-depth, character exploration? There's probably a body behind that locked door and certainly one in that field of unbroken snow outside!

I really wish I could be glowingly enthusiastic about this one, especially because of the time and effort Pugmire has put into translating these novels, but this just isn't a top-tier locked room mystery.

On a final note, I'll contain to knock off some of these recent releases, but I'll return to the Golden Age regularly with the like E.R. Punshon and Stuart Palmer
Geplaatst door TomCat on 6/27/2015