A Journey to Remember

"Evil deeds do return to their source. They always come full circle, and their evil will never end until the circle is broken."
- Dungeon Master (Dungeons & Dragons, The Animated Series)

Every now and then patterns emerge in my reading. They have varied over the years from unwittingly picking up detective stories, one after another, featuring magicians or medieval armory, but they're usually nothing more than coincidences – either that or the ghost of Harry Stephen Keeler has been hanging around longer than we thought.

The mystery novel set at a convention is now officially a pattern, having previously reviewed Isaac Asimov's Murder at the ABA (1976) and Matt Forbeck's The Con Job (2012), with this additional review of Sharyn McCrumb's Bimbos of the Death Sun (1987) – which won the Edgar statuette in 1988 for "Best Paperback Original." Except this time it was premeditated and have no regrets! 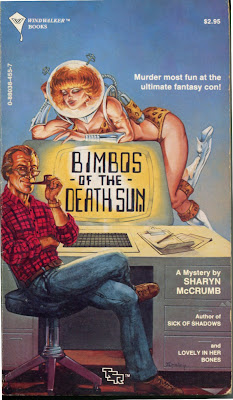 Dr. James Owen Mega is our protagonist and scientist, who molded one of his theories into a hard-science fiction book entitled Bimbos of the Death Sun, which was an "idea" from his publisher, but fortunately, he had the foresight to use a penname and hopes he doesn't bump into one of his students at Rubicon. Mega is there to play second fiddle to the main guest of honor, Appin Dungannon, chronicler of the fantasy adventures of the Viking warrior Tratyn Runewind.

Dungannon can be called a commercial success, whose books have spawned games and a Saturday morning cartoon show Dungannon's Dragons, but ignored when it's time to pass around the awards. Granted, Dungannon's vile temper also does very little for his popularity, however, they make for great anecdotes and draws larger crowds to cons. And I have to admit, I took a liking to that fire-breathing pixy when he spit a verbal dress down at his fans during a costume contest: "shut up, cretin, I'm vilifying you." Delivered like a comedian!

The first hundred or so pages are devoted to these sorts of events that happened at Rubicon, and even though it wasn't my world at all, I appreciated the guided tour that spun a background for murder. I'm always willing to take peek in a strange and different world, and SF/Fantasy fandom is a strange and different world to say the least! Bimbos of the Death Sun takes its time to show you around and meet many peculiar characters roaming the place. Like the visiting Scottish folksinger, Donnie McRory, who stumbles around the con like Arthur Dent slogged through space and time or Monk Malone, who's really good at being a fan, and than there are Clifford Morgan, only man brave/stupid enough to cosplay as Tratyn Runewind while Dungannon is in attendance and the "Guarantuan Femmefan," Brenda Lindenfeld – among other aspiring writers, fanzine editors, wargame players and more fans. I should also mention that the book has a bunch of nifty, comic-style illustrations of most of the characters that you meet.

Another thing worth mentioning is that characters discuss "electronic mail" and deem paper mail as a thing of the past. Home computers, portable printers and technology were firmly present in this story, but they hadn't quite caught up yet with the ideas of their creators/users. But the most interesting part was perhaps to see that these SF/Fantasy cons, from Mack Reynolds' The Case of the Little Green Men (1951) to Matt Forbeck's The Con Job, have stayed the same in spirit. Well, at least in the realm of fiction.

Back to Bimbos of the Death Sun. Appin Dungannon is shot through the heart in his hotel room, while putting the finishing touch to his latest fantasy epic, and is found slouched with a spilled bottle of scotch next to him  – with the printer spitting out pages. Lt. Ayhan is put in charge of the investigation and he can't stop extrapolating how much he loves this case based on how different it is from the usual crimes he has to investigate, but it's Mega who draws out the murderer during a deadly game of Dungeons & Dragons. I was surprised how quick I caught on to Mega's plan considering that I know next to nothing about the game and coupled with the unusual motive made for quite a satisfying conclusion. Bimbos of the Death Sun was not an elaborate and complicated affair, but everything came together in the end and made sense – making this a fast paced and fun read that I recommend unreservedly.
Geplaatst door TomCat on 4/28/2013